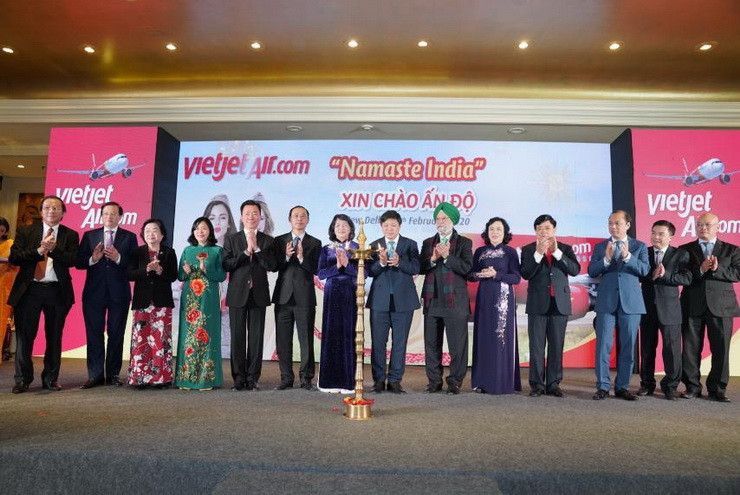 Vietjet has marked an important milestone with India, one of the world's leading aviation markets with a population of up to 1.3 billion people, with the opening of five direct routes connecting Vietnam’s largest cities, Hanoi, Ho Chi Minh City, and Da Nang, with the capital city of New Delhi and Mumbai in India. The opening ceremony was witnessed by the Vice President of the Socialist Republic of Vietnam Dang Thi Ngoc Thinh and Honorable Minister of Civil Aviation in India, Hardeep Singh Puri.

Speaking at the ceremony at Noi Bai International Airport, Vice President of the Socialist Republic of Vietnam Dang Thi Ngoc Thinh, said, “Vietjet’s direct flight opening records a milestone not only for the development of the airline but also marks the traditional bilateral relations between Vietnam and India. The airline’s new route announcement ceremony of direct flights connecting Hanoi and Ho Chi Minh City with Mumbai; Hanoi, Ho Chi Minh City and Da Nang to New Delhi on my official visit to India will contribute to promoting the pillars of the Vietnam-India comprehensive strategic partnership, boosting mutual development in term of politics, national defense, security, economy, commerce, tourism and cultural exchange. I am confident that Vietjet will continue to be the leading airline in exploring and commencing direct services to other potential markets in the future.”

Honourable Minister of Civil Aviation in India, Hardeep Singh Puri, also said during the ceremony held in New Delhi, “India today is already the world’s third largest domestic civil aviation scene. In 2018 – 2019, the trade between India and Vietnam grew at an annual rate of 12.81% and reach USD13.69 billion. And I believe that the economic relations of both countries will grow exponentially thanks to direct air connectivity of Vietjet as announced today. Congratulations Vietjet.”

India is one of the world’s largest and most populous countries with 1.3 billion people and is forecasted to surpass China’s population in the next few decades. Vietjet plans to commence more routes to multiple destinations in the country. Besides the incredible capital of New Delhi, Mumbai serves as one of India's most important financial and economic centers and is an enchanting destination. India is also well-known for its ancient and captivating lands with treasures of cultural heritage, colourful festivals and historic religious sites. Vietjet’s direct routes will also bring many passengers from India to fascinating destinations in Vietnam such as Hanoi, Ho Chi Minh City and Da Nang. Visitors can also easily connect with other cities and countries across the Southeast and East Asian region with Vietjet’s expansive domestic and international networks.

Heading toward a green future with the aspiration to work towards a green planet for humanity and for future generations, Vietjet continues to make efforts to offer travellers more flying opportunities with the airline’s fuel-saving and eco-friendly fleet at reasonable prices. Miss Intercontinental Karen Gallman also features in the new-age carrier’s program called "Protect the planet - Fly with Vietjet”, which involves a series of environmental initiatives, such as “Let's clean up the ocean”, “Take action against plastic waste”, as well as charity activities in India and much more. As an ambassador for Indian tourism, she will join Vietjet’s mission to protect the earth while promoting travel opportunities for people around the world.