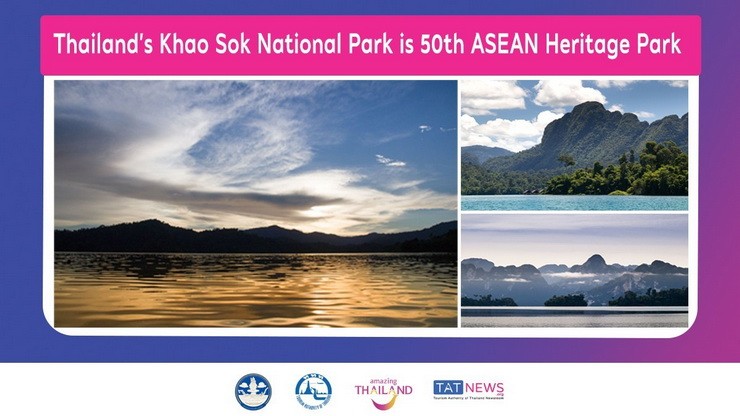 Bringing the number of ‘ASEAN Heritage Parks in Thailand’ to seven.

Well-known for its unique landscape of limestone cliffs towering up from a reflecting reservoir, Khao Sok National Park features a rugged mountain range with a small plain. The beautiful nature and abundant wildlife make the Park a worthwhile visit. It became established in 1980 as Thailand’s 22nd national park and covers a total 738.74 square kilometres in Phanom and Ban Takhun districts of Surat Thani.

According to the ASEAN Centre for Biodiversity (ACB), wildlife species thriving in the park include the vulnerable species Mainland Serow (Capricornis sumatraensis) and the endangered Malay Tapir (Tapirus indicus), as well as the largest flower Rafflesia Kerrii Meijer and the endemic flowering plant species Khaosokia caricoides. Khao Sok is adjacent to the Ratchaprapha Dam that generates power supply to its surrounding communities.

The ACB, as the Secretariat of the AHP Programme, facilitates the rigorous evaluation process of the nominated protected areas to be declared as an AHP.

The environment ministers of the ASEAN approved the nomination of Khao Sok National Park as the 50th ASEAN Heritage Park as endorsed and recommended virtually by the 31st Meeting of the ASEAN Senior Officials on Environment (ASOEN) and the 22nd Meeting of the Governing Board of the ACB, with Vietnam as host, on 24-25 November, 2020.

The ASEAN Heritage Parks are defined as “protected areas of high conservation importance that together, preserve a complete spectrum of ecosystems representative of the ASEAN region”. The objective of this recognition is to create greater awareness, pride, appreciation, enjoyment and conservation of the ASEAN heritage through the establishment and support of the local network in the reserved regions, and to establish collaboration between the member countries in preserving nature.

The protected areas to be announced as ASEAN Heritage Parks will be nominated by the government of each country and be evaluated by the ASEAN member countries. The criteria are” its ecosystem must be abundant, be representative of the region, well-reserved, highly important in terms of preservation, clear boundary of the borders, unique, and important for biodiversity culturally and biologically.