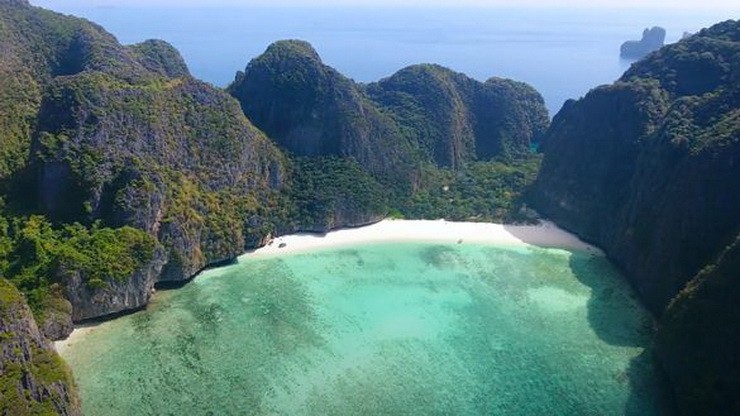 Scuba diving in the Andaman Sea can often offer some of the best experiences in the world, thanks to its dazzling and colourful marine life.

Since the planes grounded and the world stood still, Phuket has been improving its infrastructure and preparing to once again be a holiday destination for tourists from all around the world. In this time, Phuket has also significantly improved the health and abundance of its surrounding marine life.

Some improvements have been intentional, most notably the closure of tourist hot spots, Maya Bay, Koh Tachai and Koh Yoong areas within the marine parks. Some changes have taken place naturally due to the fall of mass tourism, such as endangered Leatherback turtles returning to Phuket's sandy shores to lay their eggs.

Danny Boyle's film 'The Beach' made Maya Bay as famous as it is. The depiction of a hedonistic secret paradise in Thailand's hidden crystal-clear bay encouraged a huge surge in tourism to the area. Despite the fact that 'The Beach' was supposed to be located in the Gulf of Thailand, closer to Samui, Koh Phang Ngan and Koh Tao, Maya Bay was the location chosen for the film, for its magnificent limestone cliffs and enticing turquoise waters. Chasing paradise consequently influenced thousands of tourists to visit the small area every day and this came at a price.

With hundreds of speedboats and hoards of people littering the bay, a visit to the iconic Thai beauty attraction was at most uncomfortable. The authorities closed Maya Bay completely back in 2018, to help regenerate and preserve the bay, and the results have been outstanding.

A testament to Thailand's efforts to address the negative impacts of tourism and marine life has been the successful closure of Maya Bay. Maya Bay now has well over 100 black-tip reef sharks according to the Department of National Parks in Thailand. As of now, the shark population in Maya Bay is the highest in Thai waters. A growing resident shark population indicates that tourist destinations are better off after closure either permanently or temporarily.

Due to the closure of beaches through Phuket's first lockdown and the drastic reduction in tourist numbers, rare Leatherback turtles have returned to the beaches to lay their eggs. Leatherbacks are the world's largest species of sea turtles and are listed as endangered in Thailand. Dr Kongkiat Kittiwatanawong, the director of the Phuket Marine Biological Center, said this is the greatest number of leatherback sea turtle nests that Thailand's beaches have seen in 20 years.

Holger Schwab, Managing Director of Sea Bees Diving, Phuket's longest-serving dive company says, “Pandemics may be awful, but they are teaching us valuable lessons. Most of those lessons relate to humans' treatment of the Earth. It's possible that these lessons will spark a long-term change in conservation.”  He continues, “Perhaps this means a different type of tourism model in the future, slower and more considerate of the ecosystem we are working within”.

Scuba diving in the Andaman Sea can often offer some of the best experiences in the world, thanks to its dazzling and colourful marine life. Divers of all levels can dive the world-class dive sites, including Richelieu Rock, all year round in Phuket's surrounding warm, calm water.

During the first stages of reopening the region to tourism, Phuket can now offer much richer underwater experiences to visitors. Some of the most sought-after diving spots in the region, including Hin Deang and Hin Muang, are now much quieter and a joy to dive.

Holger Schwab comments, “We are seeing an increase in certain species, there's more Anemonefish and Barracuda in the Andaman Sea than ever before”. He continues, “A more sustainable approach to both enjoying our underwater world and preserving it has been needed for a long time, and we hope that the effects of the pandemic prove to be positive in this regard for the marine parks in the Andaman region”.