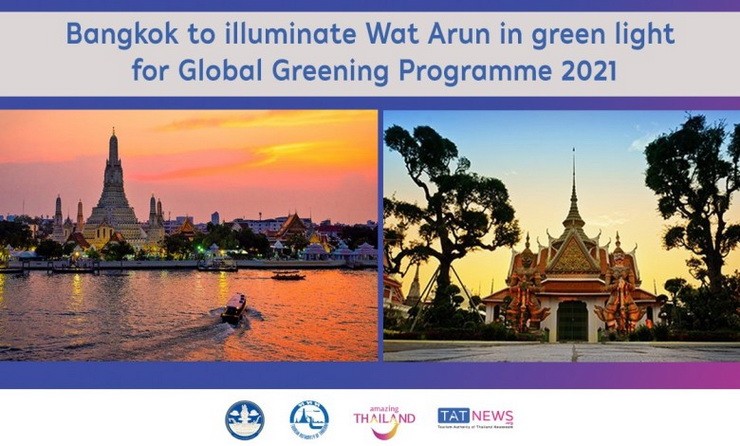 From 19.00-22.00 Hrs., Wat Arun, the icon of the Thai tourism industry, will be bathed in emerald light along with other buildings around Bangkok taking part in the initiative. These include the Thailand Cultural Centre, Conrad Hotel, 208 Wireless Road Building (home of the Irish Embassy), and All Seasons Place, among others.

The move means to publicise Thailand’s positive image to the world, in addition to foreign embassies and communities based in Bangkok and pave the way for future sustainable development in the Thai capital.

The Global Greening initiative first began 11 years ago in Australia, when the Sydney Opera House was illuminated in green on 17 March, 2010, to mark St Patrick’s Day. 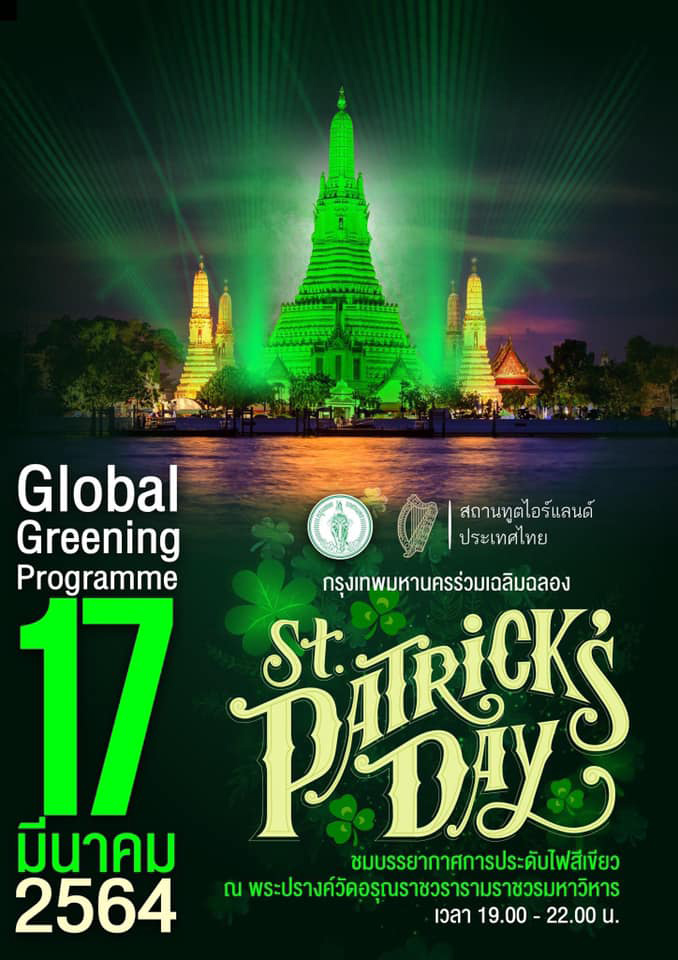 In addition to Wat Arun, other new sites taking part include Gwrych Castle in Wales, The Palm Fountain in Dubai, the Torre Costanera in Chile, Bled Castle in Slovenia, Pacific Park on the Santa Monica Pier in California, BC Place in Vancouver, the Sekenani Gate at the Maasai Mara National Reserve in Kenya, and Villa E-1027 in Roquebrune-Cap-Martin in France.

These new sites will join ‘old favourites’ which have gone green in past years including the Leaning Tower of Pisa, Niagara Falls, Victoria Falls, the ‘Welcome’ sign in Las Vegas, the London Eye, the Sky Tower in Auckland, the Prince’s Palace of Monaco, and the Cibeles Fountain in Madrid to name just a few.

Wat Arun, also popularly known as the ‘Temple of Dawn’, is considered one of Bangkok’s world-famous landmarks, given the beauty of its architecture and fine craftsmanship, and is one of the most-visited tourism sites in all of Thailand. A historic renovation of its 66.8-metre-high main pagoda was recently completed, which is decorated with seashells and bits of Chinese porcelain that glimmers in the sunlight.