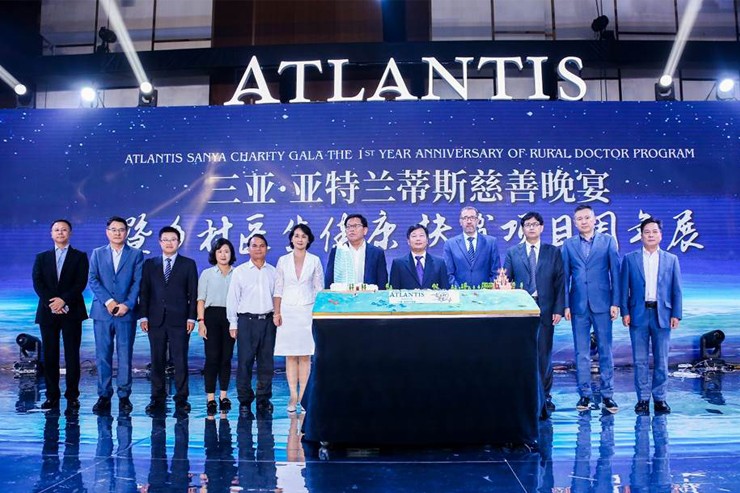 A total of RMB155,894 was raised during the live auction, while other guests collectively donated more than RMB 100,000. All donations raised will be used for the Rural Doctors Program.

Sanya, China – The Atlantis Sanya Charity Gala Dinner in celebration of the resort’s first year anniversary on 28 April raised a total of RMB255,894 from live auction and donations, as Atlantis Sanya, FOSUN Foundation and the China Population Welfare Foundation (CPWF) jointly pledged their support for the Rural Doctors Program.

A total of RMB155,894 was raised during the live auction, while other guests collectively donated more than RMB 100,000. All donations raised will be used for the Rural Doctors Program.

The Atlantis Sanya Charity Gala Dinner also marked the beginning of the Rural Doctors Donation Drive, a cooperation between Atlantis Sanya and the CPWF. Starting from 28 April, 2019, all visitors and resort guests of Atlantis Sanya may voluntarily donate CNY 5.17 (phonetically resembling “We Together” in Mandarin) during their visit. All donation proceeds will go to poverty reduction efforts for a better tomorrow in the Rural Doctors Program.

In addition, the charity gala marked the expansion of the Rural Doctors Program, with the CPWF and FOSUN Tourism and Commercial Group and FOSUN International announced plans to designate another 12 national impoverished counties in addition to the existing 37 sites, bolstering efforts to gradually lift those in need of aid out of poverty through the Rural Doctors Program.

Mr. Qian Jiannong, Chairman, Executive Director and CEO of FOSUN Tourism and Commercial Group, said: “Since its opening, Atlantis Sanya has posted operational revenue of RMB750 million as at the end of last year. We achieved RMB150 million in revenue within the 16-day period of 2019 Spring Festival alone, testifying to the strong branding prowess of Atlantis and synergistic effects of our distinctive FOLIDAY ecosystem at the same time.”

Mr. Heiko Schreiner, Managing Director of Atlantis Sanya, said: “The overwhelming support from our partners and the community is a pillar fundamental to all of our glorious achievements. We firmly believe that Atlantis Sanya will continue to be an ‘iconic tourism hotspot’ in Sanya throughout the course of 2019.”

A number of awards were presented at the gala event including Best Strategic Partner, Best MICE Partner and Outstanding Overall Contribution.