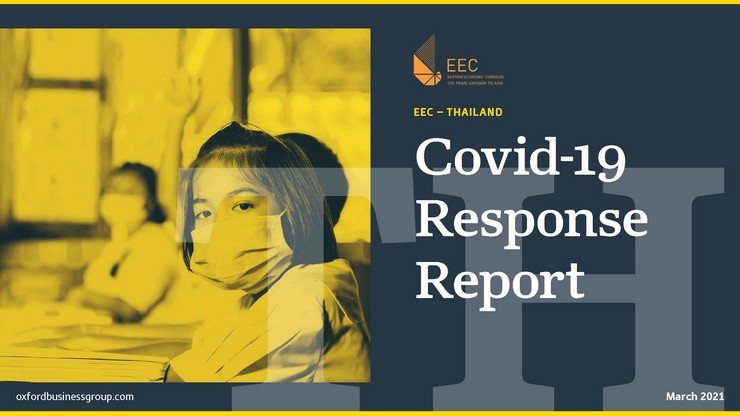 Bangkok, Thailand - Thailand’s transition towards a value-based, high-income economy and the potential for new investments to spur the recovery from the coronavirus pandemic are explored in a new Covid-19 Response Report (CRR) by Oxford Business Group (OBG), produced in partnership with the Eastern Economic Corridor (EEC).

The CRR provides in-depth analysis of Thailand’s response to the pandemic in an easy-to-navigate and accessible format, focusing on key data and infographics relating to the country’s socio-economic landscape.

The country’s pandemic preparedness and the adaptability of businesses and consumers in the face of an unexpected economic and social shock are examined in detail.

OBG’s report tracks the progress Thailand had made before the outbreak in its bid to become an innovation-led economy, driven forward by its 4.0 vision and the development of the EEC.

There is coverage of actions taken to limit community transmission as the virus reached Thailand, as well as the wide-ranging fiscal and monetary policies that were introduced to shore up the real economy and at-risk sectors.

Looking towards the recovery phase, the report documents major infrastructure projects in the EEC and the multiplier effect they will likely have on investment and industrial growth. In addition, the CRR considers the rewards that Thailand is expected to reap from rolling out commercial 5G services, and the new digital growth engines emerging in the EEC as the country quickly adapts to the ‘new normal’.

OBG’s report contains an interview with Kanit Sangsubhan, Secretary-General, EEC Office of Thailand, in which he shares his thoughts on the potential that key areas of business hold for future expansion, led by 5G technology, logistics, health care and smart cities.

“We expect the business environment to normalise by the first quarter of 2021,” he said. “We will try to use the period leading up to full normalisation to connect with new businesses as much as possible. This period also provides the government with the opportunity to accelerate training programmes for the advanced industries attracted to the EEC.”

Andrew Jeffreys, OBG’s CEO, said that Thailand’s efforts to enhance its business environment before the pandemic, combined with experience in navigating health and economic crises, meant it was well placed to deal with the challenges and disruption caused by Covid-19.

“As an economy that relies heavily on exports and visitors, Thailand has inevitably been impacted by the pandemic,” he said. “However, its attractive blend of quality and cost competitiveness, together with a relatively fast economic rebound in China, is expected to support recovery, while the long-term prospects for the tourism industry remain bright.”

The CRR forms part of a series of tailored reports which OBG is currently producing with its partners, alongside other highly relevant, go-to research tools, including a range of country-specific Covid-19 Economic Impact Assessment articles and interviews.