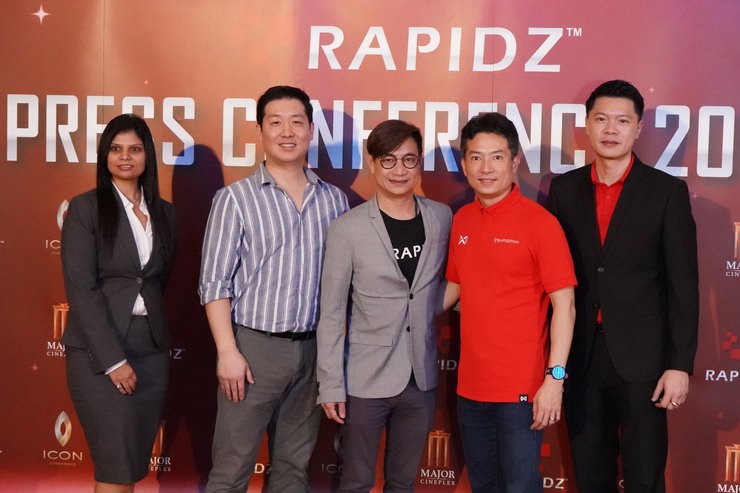 After announcing its launch at the beginning of 2018, RapidzPay has received tremendous interest in its services from businesses and consumers eager to embrace the concept of cashless society in the Thailand 4.0 economy.

Bangkok, Thailand – RapidzPay, a digital payments company from Switzerland, has announced an update to its widely anticipated digital currency launch, along with plans of the opening of its new regional headquarters at Major Cineplex Ratchayothin by end of February 2019. After announcing its launch at the beginning of 2018, RapidzPay has received tremendous interest in its services from businesses and consumers eager to embrace the concept of cashless society in the Thailand 4.0 economy. With this partnership, movie patrons going to any Major Cineplex theatre can now use RapidzPay to purchase tickets, as well as snacks and beverages, via Major Cineplex’s M-Cash with no physical cash transactions required altogether.

Currently, RapidzPay is only available in Thailand with selected participating merchants. Once it has received official approval from Thai authority, market demands for RapidzPay from both merchants and consumers are expected to be skyrocketing. Also, Rapidz will open a crypto-themed café in collaboration with Major Cineplex Group, where major cryptocurrencies are accepted for all goods and services available in the café. RapidzPay will not only be a convenient way to make purchases and transactions, but an excellent avenue to distribute special offers and promotions that are uniquely available only through RapidzPay app, henceforth attracting more active users and encouraging greater usage and market penetration.

RapidzPay’s advantage works on leveraging blockchain technology to create a convenient, secure, and fast unified payment system across borders. Consumers now have an alternative payment option through the RapidzPay app to allow them to spend cryptocurrencies at shops and restaurants with the RapidzPOS. Essentially, RapidzPay works just like any credit card or mobile payment by scanning a QR code to buy goods and services anywhere, but with much lower transaction fees.

Mr Wisara Chokedeetaweeanan, Managing Director of Rapidz Technologies (Thailand) Co., Ltd. said, “Today, Thai people are extremely interested in cryptocurrencies. So the Thai government is exceptionally supportive of endeavours like ours. We are confident that RapidzPay will continuously grow as more people turn to advanced methods of payment such as our RapidzPay. We are also in process of another initial coin offering (ICO) in January next year. Issuing digital currency like this raises more capital and coin circulation to encourage people to use e-payment and e-wallet technologies, which in turn encourages our aim of fostering greater growth towards a cashless society in Thailand.”