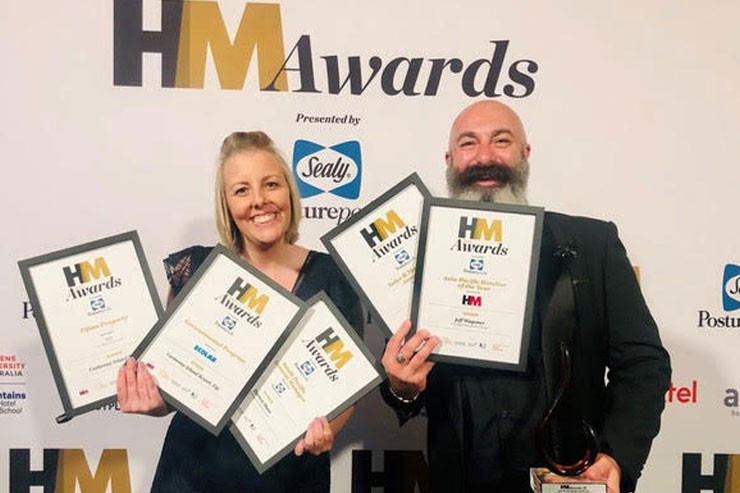 The HM Awards for Hotel and Accommodation Excellence, has earned a reputation as the leading industry awards in the South Pacific, Australia and New Zealand.

Also from Outrigger, Javed Rahim and Rajnesh Kumar were finalists in the Revenue Management Associate category. Navnit Reddy was hailed as a Rising Star.

The HM Awards for Hotel and Accommodation Excellence, has earned a reputation as the leading industry awards in the South Pacific, Australia and New Zealand. The awards celebrate the best properties, departments, people, chains and brands in the region. Each year more than 1,500 nominations are assessed to determine more than 40 category winners.

“On behalf of the entire Outrigger `ohana, we are both grateful and humbled by this recognition,” said Mr Wagoner. “In challenging times for the hospitality industry, Outrigger hosts kept their heads high; they worked hard to prepare for the return of guests and that dedication was recognised at the HM Awards in Sydney.”

As an example, Outrigger initiated Outrigger’s Clean Commitment and worked closely with the Fijian authorities to implement the Care Fiji Commitment. Outrigger hosts created a safe and welcoming experience at its two resorts in Fiji, which reopened to international travel on December 1.

Outrigger has also enshrined environmental care at its Fiji properties through its global conservation initiative called Outrigger’s ZONE (OZONE), which was recognised by the HM judges in the award for Castaway Island, Fiji.

The HM Awards for Hotel and Accommodation Excellence have been operating for 19 years, attracting around 500 accommodation industry professionals to the gala award event annually. Details of the audited HM Awards judging process are available here.