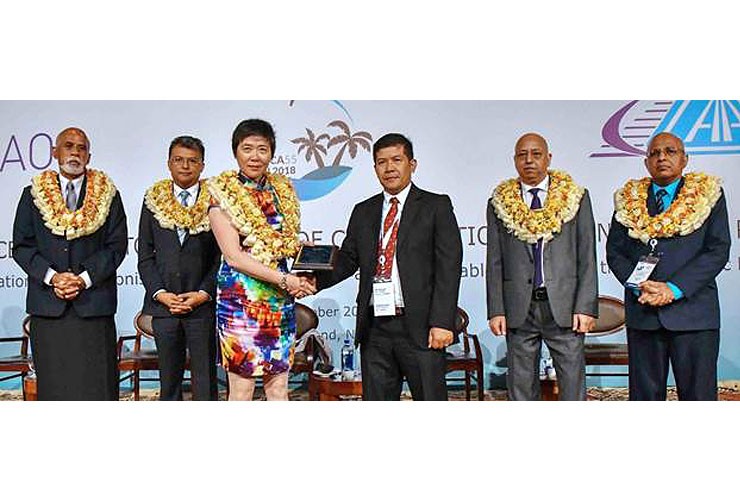 Asia and Pacific meeting draws attention to challenges and opportunities for world’s largest and fastest growing region for air traffic.

MONTREAL – ICAO Secretary General Dr. Fang Liu addressed the assembled Directors General for Civil Aviation (DGCAs) from ICAO’s Asia and Pacific region in Nadi, Fiji, during the opening session of the 55th DGCA Conference on 22nd October 2018  and  stressed the key importance of international travel and trade connections to the event’s host State and others in the Region.

Recognizing Fiji’s “very vibrant tourism sector, and the 40,000 jobs it supports here,” Dr. Liu noted that the aviation connections Fiji had realized would help ensure the sustainability of its current and very healthy socio-economic growth. It highlighted for everyone the direct links between the investments States make in terms of legislation and skilled civil aviation oversight resources to ensure their ICAO compliance, and the aggregate socio-economic prosperity they can eventually realize as a result of those commitments.

Acknowledging the wide State-to-State diversity in the Asia/Pacific Region in terms of economic capacity and development, including with respect to civil aviation infrastructure and regulatory oversight, Dr. Liu underscored “the importance of increased regional cooperation through strengthened Regional Safety Oversight organizations and inter-governmental institutions.”

With the Asia and Pacific Region now established as the world’s largest in terms of the total percentage of global traffic, with more than a third of all commercial flights each year and traffic volumes growing at the fastest rate in the world today at over 11 per cent annually, Dr. Liu placed a critical focus on efforts to ensure that current aviation safety, security and efficiency performance targets not suffer as a result.

The ICAO Secretary General also drew the participants’ attention to recent progress made at ICAO’s 13th Air Navigation Conference on some critical capabilities which will be helpful for the increased coordination Asia and Pacific States must now realize, including “Air Traffic Flow Management (ATFM) and the implementation of Collaborative Decision Making (CDM) for high density airports, and the increased sharing of Air Navigation Services best practices.”

She drew the DGCAs’ attention as well to the ICAO high-level Ministerial Conference convened earlier this year in Beijing, and to the targets it had enshrined in its Beijing Declaration. “The Declaration also underscored the role of data-driven safety methodologies to help us identify and address high risk accident categories, and for both safety and air navigation it strongly encouraged the inclusion of related high-level objectives in your States’ National Development Plans,” Dr. Liu declared.

The Conference concluded on 26th October with the closing speech made by the Secretary General. The Asia and Pacific 55th DGCA Meeting attracted 237 participants from 41 States and 9 international organizations, and commenced with a Fijian traditional opening ceremony of ‘Na Veiqaravi’.  In her closing speech she emphasized that as each Asia and Pacific (APAC) CAA explores its own preparedness to accommodate new and emerging air transport capacities and operations, they should recall at the same time the tenets of ICAO’s No Country Left Behind initiative in terms of both the weaknesses with which they may need assistance, or the strengths which they can share. She highlighted the importance of certifying all international airports by 2020, implementing the APAC Seamless ATM Plan and putting in place their State Safety Programmes (SSPs) by 2025 to fulfill the commitments of the Beijing Declaration.

In the sidelines of the Conference, the Secretary General held several meetings with local Fiji authorities, States and Regional bodies. Notable among them was a meeting with the Solicitor General and Permanent Secretary of Fiji where she discussed the ongoing developments of civil aviation in Fiji and emphasized the importance of investment in civil aviation infrastructure which has direct positive impact on the economy. A meeting of the Directors General of the three COSCAPs of Asia and Pacific Region was organized to promote cooperation and collaboration among the three COSCAPs. The Secretary General presided over a luncheon meeting with the DGs of the Pacific Island States and discussed the progress of the PSIDs Needs Analysis study as well as cooperation strategies with ICAO and other partners to achieve the targets agreed by the APAC Ministers in the Beijing Declaration. In a separate meeting with the Executive Director of EASA she discussed the various cooperation programmes between ICAO and EASA. Dr Liu also met the CEO of Fiji Airways as well as visited the Nadi airport and met with the CEO of Airports of Fiji.  In these meetings she was accompanied by the Regional Director of the APAC Office and the Directors of ICAO’s Technical Cooperation and Air Transport Bureaux.

At the conclusion of its opening ceremonies, Dr. Liu honoured the professionalism shown by Anthonius Gunawan Agung, a young man who sacrificed his life to ensure the safety of a flight of passengers while performing his duties as an air traffic controller during the recent earthquake and tsunami in Indonesia on 28 September. She presented a plaque to an AirNav Indonesia representative who accepted it on behalf of the family of Mr. Agung.