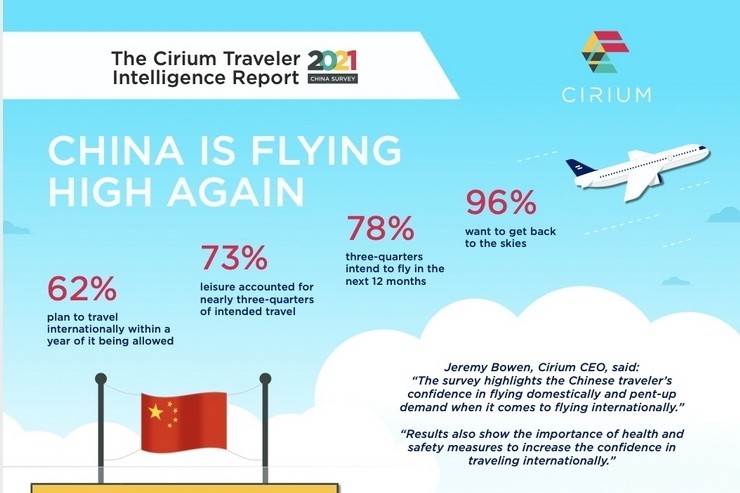 Southeast Asia is the top region of choice for international travel, followed by Europe, Australia/New Zealand and East Asia.

Beijing, China - Chinese travellers are leading the airline travel recovery, with 96% intending to travel, according to a new survey by Cirium, the aviation analytics company. 81% of respondents say they plan to fly at least once within the next 12 months and 50% plan to fly by this autumn. Of those planning to travel, 73% stated it was for leisure with only 24% planning business travel.

The pent-up demand is also reflected in China’s passenger traffic, which is showing signs of a strong recovery. As of September 2021, China traffic was at 87% of 2019 levels — way ahead the rest of Asia (42%).

The survey revealed that two thirds (66%) of Chinese travelers have taken a domestic flight since the start of the pandemic. Cirium schedules data reveal domestic travel in Q4 is primed to outpace pre-pandemic levels, growing by some 15% compared to Q4 2019.

Following months of restrictions aligned to China’s Zero-COVID policy, pent-up demand for a major return to international and regional travel is palpable.

More than half (61%) of respondents shared that they are ready to travel out of mainland China once borders are open, with Southeast Asia as the region of choice, followed by Europe, Australia/New Zealand and East Asia.

Jeremy Bowen, CEO at Cirium said: “The Cirium survey highlights the Chinese traveller’s confidence in flying domestically and pent-up demand when it comes to flying internationally. There is a clear preference for Southeast Asia, so the challenge faced is to bring back travel to other markets such as East Asia, which was a previous top destination.”

“The results also show the importance of health and safety measures, which will need to be in place to increase the confidence in travelling internationally from China.”

While Chinese travellers show confidence in flying again, 35% of those surveyed claimed that they would be less likely to travel by air, post-pandemic. They were principally concerned over health, hygiene and safety.

Almost all of the respondents (96%) support the mandatory requirement to wear a face mask when travelling by air. And over 85% support the introduction of health passports as a prerequisite to flying, and the use of apps that promote touchless travel.

Chinese travellers were divided when it came to the time spent at the airport. 53% of travellers claimed they will reduce the amount of time they spend at airports, compared to 21% who will look to increase their time at the airport as they feel safer with the COVID-19 safety measures in place.

The survey was carried out by independent market intelligence firm AudienceNet on behalf of Cirium. The firm interviewed over 2,060 adults in mainland China between August 30 and September 8, 2021. The margin of error in the reported data did not exceed +/-3% at the 95% confidence level. 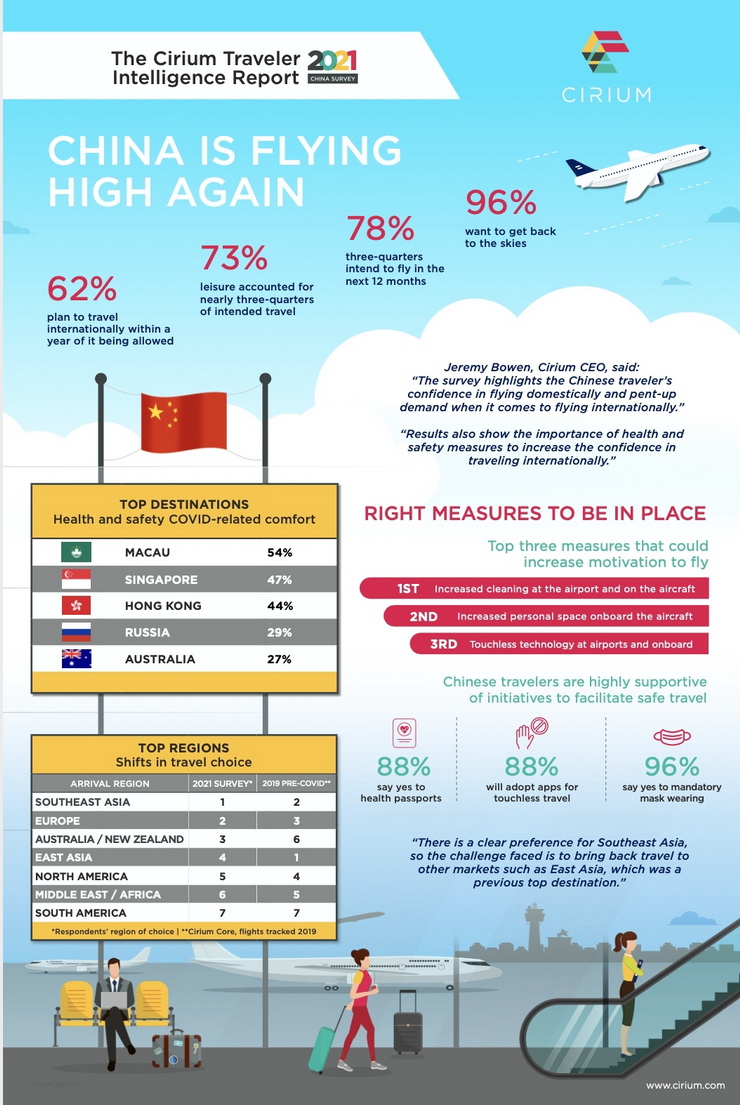