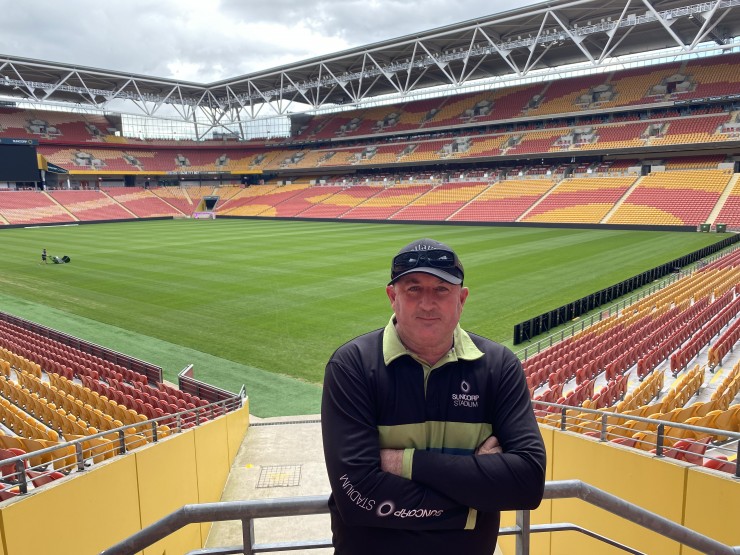 Hong Kong's state-of-the-art multipurpose sports precinct, built on the site of the former Kai Tak Airport on Kowloon, is set for completion in the second half of 2024.

Caddies, renowned for his ability to deliver a first class pitch for multiple World Cup Tournaments and back-to-back international sporting events, will take up his position at the ASM Global managed Kai Tak Sports Park, Hong Kong in October.

Hong Kong's state-of-the-art multipurpose sports precinct, built on the site of the former Kai Tak Airport on Kowloon, is set for completion in the second half of 2024.

Chairman and CEO of ASM Global (Asia Pacific) Harvey Lister AM, said Malcom’s appointment was recognition of his professionalism and dedication during his 19 years at Suncorp Stadium. “Kai Tak Sports Park is set to be one of the greatest sporting precincts in the world and this appointment will highlight Malcolm’s skills in being able to accommodate all sporting codes, delivering world class pitches for international competition.

“The appointment illustrates the value of the ASM Global Advantage. Malcolm applied for this role amongst a strong field of international candidates, and this is proof of ASM Global’s commitment to create rewarding careers for our people.”

ASM Global’s Executive Director at Kai Tak Sports Park, Darren Burden, said it was a privilege to welcome Caddies to the outstanding team responsible for delivering one of the world’s greatest sporting venues. “Malcolm has a fantastic reputation and will no doubt make an invaluable contribution to the success and performance of the Sports Park.

“I believe his extraordinary knowledge, experience, and skills as an internationally acclaimed groundsman will bring unique qualities to the role and very much look forward to welcoming him to Hong Kong.”

Caddies said he was extremely proud of all that he and his team achieved at Suncorp Stadium. “Kai Tak Sports Park is an incredible project and I am looking forward to playing my part in making it an enormous success on the world stage.”

Caddies’ new role at Kai Tak Sports Park will involve leading the operation and management of the sports fields and landscape at the Sports Park, as well as managing an off-site Turf Farm. Initially he will work with the design and build team to oversee and advise on the construction and operation of the playing surfaces in the Main Stadium and Public Sports Grounds.