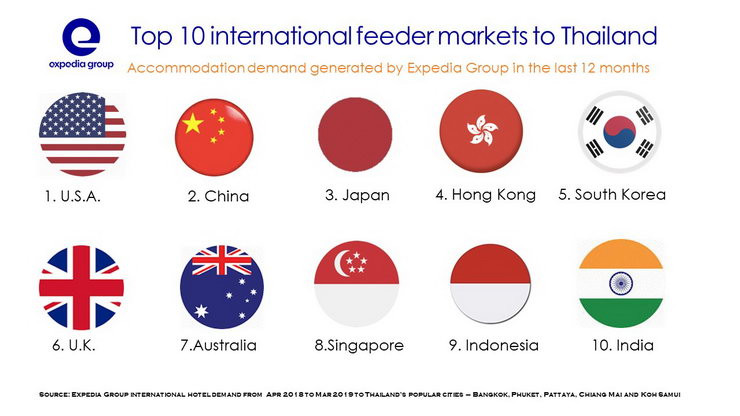 Demand from China and India continue to soar while the UAE, Israel and South Africa are the new emerging high-value markets.

Bangkok, Thailand - Expedia Group, the world’s travel platform released its latest hotel demand trends to Thailand.[1] Thai accommodation partners are enjoying steady growth as evidenced by Expedia Group’s data, which showed the overall inbound demand to Thailand has increased by 10% Year-on-Year (YoY) over the past 12 months.

Based on demand generated by Expedia Group’s extensive portfolio of travel brands, U.S.A. remains as the largest market to Thailand, with demand growing by 20% YoY. China now is the second largest market to Thailand, surpassing Japan, Hong Kong and South Korea for the first time in the past two years. Alongside with China’s strong performance, India also upped its game, moving up three ranks to gain a place in Thai’s top 10 international markets [2].

What’s noteworthy is that Chinese and Indian travellers show a growing appetite for premium accommodation – more than 60% of the bookings made by Chinese, 55% of bookings made by Indians were in 4-star and 5-star hotels. This trend is in line with Thai’s government focus to attract more high-end arrivals from China and India.

In terms of popular destinations, Bangkok, Phuket and Pattaya, unsurprisingly, are the most visited cities among Chinese and Indian travellers. Hua Hin (110% YoY), Koh Phi Phi (100% YoY) and Koh Lipe (100% YoY) emerge as the rising markets with triple-digit demand increase during the same period.

Recent research found that 80% of international travellers, regardless of age, believe it would be helpful to book accommodations in one place.[3] Coined with such trend, Expedia Group’s data confirmed that the rising demand for one-stop shopping experience has attributed to a 50% YoY increase in international Package bookings.[4]

Expedia Group’s Packages, or combined hotel, airfare and/or car bookings /or tour and activities, offer valuable benefits to hotels, as well as consumers. On the one hand, it gives travellers the ability to efficiently book their trips in one-go, saving money and time, and on the other hand, package bookings are a great way for hotels to build a strong base of customers without eroding their retail rates.

In particular, the data uncovered that Chinese travellers are the driving force behind the strong demand for Packages into Thailand - almost one in three international Package bookings were made by Chinese. China is also the fastest growing market for Packages as demand skyrocketed by 200% YoY. India is trending in the same direction, with package demand up by 160% YoY. Other markets tracking triple-digit growth in package demand include Ireland (130% YoY), South Korea (120% YoY) and Indonesia (100% YoY). “We are pleased to see Expedia Group is contributing to the country’s grand scheme of tourism growth,“ said Pimpawee Nopakitgumjorn, director, market management at Expedia Group, “Accommodation players who look to build a strong base of international customers should consider our unique package offerings, as we know international package bookers coming to Thailand typically, stay half-day longer, pay 10% more on accommodation and 50% less likely to cancel their bookings, compared to those who booked standalone deals[5].”[6] Diving deep into some new emerging international markets that showed impressive growth momentum, Expedia Group confirms that the UAE, South Africa and Israel are the new high-end markets for hoteliers to capitalise on. Travellers from these markets typically spend 15% more on accommodation and stay 1 day longer than the average international counterparts. Moreover, a whopping 70% of the total bookings made by these nationalities were in 4-star and 5-star hotels where travellers paid 50% more on daily accommodation.

When it comes to popular destinations, UAE, South African and Israeli travellers prefer staying in Bangkok to experience the bustling metropolitan vibe, or chilling at the beachside in Phuket, Pattaya, Koh Samui and Koh Phangan.

[1] Based on Expedia Group data on inbound hotel demand to Bangkok, Phuket, Pattaya, Chiang Mai and Koh Samui from April 2018 to March 2019, compared to the same period in the previous year.

[2] Based on Expedia Group data on inbound hotel demand to Bangkok, Phuket, Pattaya, Chiang Mai and Koh Samui from April 2018 to March 2019, compared to the same period in the previous year.

[3] Source: The Centre for Generational Kinetics 2018

[4] Based on Expedia Group data on inbound package demand to Bangkok, Phuket, Pattaya, Chiang Mai and Koh Samui from April 2018 to March 2019, compared to the same period in the previous year.

[6] Based on Expedia Group data on inbound package demand to Bangkok, Phuket, Pattaya, Chiang Mai and Koh Samui from April 2018 to March 2019, compared to standalone international demand during the same period.