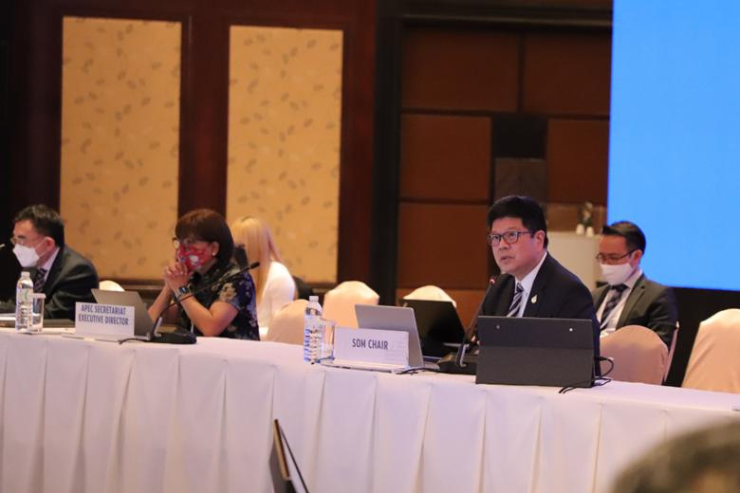 The meeting cluster will culminate in a two-day plenary session of senior officials on 30–31 August, chaired by Thani Thongphakdi, Permanent Secretary for Foreign Affairs of Thailand and 2022 Chair of the APEC Senior Officials.

Chiang Mai, Thailand - APEC officials are meeting now against a backdrop of economic and geopolitical challenges to collaborate and focus on building a more resilient and inclusive future for the region.

The third APEC technical meeting cluster is now underway in Chiang Mai, a city around 700 kilometers north of Bangkok, involving close to 2,000 policymakers, officials and private-sector representatives from 21 economies.

The meeting cluster will culminate in a two-day plenary session of senior officials on 30–31 August, chaired by Thani Thongphakdi, Permanent Secretary for Foreign Affairs of Thailand and 2022 Chair of the APEC Senior Officials. This will be the last meeting of the year before APEC Senior Officials prepare for Leaders’ Week on 14–19 November.

The International Monetary Fund projects the world economy decelerate to 3.4 percent before slowing further to a 2.9 percent gross domestic product (GDP) rate in 2023. The same scenario is expected in APEC, where a recent report projected the region’s economy to grow slower than expected at 2.5 percent this year and 3.4 percent next year.

“It is a particularly challenging time to be a policymaker. We need to keep our focus on building a more resilient, inclusive and sustainable future because this is the key to future-proofing the region from crises,” said Dr Rebecca Sta Maria, Executive Director of the APEC Secretariat.

“The intensified uncertainty brought about by recent events bring along the risk of distrust in globalization, multilateral institutions and in each other,” she said.

“While there’s no denying that disagreements have spilled into multilateral forums and are of significance, they should not keep APEC member economies from banding together to prevent something as existentially damning, as climate change, which will not be fixed, or even managed, by a world divided into distinct blocs.”

Ahead of the technical meeting cluster and APEC Economic Leaders’ Week in November, Dr Sta Maria reiterated that organizations like APEC will play a big part in building back the world’s economy by strengthening policy coordination and regional cooperation when adopting economic resiliency policies as well as ensuring transparency and predictability of trade.

The APEC Tourism Ministerial Meeting will be held in Bangkok on 19 August and will be chaired by Phiphat Ratchakitprakarn, Thailand’s Minister of Tourism and Sports. Reflecting on the severe impact of the pandemic on the travel and tourism industry, the meeting will focus on rebuilding and rethinking tourism for the future, making it more inclusive and sustainable and paying more attention to domestic well-being of tourism destinations.

The APEC Meeting of Ministers Responsible for Forestry will take place in Chiang Mai on 24 August. It will focus on tackling forest-related issues such as combatting illegal logging and associated trade, promoting trade in illegally harvested forest products, strengthening forestry cooperation in the region as well as advancing work on sustainable forest management, conservation and restoration.

The APEC High-Level Meeting on Health and the Economy will be held in Bangkok on 25–26 August. It will focus on bolstering economies’ pandemic preparedness and response to future health threats holistically—through investments in global health security—while fostering the application of new technology and continue the sharing of experiences and best practices.

The Food Security Ministerial Meeting will be held virtually on 26 August and chaired by Chalermchai Sri-on, Thailand’s Minister of Agriculture and Cooperatives. Countering a food crisis and ensuring the region’s food security is also high on the agenda for APEC. Last year, ministers agreed on a 10-year food security roadmap. This year, Thailand will lead discussions to implement the roadmap and build resiliency against the risk of international food trade disruption.

“In today’s challenging environment,” Dr Sta Maria continued, “there is role for multilateral institutions like APEC to help us confront these challenges in a coordinated, integrated and cohesive manner, and ensure that our work ultimately work brings benefits to people in the region.”

“We will continue to emphasize effective partnerships and cooperation across our region, including between the public and private sectors, specifically, the APEC Business Advisory Council, and other regional fora and key stakeholders, including the youth of our region,” she concluded.