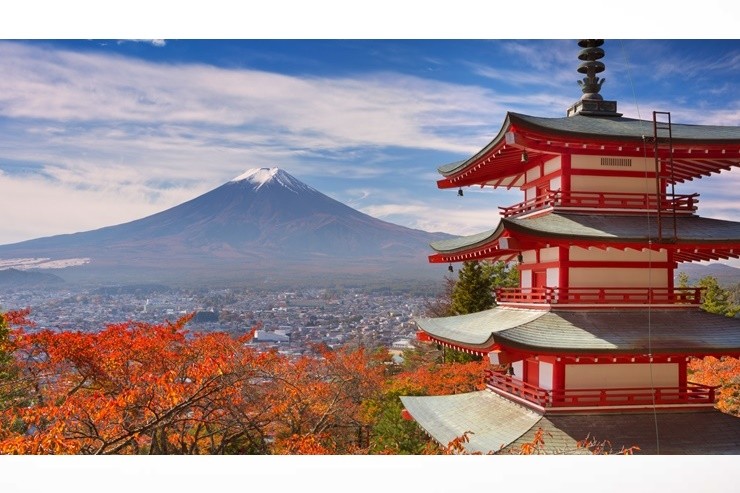 TOKYO - The Agency for Cultural Affairs, Government of Japan, launched an innovative cultural promotion project called "CULTURE GATE to JAPAN" at Haneda airport and the Tokyo International Cruise Terminal for its second year on January 19th 2022. This project, allows artists and creators active in the field of Media Arts to create works based on various aspects of Japanese culture and exhibit them at airports and cruise terminals to convey the appeal of Japanese culture.

Two installations will be on display at Haneda Airport. The first, "NEO-KAKEJIKU", infuses traditional hanging scrolls with technology and in a modern interpretation, and the second installation is based on the theme of 'fireworks'.

The Tokyo International Cruise Terminal will host "+A+" (pronounced "Plus A-Plus"), an exhibition of video works on the theme of the sea and the human heart, curated by TAKEKAWA Junichi  (a representative of David Watts inc.), known for his work as the Creative Director of MUTEK.JP.

The incorporation and blending of inherited traditional culture and cutting-edge technology can be highlighted as an allure of Japanese culture. We will exhibit Welcome Art installations at the airport, inviting visitors to experience and appreciate the confluence of traditional Japanese art with a wide range of contemporary Media Arts, including modern forms of entertainment such as manga and animation, as well as other art forms utilizing technology.

Hanging scrolls mount paintings and calligraphy on places such as alcoves and walls as decoration or to be appreciated. In this exhibit, we have added technology and modern interpretations to that traditional media to establish new manifestations. A monitor has been placed in the center area called the 'honshi,' which is usually adorned by a picture or calligraphy to play videos created by five artists who work in the realm of contemporary Media Arts.

Within the screen that resembles a hanging scroll, the artists and creators present the culture and allure of Japan using new perspectives and methods to greet and inspire airport visitors.

"Hanabi/Fireworks", enchanting spectacles shared by many around the world, has taken slightly unique development path in Japan. Since 17th century, it has been evolving together with the local cultures in various regions throughout this nation and come to hold the cultural significance of the country. Artist, SHIMADA Sayaka, using this global yet local symbol "fireworks", as the means of expression, explores the complex culture of Japan filled with the coexistence of concepts even in histories, philosophies, and aesthetics.

Historically, the fireworks displays are known to have contradicting meanings of "festival" and "memorial service/reposing the souls" and have thrived with both aspects. For this work, SHIMADA focuses on this dualism of the fireworks festival. She collects and analyzes the temporal and geographical data of all the fireworks cancelled in Japan through 2020 because of COVID-19 and creates the actual fireworks that evoke another world that could have been and to honor the lost festivals. The form of the exhibition changes in stages, starting from a video work of the production process and data simulations, and to the installation consisting of used tubes from the actual fireworks launch and filmed footage.

Not only as an artist but also as an award-winning fireworks designer, SHIMADA, envisions to create the world that contrasts the various aspects of fireworks by examining the historical and cultural backgrounds.

Cultural Resource × Artist:
Fireworks ×  SHIMADA Sayaka
The archive of last year's artworks will also be displayed on monitors and panels at FLIGHT DECK TOKYO on the 5th floor of Haneda Airport, Terminal 2, until March 21, 2022*.

*Tokyo International Cruise Terminal is currently closed in accordance with the policies of the Tokyo Metropolitan Government. The exhibition is slated to open at the same time the terminal is re-opened to the public.

While looking out on the sea from Tokyo International Cruise Terminal, in the drifting of the waves that move closer and farther away without ever ceasing, as creators we feel 'time' that is measured by a different scale than the hours of human society and imagine new interactions of the spirit within ourselves and others.

+A+ (Plus A Plus) is an exhibit that uses sound and images to appreciate the 'world' of +A+, an imaginary code that connects to the port. 'A' represents the process of cultural and artistic activities in which 'A'rtists express and 'A'rchive the interaction between the existence of the port that encompasses encounters and traditions, and the sea that 'A'dapts to the contexts of Japanese culture.

The three artists whose works are exhibited here take an introspective cultural view and capture this relationship of the human spirit and the sea as a self-centered world. The work invites you to a vista that touches the spirit, and marks a time that confronts essential questions as rolling waves that surpass the ages. At the Tokyo International Cruise Terminal, discover the 'sea' within your 'spirit,' and together with the view of Tokyo Bay, appreciate these new perspectives of Japan's sea culture through artistic renderedings.