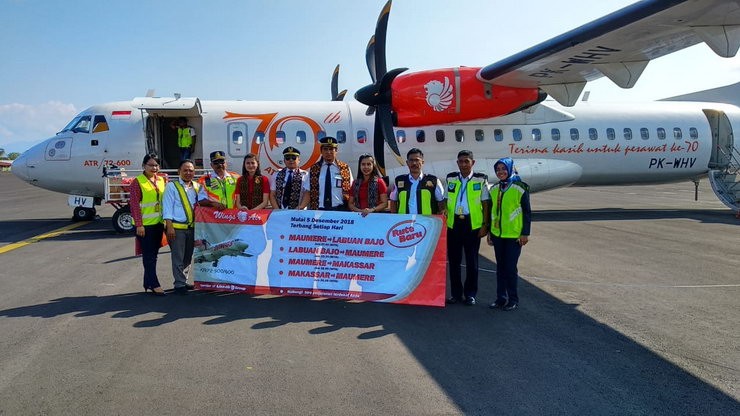 MAUMERE, Indonesia -- Millennial tourists can now explore Instagramable destinations in the Sunda Islands cluster, one of which is Flores Island, East Nusa Tenggara (NTT). Approaching the Christmas celebration, Maumere, which is located in the east of Flores, presents a variety of Nilo Hill spiritual attractions that must be visited. This is where there is the tallest Virgin Mary Statue on Flores. In addition, visitors can stop at the Old Church, still standing for more than a century. Most prominent is the inscription written the name of an early generation priest in Sikka Village. Tourists also should not miss Geliting's oldest market to buy souvenirs, for example local specialty woven fabrics.

Still on the mainland of Flores, the famous western part is Labuan Bajo, West Manggarai as a Komodo habitat. On the other hand, tourist destinations are also equipped with local culture, charming natural landscapes and unique stretching coastlines, including Padar Island, "village over the clouds" Wae Rebo, "spider" rice fields "Lingko, Pink Beach, Gili Laba and spot others.

Moving on from NTT, travelers were not spared being invited to explore the island of Lombok, West Nusa Tenggara (NTB) which is famous for storing a wealth of hidden tourism. The island that gets the title "Paradise of Island" is even known to its Balinese brother who presents the beauty of the beach, natural scenery, culinary flavors, impressive adventures and unique culture.

Whereas Makassar is monetized with beaches, nature, culinary, culture that has been busy talking about its beauty. The most important thing is the transit city in eastern Indonesia that is suitable for developing the business.

To go to these cities, Wings Air's best flight service (IW code) is available for members of Lion Air Group. Starting December 5, 2018, opening a new route by connecting South Sulawesi and Nusa Tenggara. The frequency of each flight one time every day. Wings is expected to be able to provide new transportation options that are more affordable, fast and easy. Wings Air operates turboprop type aircraft, which will make the travel experience of tourists and businessmen even more memorable. ATR 72-500 or ATR 72-600 with a capacity of 72 passengers in economy class.

Operations Director of Wings Air, Capt. Redi Irawan, stated, "On behalf of Wings Air, we are grateful for the support of various parties who helped operate the opening of six new flights connected to Makassar, Maumere, Labuan Bajo, Lombok, going home (pp), thus facilitating the inauguration process today. Our commitment always connects district level with other districts / cities, one of which is between Southeast Nusa Tenggara. It is our hope that interconnectivity will be realized to provide added value for tourists and business people in traveling and accelerate logistics distribution. "

"Strengthening networks in Lombok and Labuan Bajo as well as Wings Air's steps in line with efforts to support government programs for economic equality and support the Indonesian Ministry of Tourism to achieve 17 million tourists to Indonesia, including the development of" 10 New Bali destinations, among the top ten tourism destinations namely Mandalika Lombok (NTB) and Komodo Island (NTT)," said Capt. Redi.

This new route has advantages for travelers and businesses, which can be transit in advance to spend vacation or business time in these cities. Makassar, Maumere, Labuan Bajo and Lombok play an important role in the right choice in continuing the journey, because Lion Air Group (Lion Air, Batik Air and Wings Air) has provided connecting flights that can accommodate needs from or to other destinations.

Through Praya Lombok, you can visit cities such as Semarang, Bima, Sumbawa, Kupang, Banjarmasin and other exotic destinations in the Nusa Tenggara cluster.

Meanwhile, travelers in Labuan Bajo and around, plans to explore more broadly into NTT will soon be realized. From Labuan Bajo you can fly to Denpasar / Bali, Ende, Kupang, Bajawa and other cities.

Until now, Wings Air has flown to 118 domestic and foreign destinations. For regional networks, it has served to Kuching, Malaysia. Wings Air has a frequency of more than 350 flights per day supported by 64 ATR 72-500 / 600 aircraft.