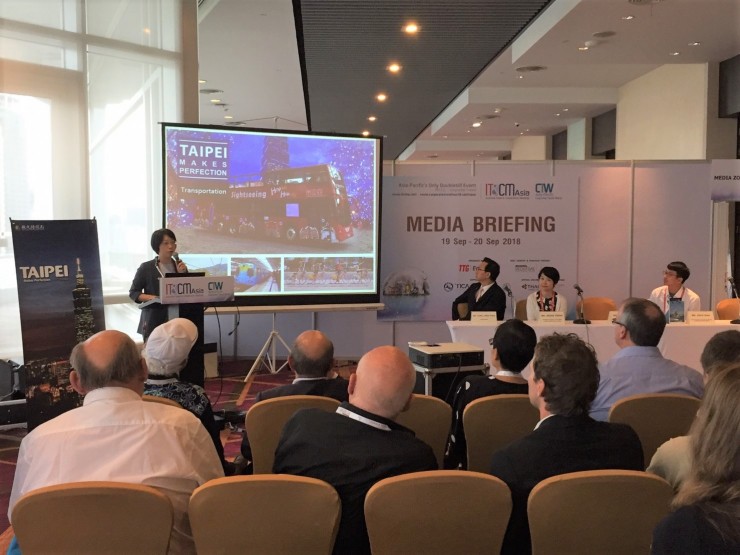 According to new statistics released by the Taiwan Tourism Bureau, Ministry of Transportation and Communications, the number of visitors to Taiwan from the countries of Southeast Asia in the first half of 2018 broke through the 120,000 mark, growth of 17% over the same period last year. Thailand is one of the strongest source markets. Since visa-free entry was offered to Thai travelers as part of the New Southbound Policy in August 2016, growth in the numbers of visitors to Taiwan from Thailand has been pronounced. The number of travelers in 2017 was 292,534, double the number recorded in 2014, clearly demonstrating surging interest in Taiwan travel in the Thailand market. In addition to expansion of the general tourist market, corporate incentive travel is another area of opportunity that requires active initiatives. This year, after sending promotional teams on July tours to a number of Southeast Asia MICE markets (Philippines, Singapore, Malaysia), from September 18 to 20 the Department of Information and Tourism, Taipei City Government has had a team in Bangkok, Thailand attending IT&CMA 2018. At this large-scale annual Asia MICE gathering, the team has endeavored to attract the attention of more Southeast Asia international buyers.

At negotiations and in a press conference, Chun-Chieh Hsiao, Chief Secretary with the Department of Information and Tourism, Taipei City Government (DOIT), introduced Taipei’s diversified incentive-travel sponsorship program to international buyers, along with the Taipei Double Decker Sightseeing Bus service and Taipei Fun Pass. Taipei is also now an officially recognized Michelin culinary bastion, and in order to create deeper impressions promoting Taipei among international buyers, during the exhibition international buyers were invited to don chef hats and aprons at the Taipei stand and take part in a Wheel of Fortune disk-spin show challenge. Using this implement from traditional culture to create a Wheel of Fortune fun game, international buyers got to know the cuisine from Michelin’s Taipei BIB Gourmand selections. In order to win the pineapple cakes that are one of Taipei’s most popular souvenir purchases, along with the limited-edition Taipei City mascot Bravo Kuai Kuai Birthday Gift Snack Bags on offer (Bravo is Taipei’s cute bear mascot), the buyers competed with great gusto, the lively atmosphere making the Taipei stand one of the focal points of the exhibition.

Chun-Chieh Hsiao stated that as a result of the granting of visa-free entry to visitors from Southeast Asia, there were 44 cases under DOIT’s MICE incentive-travel sponsorship program last year. This year, as of September there have already been 47 incentive-travel applications. Over the past two years 90% of incentive-travel applications have been for Southeast Asia incentive-travel groups, demonstrating that Taipei City has become the latest hot incentive-travel destination for Southeast Asia enterprises. In November this year an incentive-travel group from an internationally renowned Malaysian direct-sales enterprise is coming to Taipei, consisting of 1,000 outstanding employees. They will be in the city for a 5 day, 4 night visit consisting of incentive travel and a business conference, and will stay at famous Taipei hotels for the duration (Far Eastern Plaza Hotel, Sunworld Dynasty Hotel, Capital Hotel, Fullerton Hotel, etc.). As part of their itinerary the entire group will visit the Chiang Kai-shek Memorial Hall to practice tai chi, take in the city’s famous sightseeing attractions, browse and shop in its commercial districts, and at night sample local snack delicacies at night markets. It is hoped that this incentive-travel tour experience will bring new creativity and inspiration to the employees of this company. In addition, DOIT has specially prepared 1,000 exclusive tailor-made EasyCards for members of the incentive-travel group, each with NT$200 in additional stored value. This will enable group members to fully enjoy the convenience of traveling around the city, and even more fully experience Taipei’s charms. It is estimated that this group will bring NT$41 million in tourism-industry value to Taipei City (see Note). The consumption power of groups from direct-selling enterprises is impressive, and in the future DOIT will systematically seek to lure such incentive-travel groups to Taipei.

According to the “Annual Survey Report on Visitors' Expenditure and Trends in Taipei” for 2017 released by DOIT, 90% of overseas tourists who visit Taiwan visit Taipei City. At this particular exhibition, it was demonstrated that there is high satisfaction among international buyers with Taipei’s transportation convenience and the overall tourism experience, and that Taipei City has already established a firm position in the Asia MICE market. The processing of applications for the 2019 DOIT MICE sponsorship program are expected to be handled in the period from November 1 to 30, 2018. Elsewhere, the official opening of Hall 2 at the Nangang Exhibition Center is set for March of 2019, and the curtains will go up at 5 new international hotels in the Greater Taipei Area by the end of this year (Courtyard by Marriott, Hotel Indigo, Kimpton Hotel, Just Palace Hotel, Hilton Taipei Sinban). The year 2019 will be one of upgrading for Taipei’s meeting/exhibition hard and soft infrastructure, further strengthening the city’s advantages and competitiveness.

Note: According to the “2017 Annual Survey Report on Visitors' Expenditure and Trends in Taipei” for 2017 released by DOIT, the average spending for visitors in Taipei for sighsteeing is US$274.29 per person per day; with the incentive-travel group in question staying 5 days, and using an exchange rate of NT$30 for US$1, the tourism-industry value will be an estimated NT$41,143,500.