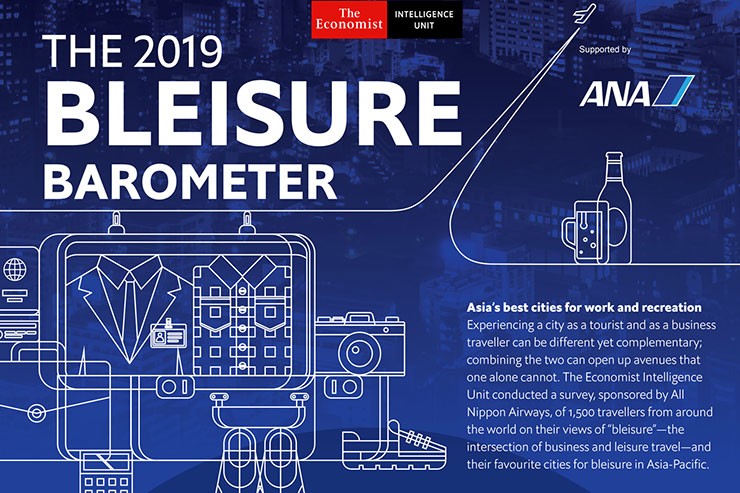 Tokyo ranks first out of 26 cities in the region for its combination of business and leisure-or bleisure-appeal for travellers.

As corporate travel booms across Asia-Pacific, the concept of bleisure is gaining traction, spurring the region's cities to better integrate opportunities for leisure amid busy business trips. The 2019 bleisure barometer: Asia's best cities for work and recreation, sponsored by All Nippon Airways, reveals that while Asia's best bleisure destinations provide the right balance of business activity, high-quality infrastructure and top-flight leisure experiences, a number of less obvious choices stand out as well.

Cities were scored out of five possible points, with scores tabulated from responses of a survey of 1,500 business travellers from around the world, asking them about a variety of factors impacting business travel, such as ease of transportation and availability of consumer goods and services. Scores were used to determine rankings as well as star groupings, with five-star cities scoring above the average and one-star cities scoring below.

One significant finding from the study is that Asia's best cities for bleisure are not necessarily its most liveable. Although the specific questions used in the survey were inspired by ourGlobal Liveability Index, some striking differences emerge. For example, wealthy cities such as Auckland, New Zealand, and Adelaide, Australia, sit atop the league tables for liveability, but drastically underperform on bleisure. Meanwhile, Shanghai and Beijing, while rarely considered highly liveable, show their rising business might in the bleisure study, filling the four-star tier.

The study also assesses specific aspects of the bleisure experience, such as what makes for a successful business trip and what travellers look for in their leisurely diversions. On the former question, ease of transportation takes the top spot, followed closely by safety and orderliness of streets/urban areas and quality of business facilities. On the question of leisure activities, dining out won by a large margin, with visiting local historical or heritage sites and going to an art museum/gallery ranking second and third.

According to Naka Kondo, editor of the report: "Cities in Asia-Pacific should take note: facilitating leisure experiences for corporate travellers can be the key to differentiating in a crowded business travel market. Some of the top cities in our bleisure barometer are already world leaders in this regard, while others can learn from the best in improving access to the intersection of business and leisure travel in the region."

In December 2018-January 2019, The Economist Intelligence Unit conducted a survey of 1,500 business travellers, sponsored by All Nippon Airways, to assess the quality of bleisure experiences-including both ease of doing business and quality of leisure activities-across 34 cities in Asia. Cities receiving fewer than 50 responses were excluded from the final analysis, resulting in 26 cities in the final list. Cities were assigned scores out of five points; scores were then used to determine rankings and placement in star groupings, from one to five stars. City scores on corresponding indicators in the Global Liveability Index were not tabulated into the final bleisure scores but are presented in the white paper for comparison.