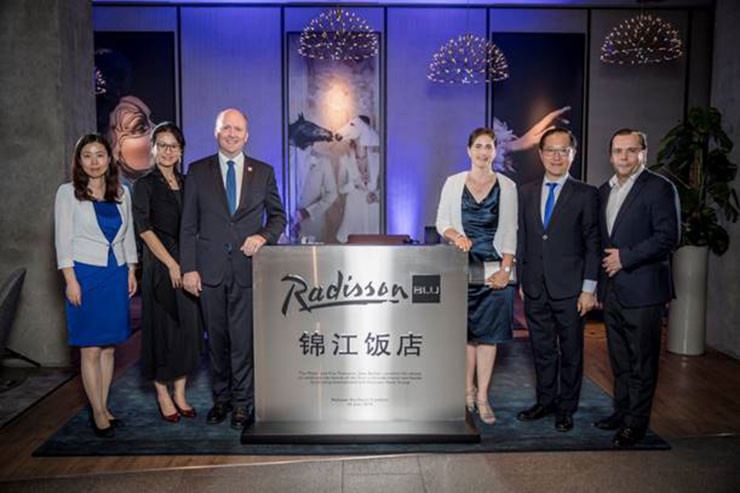 The Radisson Blu Hotel, Frankfurt in Germany is the first property to be co-branded with Jin Jiang International.

Following the Group’s acquisition by Jin Jiang International and Sino-Cee Fund late last year, Radisson Hotel Group and its shareholders have together identified several opportunities to realize the true potential of the Chinese market. Key initiatives have been defined, with the launch of co-branded hotels being a critical element of the project. The Radisson Blu Hotel, Frankfurt in Germany is the first property to be co-branded with Jin Jiang International.

Federico J. González Tejera, President & CEO of Radisson Hospitality AB and Chairman of the Global Steering Committee for Radisson Hotel Group, said: “We are keen on offering the leading hotel brands from Radisson Hotel Group to guests, owners and talent around the world. The launch of the first co-branded hotel with Jin Jiang International is an important milestone in reaching this goal. The co-branded hotels have a bright future, with the potential to extend to more than 30 properties across EMEA – including five Radisson Collection hotels in key destinations for Chinese travelers.”

Chen Liming, Vice Chairman of the Board for Jin Jiang International, said: “We are thrilled that we will now take the next step in our journey together after the acquisition. China has become the world’s largest travel market, offering a wealth of opportunity and potential. Co-branded hotels are positioned to not only improve awareness of our Chinese and Radisson brands in EMEA and China respectively, but also promote people-to-people exchanges between China and the rest of the world. We very much look forward to making the most of the available potential together.”

The Radisson Blu Hotel, Frankfurt in Germany is the first hotel from Radisson Hotel Group’s portfolio of more than 1,100 hotels to become a co-branded hotel with Jin Jiang International. The choice of Frankfurt was an obvious one: for years Frankfurt has been the number one destination within Germany for Chinese tourists. The presence of the international airport ensures that many Chinese visitors start or end their trips in Frankfurt. And what’s more, no other region in Europe offers more direct flights to China – something that is particularly valued by Chinese investors. It also gives the hotel a chance to showcase the renovation project it completed recently, making now the ideal time to welcome Chinese-speaking guests.

At the newly co-branded hotel, Chinese-speaking guests and travelers will find a range of features designed and curated to provide them with an excellent experience and make them feel at home. New hotel offerings cover all the key moments of the stay, from collateral such as menus and welcome cards being available in Chinese to guests having the ability to pay for anything with Chinese Union pay cards. In the guest rooms, small touches like the provision of tea kettles and a choice of Chinese teas make a big difference. Guests can also relax while watching Chinese television channels or by reading Chinese newspapers, available via the Radisson Blu One Touch app.

The Radisson Blu Hotel, Frankfurt also features a range of new Food & Beverage options created for Chinese-speaking travelers. It has added traditional dishes like congee, noodles and wontons to the selection available as part of the daily breakfast service. There are now Chinese meals in the hotel’s restaurant, Welcome Corner and on its room service menus – including Shanghai noodles, Hainanese chicken rice and Singapore Laksa. Guests can also enjoy a special welcome ceremony upon check-in.

As part of preparation for co-branded hotel opening, a talent exchange program was rolled out earlier this year. A team of employees – featuring chefs, reservation managers and others – from Radisson Hotel Group’s hotels and corporate offices spent three months in Shanghai with the aim of providing a true Chinese experience in European hotels. In return, a Chinese team is spending time in Europe to gain a greater understanding of European hospitality.

To facilitate the booking process for Chinese-speaking travelers, as of 30 June 2019, 53 Radisson Hotel Group properties will be featured on the WeHotel Platform, Jin Jiang International’s global hotel booking platform. The remaining properties will be available by the end of the year as well. As part of this collaboration, Radisson Rewards and WeHotel Prime, Jin Jiang’s high-end hotels loyalty program, are working together to provide localized, in-hotel benefits to members of both programs.