Aircraft utilisation by Japanese airlines has not yet recovered to pre-Covid levels, in line with global utilisation trends. However, the Japanese aviation market is robust and well-placed for growth opportunities in the Asia-Pacific region in coming years.

As with many countries around the world, the global pandemic has severely impacted all aspects of the Japanese aviation market. As a consequence, almost 20% of the Japanese fleet still remains either parked or stored, as illustrated below with IBA’s InsightIQ Fleet data. Notably, this has improved markedly in recent months. The majority of the parked aircraft are widebodies, with the Boeing 777-200ER (12) and Boeing 777-200 (11) recording the highest numbers. In terms of stored aircraft, the Airbus A320-200 is the highest with 16. 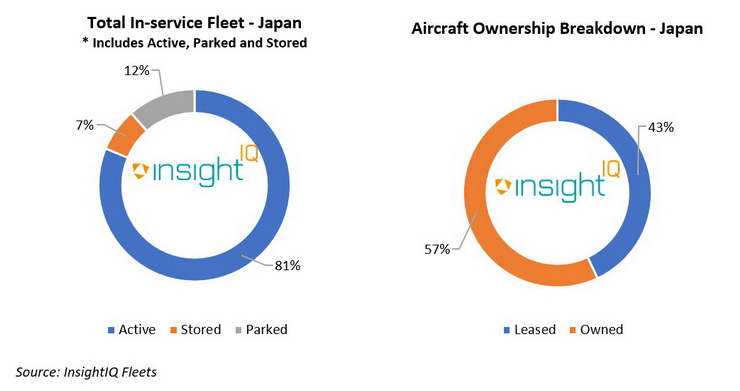 Demand for JOL and JOLCO Financing

From an aircraft finance perspective, the Japanese market is often characterised by the Japanese Operating Lease with Call Option (JOLCO) and Japanese Operating Lease (JOL). JOLCO transactions have declined in volume over the last year as the aviation industry has been adversely affected. Aircraft demand and trading volumes are down, which subsequently translates into less demand for tax solutions. However, as demand for new aircraft grows post-pandemic as well as the return of the Boeing 737 MAX programme, airlines and Japanese tax investors will likely increasingly seek out JOL and JOLCO financing.

Note: the data illustrated in these graphs does not include Special Purpose Vehicles or Companies and considers aircraft owned by only entities based in Japan.
The geographical distribution chart refers to aircraft owned by Japanese lessors currently on-lease to operators. The top ten aircraft models only consider the top ten most populous aircraft models owned by Japanese lessors and currently on-lease to operators. 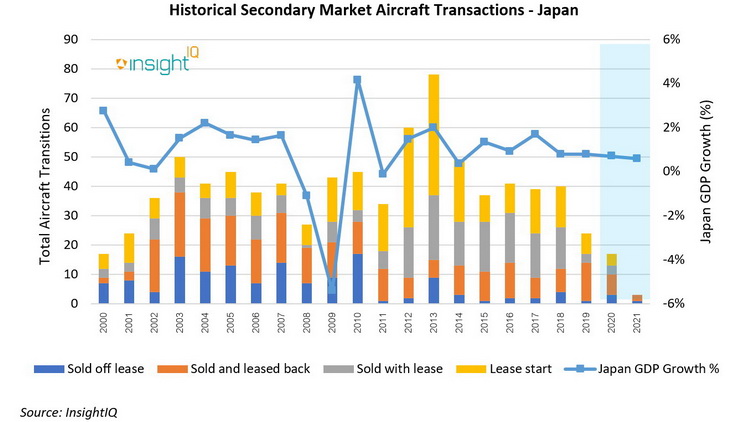 The graph above discounts transactions made by airlines to Special Purpose Vehicles/ Company’s, i.e ANA Airways to ANA Holdings. As well as this, with sold off lease and sold with lease transactions, the buyers are Japan based operators, with lease start and sale and leaseback transactions, this in reference to the operator involved and when domiciled in Japan. 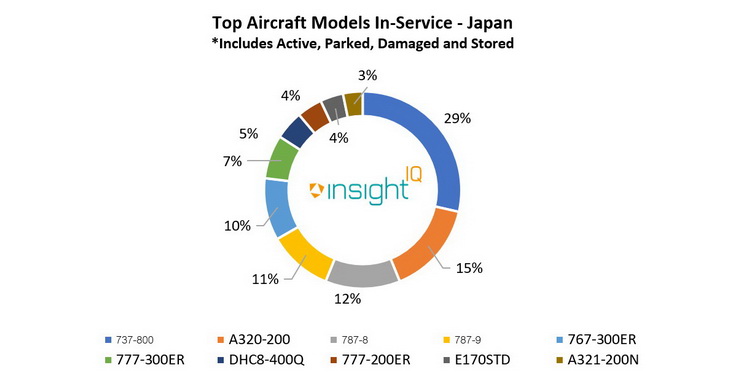 Looking to the graph above, Japan’s aviation market and indeed the rest of the world have not reached a point yet whereby aircraft utilization is returning to Pre-Covid levels. As of March 2021, travel restrictions remain in place for foreign nationalities visiting Japan for tourism, with flights only currently allowed for Japanese citizens and permanent residents. As a result, international and domestic traffic as seen above is still clearly being affected. Despite this, in the long-term, IBA believes Japan’s aviation market and industry as whole is robust and is well-placed for growth opportunities in the Asia-Pacific region in the coming years.

All data used and displayed in this article is derived from IBA’s proprietary data platform, IBA InsightIQ. Lewis joined IBA in 2018 as an Aviation Analyst within the Valuations team. In this role, he is responsible for aircraft appraisals, market studies, consultancy, research and publications. Lewis is responsible for IBA's commercial aircraft appraisals; including widebody, narrowbody, regional jet and turboprop aircraft. His specialities include forecasting, modelling, market research and technical due diligence. Lewis also acts as writer for various industry publications. Lewis graduated from the University of Hertfordshire in 2016 with a 1st in Bachelor of Science (BSc) Honours Degree in Aerospace Engineering with Management. Following this, Lewis completed a Master's of Science (MSc) Honours Degree in Air Transport Management at Cranfield University.