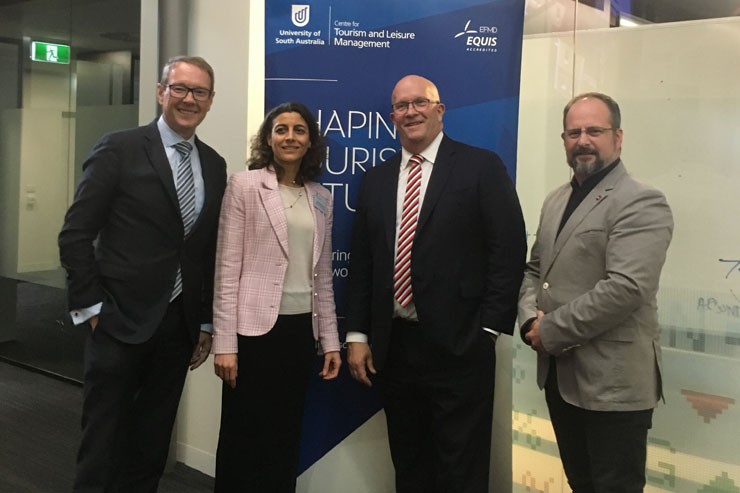 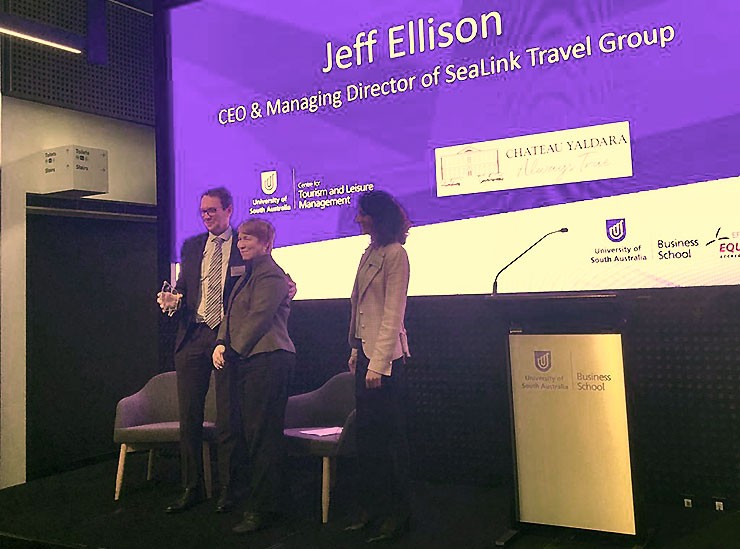 Thursday 22nd of November was a great day for tourism celebrations in Adelaide. The Centre for Tourism & Leisure Management (CTLM, University of South Australia) organised an end-of-the year event to celebrate the CTLM’s 2018 achievements and Jeff Ellison’s (SeaLink CEO) contributions to the SA tourism economy. The tourism industry event was also honoured with a welcome speech by the Minister for Trade, Tourism and Investment, Hon David Ridgway, followed by an interview with Sealink CEO, Jeff Ellison.

Professor Marianna Sigala, Director of CTLM, kicked off the event by providing an overview of the 2018 CTLM’s key achievements and research projects, as well as revealing the CTLM’s strategic plan and activities for 2019. CTLM has been growing from strength to strength during the last 3 years becoming a major contributing and active tourism player within the SA tourism ecosystem. “… tourism is a multi-dimensional phenomenon, and CTLM has expanded in scope and scale to address this. The CTLM membership now features researchers and scholars across various schools of UniSA representing expertise in several disciplines including management, marketing, economics, psychology-sociology, arts and culture, creative industries, built environment, information technology.” Professor Sigala also continued by naming various research projects that the CTLM has succeeded to secure and/or implement during 2018. Research projects address various tourism issues (including foodservice, information technology, impacts of events and culture, sustainable tourism, wellness tourism, food and wine tourism) and contribute high quality research findings, market intelligence and practical implications to the tourism economy. In 2018, the CTLM has successfully implemented four tourism industry and research events, which have totally attracted more than 500+ participants. CTLM has collaborated with major tourism industry and academic associations such as the New Wines of Greece, SATIC, IFITT, and CAUTHE. In 2018, the CTLM and SATIC have further deepen their collaboration by developing the UniSA-SATIC Research Scheme aiming to co-fund tourism research. The scheme attracted a great interest from tourism stakeholders, and eventually two projects were materialised and are currently being implemented: a project aiming to untap latent tourism demand for increasing visitation in the Limestone Coast (in cooperation with the Limestone Coast regional council); and a project aiming to identify strategies and practices for diverting tourism traffic from Flinders Rangers to nearby destinations (in cooperation with the Southern Flinders Rangers regional council). CTLM and UniSA have several schemes for supporting co-funded research with the tourism industry, and Prof Sigala has encouraged and urged the participants to further explore such opportunities with the CTLM members.

Professor Marie Wilson (Pro Vice Chancellor Business & Law, University of South Australia) also warmly welcomed the event’s participants. In her talk, Professor Wilson commented on the great achievements and recognitions of the UniSA Business School but also its hospitality and tourism programme. For example, in the 2018 Global Ranking of Academic Subjects (GRAS), the Shanghai Ranking’s Academic Ranking of World Universities (ARWU) ranked the Hospitality and Tourism Management programme of UniSA 25th in the world and 4th in Australia.  Being the University of Enterprise, Prof Wilson also corroborated the UniSA’s commitment to partner and contribute to the industry.

Hon. David Ridgway MLC (Minister for Trade, Tourism and Investment, South Australia, SA) gave an inspiring and positive talk about the potential of tourism in South Australia. Despite the technology automations, tourism remains a human dominated sector generating numerous jobs and entrepreneurial opportunities. In his talk, Hon Ridgway also emphasised the importance and further potential of tourism in SA: the great achievements of the state to meet its target on attracting more Chinese tourists is to be congratulated. However, Hon Ridgway stressed that to maintain the tourism growth and excellence, SA would need to develop, upskill and maintain its human skills and capital.

SeaLink is a SA-based group — currently employing more than 1600 staff nationally and operating
in NSW, Queensland, Northern Territory, WA and SA with a fleet of 77 vessels and 60 coaches. During the last years, SeaLink has vertically expanded in the tourism industry by acquiring and managing accommodation such as the Fraser Island resort. Diversifying into resort-style accommodation services is the future strategy of SeaLink. Mr Ellison, who has driven the expansion of SeaLink for the past 27 years, was awarded a Lifetime Achievement Award by the CTLM for his contribution to the tourism industry. In his interview with Prof Sigala, Mr Ellison stressed that one of the key success factors of SeaLink is its highly committed and skilled staff. Mr Ellison also talked about the commitment of SeaLink to work with and contribute to the local communities in order to ensure and provide a sustainable tourism development and future. Mr Ellison and SeaLink do not see the company as a simple transport or tourism operator, but also as a destination developer and ambassador of numerous Australian destinations promoting and connecting their landmarks and places with the world.

The event concluded with a presentation by Anthony Grundel (GM of 1847 Wines, Chateau Yaldara). The company is a world-wide famous winery based in SA, that has also recently diversified within the tourism sector by providing a holistic tourism experience and services including accommodation, function spaces, events and high class foodservice.  Chateau Yaldara has kindly sponsored the wines of the event that everyone enjoyed and highly appreciated. In his talk, Mr Grundel emphasised the need to support and expand the tourism growth in SA by attracting and keeping high quality staff. Mr Grundel also recommended that if local staff is not sufficient, then professionals need to be open minded (e.g. employ the backpackers and benefit from their international and multi-cultural understanding and skills,… who can also later become great ambassadors of the destination in their homeland). It seems that talent management and development has been anonymously identified by all the speakers as the key issue and factor that can sustain and further grow the tourism economy in SA. To that end, it is envisioned that the UniSA and CTLM will play a major role in the SA tourism ecosystem during the next years.

The event brought together some of the brightest thinkers and stakeholders in the tourism industry and offered numerous formal and informal opportunities to discuss the future of Australian tourism and network with key forward-thinking industry players and tourism researchers.