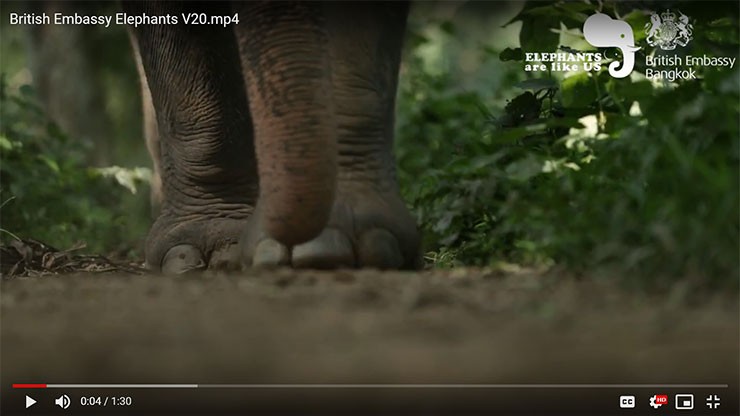 The British Embassy of Thailand’s ‘Elephants Are Like Us’ campaign a huge success.

BANGKOK, Thailand -- The ‘Elephants Are Like Us’ campaign initiated by the British Embassy of Thailand has come to an end. The campaign which ran from the 28th of January to the 13th of March aimed to raise awareness of the elephant ivory trade in Thailand, and the illegal wildlife trade in general. Shortlisted entrants’ pictures were posted on the British Embassy’s official Facebook page and put to a public vote from 9 March to midday on 12 March 2019. The lucky winners were announced on 13 March 2019, Thai Elephant Day.  The campaign received overwhelming support from the general public, social media personalities, and big-name celebrities, making it a massive success.

As part of the campaign the British Embassy of Thailand invited social media users to enter a contest. Entrants could compete for prizes by posting photos of themselves with elephants that showed the similarities in elephant and human behaviour. Competition winners received stunning gold-plated ceramic elephants from Elephant Parade Land. The statues were signed by the British Ambassador and celebrities such as Mint Aratchporn Chaladol, News Anchor at Thairath TV.

Campaign booths publicising the plight of Thailand’s elephants were set up in Sripatum and Chulalongkorn universities Bangkok. The booths provided students with information on the illegal elephant ivory trade, and what they could do to help. Campaign T-shirts were given away to those students who posted support of the campaign to their social media pages using the hashtags #elephantsarelikeus and @UKinThailand. A poignant video which featured Lamyai, Chopper, and Pimjai, three rescue elephants from Kanchanaburi, was viewed by over 37.8K people in less than 24 hours. The response to the ‘Elephants Are Like Us’ campaign was incredibly heart-warming, brought much needed attention to a critical issue, and highlighted just how much Thai people care about nature.

Mr. Brian Davidson, British Ambassador to Thailand said, “While the road ahead holds more challenges, the British Embassy feels it’s important to take a moment to thank all those that participated in our drive. The ‘Elephants Are Like Us campaign’ was a proactive way to effect change in the anti-poaching movement and prioritise the lives of elephants. We used social media platforms as a megaphone to inform the public of this pressing global issue. An issue that is endangering the lives of these precious and majestic creatures. We’re proud to be leading the way in Thailand in the fight against the illegal wildlife trade, particularly the illegal trade in elephant ivory. We can’t thank those who backed our campaign enough, and we hope they’ll do so again in the future”.

The UK has taken a leading role in the fight against the illegal wildlife trade (IWT), putting into law a complete ban of the sale of ivory last year. The British Embassy in Bangkok wish to further highlight the plight of Thai elephants and combat the grim and illegal trade of elephant ivory. The ‘Elephants Are Like Us’ campaign is a proactive step towards increasing public awareness in the hopes of eradicating usage, ownership and trade of ivory products once and for all.

The United Nations Office on Drugs and Crime (UNODC), places a conservative estimate value of $2.5bn in illegal profits annually for the illegal wildlife trade in the East Asia and Pacific region. The British government and the British Embassy in Bangkok, continue to raise awareness of the issue by funding projects that defend against IWT and lobbying other governments to do the same.