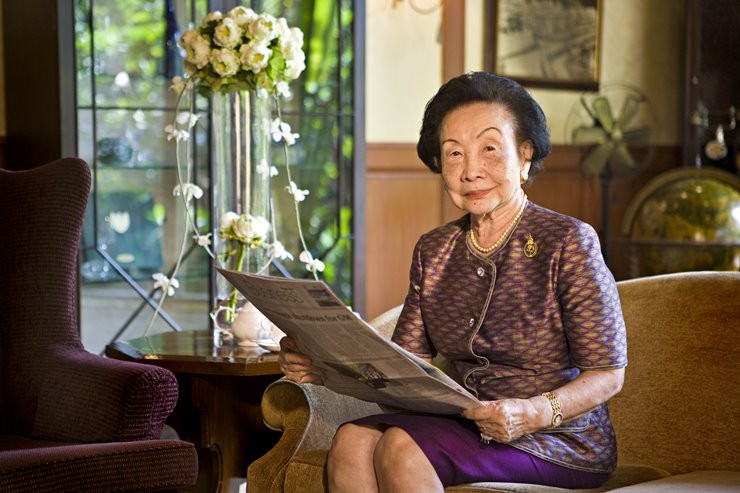 SHTM’s annual awards are designed to honour outstanding personalities who have contributed substantially to the development of hospitality and tourism in Hong Kong, the region and around the world.

Ranked among the top 3 “Hospitality and Leisure Management” institutions globally in the QS World University Rankings by Subject in 2017 and 2018, the SHTM is a symbol of excellence in the field.

Established in 2016, SHTM’s annual awards are designed to honour outstanding personalities who have contributed substantially to the development of hospitality and tourism in Hong Kong, the region and around the world. This year, the recipient was selected in accordance with the theme ‘Celebration of Women in Leadership.’

Thanpuying Chanut established Dusit International in 1948 and opened her first property in Bangkok, Princess Hotel, in 1949. It was one of the first properties in the city to feature a swimming pool, an elevator, and air conditioning.

Determined to open a five-star hotel offering luxury hospitality with a distinctively Thai touch, in 1970 she achieved this aim with the opening of the flagship Dusit Thani Bangkok – then the city’s tallest, grandest building – which has been a true icon ever since.

Building on the success of this property, Thanpuying Chanut opened more five-star hotels in major tourism destinations in Thailand and overseas, and branched out into hotel and culinary education with the Dusit Thani College in 1993, and Le Cordon Bleu Dusit Culinary School, a joint venture with Le Cordon Bleu, in 2007.

For her efforts in hospitality and related education, on 5 May 2000 His Majesty King Bhumibol Adulyadej of Thailand conferred upon Ms Piyaoui the highest royal decoration for a civilian: Knight Grand Commander (Second Class, Higher Grade) of the Most Illustrious Order of Chula Chom Klao. And with this, the right to bear the title “Thanpuying,” the equivalent of “Dame.”

The SHTM Lifetime Achievement Award was presented to Thanpuying Chanut, now 97 years old, in Bangkok in February 2018. A ceremony was held in her honour at Hotel ICON in Hong Kong on 22 June 2018, where she was represented by her son, Mr Chanin Donavanik, Vice Chairman and Chairman of the Executive Committee, Dusit International.

“Throughout her life my mother has worked tirelessly, and unselfishly, to promote and develop Thailand’s tourism industry overall, and she is delighted and honoured to be recognised with this prestigious award,” said Mr Donavanik. “Since opening her first hotel 70 years ago, my mother has always believed in Asia’s potential to become the epicenter of the tourism and travel industry, and she is delighted that, in the SHTM, we have a kindred spirit in Hong Kong which not only shares these sentiments, but whose dedication to developing young talent mirrors our own values and efforts in Southeast Asia.”

Mr Chan Tze-ching, Chairman of the PolyU Council, said, “Our awardee, Thanpuying Chanut, is a legend and pioneer in her industry. Her exemplary accomplishments have not only played an important role in raising the level of the regional and global hospitality business but also helped transform it through a distinctively Asian focus.

“Throughout the years, she has contributed generously to charitable causes and royal projects, in both personal and professional capacities. Thanpuying Chanut provides a truly inspirational role model, demonstrating to practitioners around the world what can be achieved with foresight, tenacity, and a giving heart, while being an especially significant figure to women in this region.”