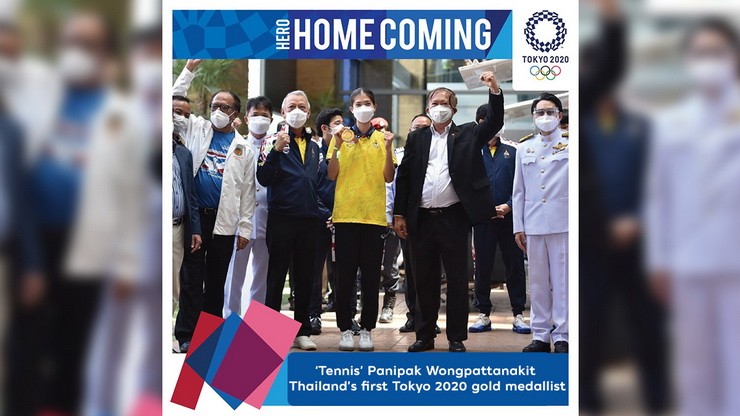 Panipak Wongpattanakit and the taekwondo team’s arrival in Phuket a boon for the recently reopened destination for fully vaccinated international travellers.

Ms. Panipak gave Thailand its first gold medal at the Tokyo 2020 Olympic Games – and the country’s first-ever gold in taekwondo – when she won the 49 kg class on Saturday.

The Surat Thani native, nicknamed ‘Tennis’, along with the rest of the Thai taekwondo team arrived in Phuket on Singapore Airlines flight SQ726 early this morning. They were accompanied by a high-level entourage of tourism and sports officials, including H.E. Mr. Phiphat Ratchakitprakarn, Minister of Tourism and Sports, and Mr. Thanatit Raktabutr, Secretary General of the Taekwondo Association of Thailand.

Their arrival in Phuket marked the importance of the destination in the gradual reopening of Thailand to tourism.

As per the ‘Sandbox’ requirements for entering Phuket, the returning taekwondo team and accompanying officials were to undergo COVID-19 testing upon arrival and are scheduled to spend 14 nights at the Novotel Phuket City Phokeethra Hotel. Their second and third tests are required on Day 6-7 and 12-13, respectively, and if given negative test results, they will be allowed to continue their journey to other Thai destinations.

Singapore Airlines is among a number of international airlines that have been flying direct to Phuket on a weekly basis since the Phuket Sandbox programme was launched on 1 July, 2021, signalling the reopening of the world-famous destination to tourism. Japan and Singapore are both on the approved list of countries/territories from where fully vaccinated tourists can travel to Phuket and Thailand.