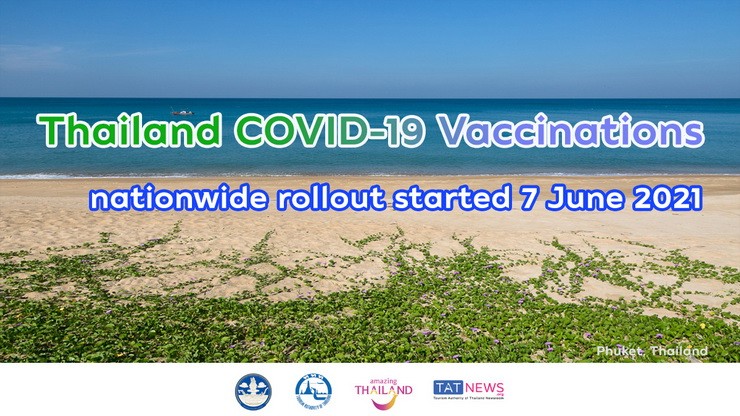 As the country is preparing to reopen to fully vaccinated foreign travellers from 1 July, 2021, starting with Phuket under the ‘Sandbox’ model.

Thailand started the mass vaccination rollout on June 7th, as planned, at a total of 986 vaccination centres across the nation as the Royal Thai Government plans to vaccinate 50 million people, or about 70% of the entire population, by the end of this year to build herd immunity against the COVID-19 disease.

According to Dr. Opas Karnkawinpong, Director-General of the Department of Disease Control, Ministry of Public Health, today’s number of nationwide vaccinations as of 12.00 Hrs. reached 143,116 people, including 73,273 of people over 60 years of age, 21,924 of people with seven underlying diseases, and 12,081 medical personnel and health volunteers.

The central vaccination centre at the Bang Sue Grand Station in Bangkok is expected to administer vaccines to some 10,000 people today, Dr. Opas said. The centre was opened on 24 May, and up until 4 June, has already administered vaccines to 155,028 people.

According to Mr. Natapanu Nopakun, Deputy Spokesman for the Ministry of Foreign Affairs, Thailand is expected to administer a total of 10 million doses of vaccines to the people within the month of June.

Thailand is preparing to reopen to fully vaccinated foreign travellers from July 1st, 2021, starting with Phuket under the ‘Sandbox’ model. Pending Cabinet approval, Phuket will reopen to fully vaccinated foreign travellers under the conditions that they stay in Phuket for no less than 14 nights in an accommodation establishment that is certified with the Amazing Thailand Safety and Health Administration (SHA) Plus certification. More details on the Phuket Sandbox will be provided as soon as officially approved directives are available.

The TAT Newsroom (www.tatnews.org) will continue to provide regular updates on Phuket’s preparations to safely reopen to foreign tourists ranging from entry requirements and public health procedures to local vaccinations and hygiene standards.