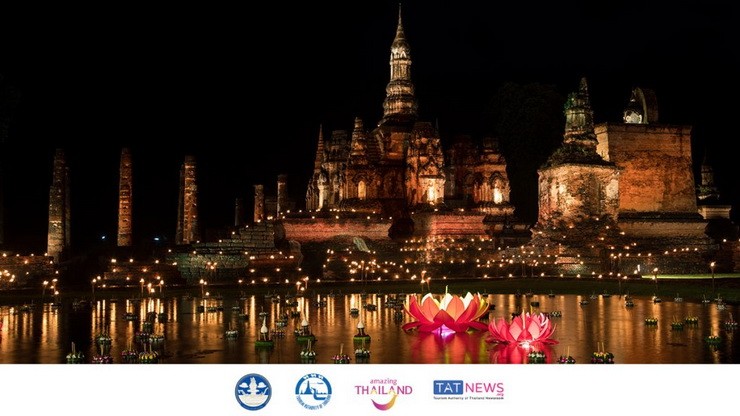 This year celebrations may be somewhat affected by pandemic control and prevention measures.

Bangkok, Thailand – The Tourism Authority of Thailand (TAT) is highlighting multiple Loi Krathong Festival 2021 celebrations in unique locations up and down the country to celebrate one of Thailand’s oldest and most colourful traditions.

The traditional festival of Loi Krathong – also known as the ‘Festival of Lights’ and the floating lantern festival – is one of the most charming and visually stunning of all Thailand’s annual festivals, and is celebrated during the full moon of the 12th month of the Thai lunar calendar.

This year the Loi Krathong Festival will be held on Friday, 19 November.

All around Thailand, people gather in the evening at lakes, rivers, canals, and beaches to participate in Loi Krathong and pay respect to the goddess of water. In Thai, the word Loi means ‘float’ and Krathong means ‘container, boat or vessel’, and the Festival entails the floating of a krathong decorated with candles and flowers onto the water. The Thais believe this is a way to rid oneself of bad luck and negative feelings, and to bring good luck and positive feelings.

Celebrated in Northern Thailand in conjunction with Loi Krathong is the Yi Peng Festival, which sees illuminated lanterns released into the night-time sky. During Loi Krathong, the magical sight of hundreds of candle-lit krathongs floating on the water is an enchanting sight to behold, as is the equally beautiful scene during Yi Peng of the lanterns rising upward. However, sky lanterns are normally banned during certain hours at night for passenger flight safety reasons.

While Loi Krathong is celebrated nationwide, some of the best places for tourists to experience the Festival are Bangkok, Chiang Mai, and Sukhothai. Once the first capital of Siam and today a World Heritage Site, Sukhothai offers the chance to enjoy Loi Krathong with the backdrop of majestic ancient ruins and is said to be where the Festival began some 600 years ago.

Here are some of the unique locations to celebrate the Loi Krathong Festival 2021.

Kindly note that this year, Loi Krathong celebrations may be somewhat affected by pandemic control and prevention measures; for example, in audience size limits and other social distancing requirements.