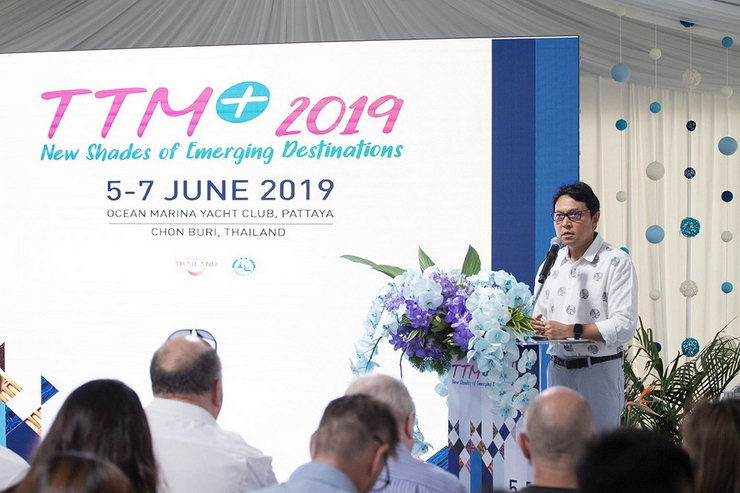 This year’s TTM+ 2019 is being held under the theme of ‘New Shades of Emerging Destinations’, a continuation of long-standing TAT efforts to promote emerging destinations, create jobs and distribute revenue countrywide sustainability.

Speaking at the Thailand media briefing at the Thailand Travel Mart Plus (TTM+) 2019, Mr. Tanes Petsuwan, TAT Deputy Governor for Marketing Communications, said that this year’s TTM+ 2019 is being held under the theme of ‘New Shades of Emerging Destinations’, a continuation of long-standing TAT efforts to promote emerging destinations, create jobs and distribute revenue countrywide sustainability.

He said Thailand is now offering a choice of 55 emerging destinations to visitors seeking exciting new experiences in both international and domestic markets. In 2018, these destinations recorded 6 million (6,223,183) trips by foreign tourists, a growth of +4.95 percent over the last year.

Mr. Tanes said the entire concept of positioning Thailand as a ‘Preferred Destination’ is designed around the concept of offering quality products and services to travellers through Unique Local Experiences while balancing quantity versus quality, and marketing versus management.

As the briefing is held on the World Environmental Day, the Deputy Governor added “Accordingly, responsible tourism is what we will emphasise from now on to achieve that goal. The key will be to manage those numbers and inculcate a higher level of environmental consciousness across the entire industry.”

In line with that policy and concept, the A-B-C strategy has been adopted to ensure both clarity and simplicity:

A – Additional: Linking major and emerging cities: Connect major destinations to nearby emerging cites. For example, in the North, tourists can travel by car within an hour to Lamphun and Lampang from Chiang Mai. Likewise, on the Eastern Searboard, Pattaya can be linked to Chanthaburi and Trat in the East.

B – Brand New: Promoting new potential emerging cities: Some popular destinations can be individually promoted thanks to their strong identity and positioning. For example, Buri Ram in the Northeast has a rich Khmer heritage and is also becoming a regional hub for domestic and global sports events since the opening of the Chang Arena and Chang International Circuit.

C – Combined: Combining emerging cities together: Some emerging cities can be promoted in combination due to their proximity, shared histories and civilisations. For example, Sukhothai with Phitsanulok and Kamphaeng Phet would make an outstanding historical route while Nakhon Si Thammarat and Phatthalung are grouped for enriched Southern civilisation.

Mr. Tanes said some of these emerging cities are already seeing arrivals of international tourists in the past few years as follows:

He said this year’s TTM Plus would go a long way towards putting these destinations on the global map.