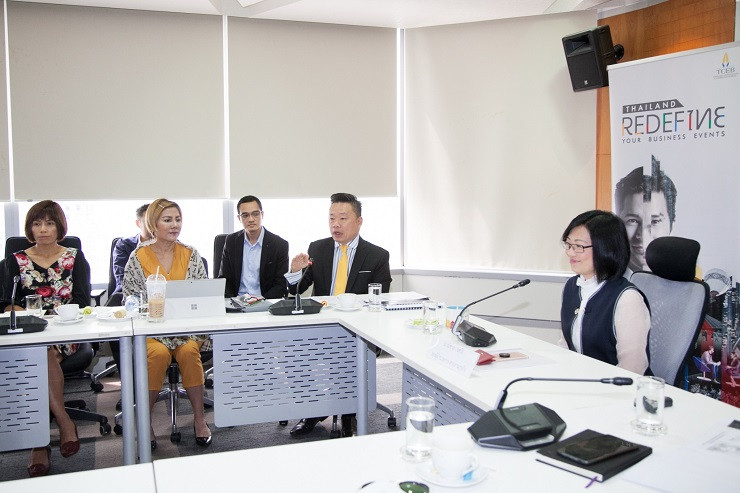 All projects are initiated with the objectives to help realise Thailand’s economic corridors in various regions that are linked with the GMS countries and the CLMV bloc as well as to strengthen linkage with China’s One Belt One Road initiative.

Bangkok, Thailand – The Thailand Convention and Exhibition Bureau (TCEB) is implementing four economic corridor projects, co-hosting and supporting conferences as a platform to enhance  trade and investment with the neighbouring countries in the Greater Mekong Sub-region (GMS), in line with the Thai Government’s economic policy to strengthen Thailand’s position as a regional hub.

All projects are initiated with the objectives to help realise Thailand’s economic corridors in various regions that are linked with the GMS countries and the CLMV (Cambodia, Lao PDR, Myanmar and Vietnam) bloc as well as to strengthen linkage with China’s One Belt One Road initiative.

Mrs. Nichapa Yoswee, TCEB's Senior Vice President – Business, said the four GMS economic corridor projects reflect TCEB’s role as a co-creator of business opportunities, under its ‘Thailand Redefine Your Business Events’ branding. It is also in alignment with the government’s policy to strengthen economic ties with neighbouring countries to become ‘Stronger Together” and make Thailand a regional hub. Apart from that the projects meet the objective of the government’s policy to promote regional cities as a destination.

"TCEB has a policy to use conference and trade show as a tool to drive economic growth and generate economic impacts. So far four conferences have been held in regional provinces located in the economic corridors that connect with GMS countries. Co-hosted and supported financially by TCEB, the conferences have gathered entrepreneurs from Thailand, CLMV and GMS to form networks and join table-top sessions for business exchange. The total value of business exchange between 2018 and 2019 is now standing at 307 million baht,” said Mrs. Nichapa.

The first conference is International Conference on Luang Prabang-Indochina-Mawlamyine Economic Corridor (LIMEC), which spans two cities in Lao PDR, five Thai provinces in the lower northern region, and three key cities in the south-eastern part of Myanmar. Run by the Provincial Chapters of the Federation of Thai Industries, Provincial Chamber of Commerce, Tourism Council of Thailand and co-hosted by TCEB, the conference has been held in Thailand for the fifth consecutive year since 2015, each one attracting between 400 to 500 delegates. TCEB’s involvement has contributed to 20 business exchanges in 2018 alone, totalling 226 million baht in such sectors as agriculture, food, construction, logistics, health and tourism.

Cambodia-Vietnam-Thailand Economic Corridor Cooperation Conference (CVTEC) was hosted in 2018 in Pattaya and 2019 in Rayong where MOU has now been signed between the three countries to open oceanic transportation route along the southern coast of Vietnam, Cambodia and eastern coast of Thailand in the four Thai provinces of Trat, Chanthaburi, Rayong and Chonburi. Run by the Thai Chamber of Commerce, Thailand-Cambodia Business Council and Tourism Council of Thailand and co-hosted by TCEB, the conference aims at promoting trade, tourism, logistics and business travel or MICE between the three countries. The trial operation of the oceanic transportation route will begin in 2020 when table top business sessions will be launched with TCEB support for the first time for CVTEC.

GMS Logistic Forum – The GMS Logistic Forum started in Bangkok in 2018 and the second edition in Khon Kaen in 2019. Both editions attracted around 450 delegates, mostly logistics operators from the six GMS countries. In 2019, table-top sessions were launched at the event, leading to 112 business matching with the total value of 12 million baht. Undertaken by GMS Freight Transport Association (FRETA), Mekong Institute, GMS-BC, Thai Federation of Industries (Khon Kaen Chapter) and co-hosted by TCEB, the event is the first GMS-level logistic conference and is complementing Khon Kaen’s potential as a logistic hub of the GMS region due to its current huge infrastructure investment.

GMS Thailand e-Commerce Economic Corridor (GTEC) – TCEB hosted this inaugural event in Chiang Rai in July this year to provide a platform to link Thai community entrepreneurs with Chinese e-commerce platform operator, resulting in placement order for Thai products worth 70 million baht.  TCEB’s aim is to drive GTEC as e-commerce economic corridor and plans to stage GTEC annually and rotate to all regions of Thailand, starting with the Northeast in 2020 and the southern region in 2021. GTEC is run by Thai-Chinese Strategic Research Centre, International College of Digital Innovation (Chiang Mai University), Ministry of Commerce Biz Club, Thai-Shenzhen Friendship Association.