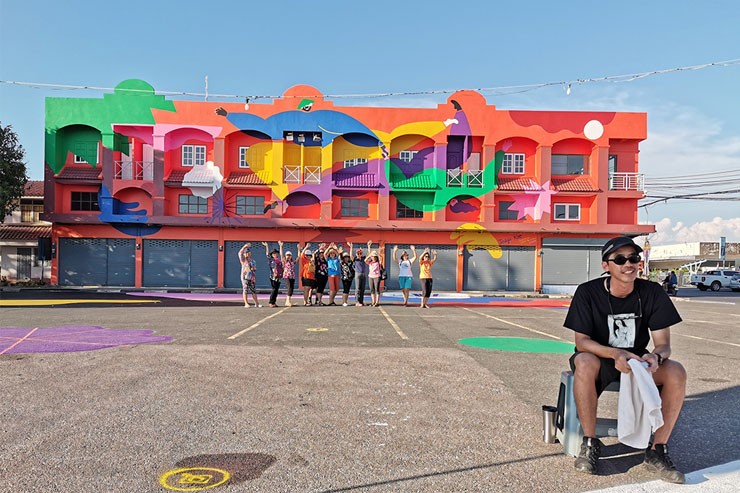 Three more ‘ASEAN Pop Culture’ events are also planned for Chiang Rai in Thailand, Mandalay in Myanmar and Battambang in Cambodia during May, June and July, this year.

Bangkok, Thailand - The Tourism Authority of Thailand (TAT) has announced the success of the second ‘ASEAN Pop Culture’ activity, which took place in April in Trat province in the Laem Ngop Lighthouse area.

At the ‘Experiencing Pop Culture’ event in Trat, spectacular street art was created on walls of old buildings at two locations in the Laem Ngop Lighthouse area.

Indonesian artist Andrew Suryono adorned the wall with street photography under the theme of ‘dancing together’.

Trat’s homegrown rapper band Run Trat and local school band Trat Buri, together with music artists DJ Muninn from Thailand and Alisson Shore from the Philippines brought another building to live with colourful paintings. They also created music that combined the sounds of nature with traditional Thai and modern music instruments.

During their time in Trat, all artists created their works in the format of workshops with the local community to rope in participation and interest from the locals, as well as to instil them to be a ‘good host’.

The ‘ASEAN Pop Culture’ project aims to promote connectivity between Thailand and its neighbouring countries in Southeast Asia. It is also to position Thailand as the hub of this kind of event to connect both Thai and foreign tourists.

The project involves events in cities in Thailand, Myanmar and Cambodia featuring famous Thai and ASEAN artists, who can use their popularity and social media networks to stimulate art and cultural activities in the focus areas.

Yuthasak Supasorn, TAT Governor said, “The ASEAN Pop Culture project promotes ASEAN tourism as well as secondary destinations and community tourism in Thailand. This is helping to direct tourism revenue to the communities involved, while also presenting these destinations to tourists in new ways like arts and crafts, music and local culture.”

Three more ‘ASEAN Pop Culture’ events are also planned for Chiang Rai in Thailand, Mandalay in Myanmar and Battambang in Cambodia during May, June and July, this year.