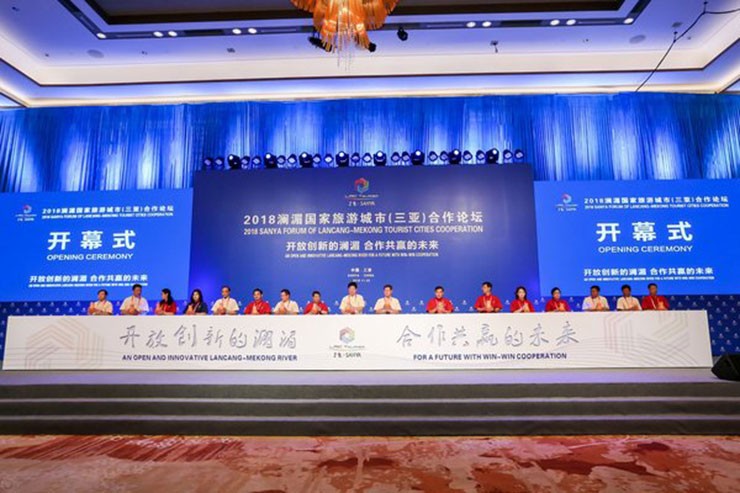 More than 200 guests including delegations from 18 cities in China, Cambodia, Laos, Myanmar, Thailand, and Vietnam, as well as foreign consular representatives and tourism industry specialists from countries along the Lancang-Mekong River participated in the forum.

SANYA, China -- Themed "An Open and Innovative Lancang-Mekong River for A Future with Win-Win Cooperation", the 2018 Sanya Forum of Lancang-Mekong River Tourist Cities Cooperation opened in Sanya, a seaside city in southern China's island province of Hainan, on November 23. Under the guidance of the Hainan Provincial Department of Tourism, Culture, Radio, Television, and Sports, the Hainan Provincial Department of Commerce, and the Hainan Provincial Foreign Affairs and Overseas Chinese Affairs Office, the forum was organized by the Sanya Municipal People's Government and co-organized by the Sanya Tourism Development Commission and the Sanya Foreign and Overseas Chinese Affairs Office. More than 200 guests including delegations from 18 cities in China, Cambodia, Laos, Myanmar, Thailand, and Vietnam, as well as foreign consular representatives and tourism industry specialists from countries along the Lancang-Mekong River participated in the forum.

Tong Daochi, Member of the Standing Committee of the CPC Hainan Provincial Committee and Secretary of the CPC Sanya Municipal Committee, said during the opening ceremony that Sanya has greatly benefited from cooperation with cities along the Lancang-Mekong River which involved the planning and implementation of new flight routes, tourism, cultural exchanges and bilateral trade in recent years. Sanya plans to discuss prospects and opportunities that will further deepen the cooperation with the cities via the forum with the aim of creating a platform for exchanges in culture, education, agriculture and tourism, he added.

Thailand's consul general in Guangzhou, Vasin Ruangprateepsaeng, who had attended two earlier editions of the event, said the forum is a constructive meeting resulting in enhanced cooperation between cities and countries along the Lancang-Mekong River. This year's event is especially important and timely, given the speed of the economic development and wider opening-up policies in both China and countries along the Lancang-Mekong River, as well as China's implementation of the One Belt, One Road initiative and Thailand's plans for the Eastern Economic Corridor and Thailand 4.0, all of which are certain to enhance the benefits that the countries will receive from the tourism cooperation, he added.

Soudaphone Khomthavong, Deputy Director of the Department of Information, Culture, and Tourism of Luang Prabang Province in Laos, said the forum has opened up great opportunities for cities along the Lancang-Mekong River and helped them enhance their strengths in the tourism sector. Luang Prabang has established partnerships involving tourism resources with China, in addition to Laos' favorable policies targeting Chinese tourists such as visa upon arrival. She said additional policies benefiting Chinese tourists will be released with the upcoming China- Laos Tourism Year in 2019.

The two-day event consisted of a round-table meeting, a Lancang-Mekong cities collaborative exhibition, and a series of breakout sessions on collaboration across the tourism sector. During the round-table meeting, the Lancang-Mekong tourist cities drafted a Memorandum of Understanding (MOU) on strengthening cooperation as it relates to tourism in seven key areas including establishing a mutual tourism communication mechanism; opening new air routes; opening new cruise routes; and engaging in additional collaborative projects.