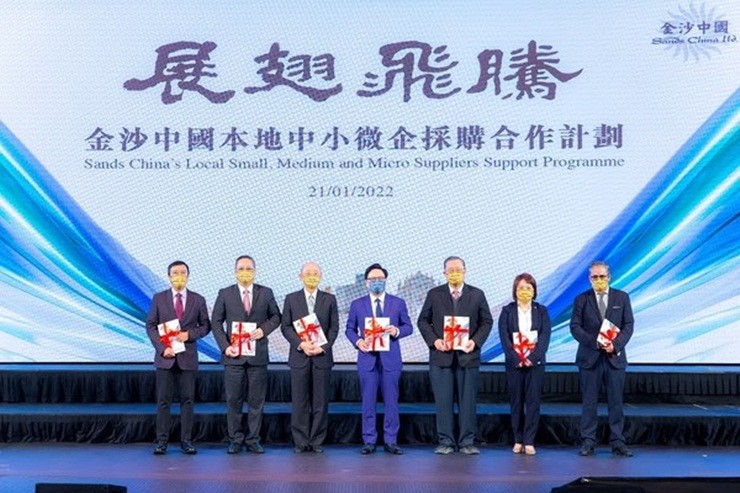 Sands China launched its SME book last Friday at The Londoner Macao, presenting the publication to guests of honour. The book not only records the milestones of the company’s SME support programme since 2015, but also highlights some of the success stories of local SMEs the company has worked with over the years. 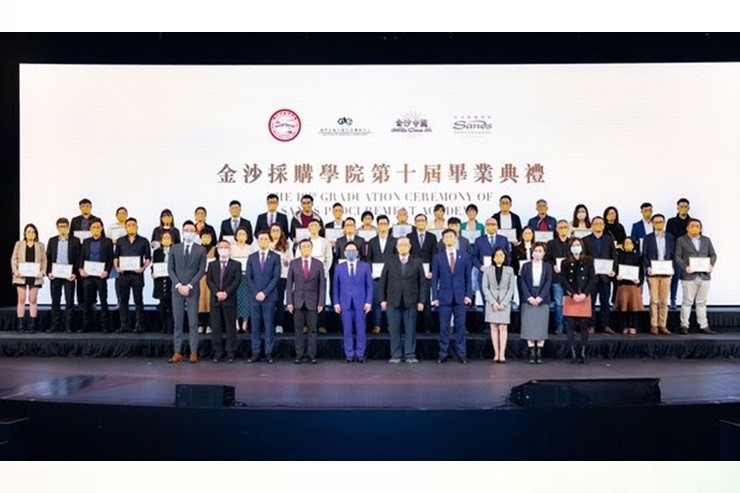 Graduates of the 10th intake attended the graduation ceremony of the Sands Procurement Academy last Friday at The Londoner Macao. The academy helps local SMEs gain experience and capacity for working with large-scale international corporations like Sands China by sharing business knowledge and skills to promote the development of their businesses. 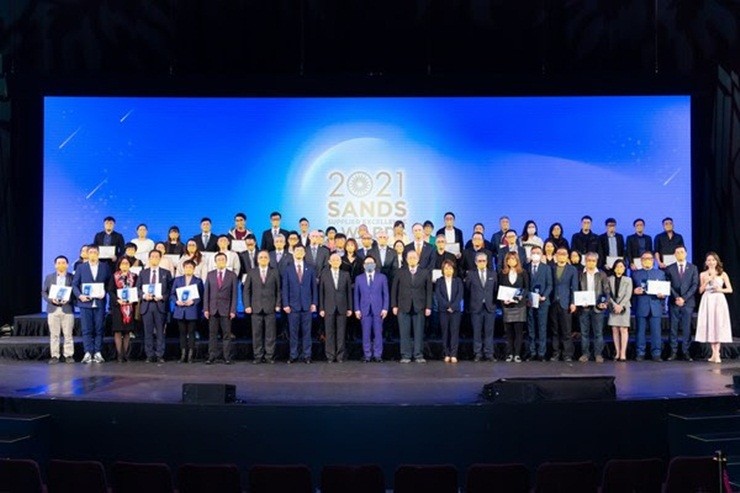 The 2021 Sands Supplier Excellence Awards, the 10th Sands Procurement Academy Graduation, and the new SME book are all among Sands China's ongoing efforts to support Macao's SMEs as part of the company's Local Small, Medium and Micro Suppliers Support Programme.

MACAO - Sands China Ltd. held a joint event Friday at The Londoner Macao, where the company honoured some of its most outstanding suppliers, recognised local SMEs graduating from its procurement training programme, and launched a book highlighting the success stories of its local SME suppliers.

The 2021 Sands Supplier Excellence Awards, the 10th Sands Procurement Academy Graduation, and the new SME book are all among Sands China's ongoing efforts to support Macao's SMEs as part of the company's Local Small, Medium and Micro Suppliers Support Programme.

Holding the ceremonies at one event provided a valuable opportunity for the academy's latest cohort of graduating SMEs to gain encouragement from watching Sands China award some of its most outstanding suppliers, including local SMEs. And in launching its latest SME book, Sands China has recorded the milestones of the company's local SME support programme since 2015 and highlighted some of the success stories of local SMEs it has worked with over the years.

"Sands China is very pleased to again recognise the outstanding services and products provided by our many suppliers, whose collaboration is essential for us to provide the world-class experience our integrated resorts are known for," said Dr. Wilfred Wong, president of Sands China Ltd. "As Macao continues to carry on in the face of an ongoing pandemic, we are grateful for the continued cooperation of our suppliers, whether small or large, local or international. We are also glad to see the continued success of our Sands Procurement Academy in helping nurture Macao's local suppliers with skills and knowledge, as we celebrate the 10th group of local enterprises to graduate from the programme."

It is Sands China's 9th year holding the Sands Supplier Excellence Awards, acknowledging the cooperation and services of some of the company's most noteworthy suppliers. This year's ceremony recognised nine winners across six categories:

And during the graduation ceremony for the Sands Procurement Academy, the company recognised 52 local SMEs, including 16 exhibitors from the 2021 Sands Shopping Carnival. Nearly 370 suppliers have enrolled in the academy since its founding in 2017, and 330 have graduated to dates, including Friday's group.

The Sands Procurement Academy is co-organised with the Macao Chamber of Commerce and the Macau Productivity and Technology Centre (CPTTM) and is a first-of-its-kind industry training. It delivers practical knowledge to local SME suppliers to help them gain experience and capacity for working with large-scale international corporations. It does so by sharing business knowledge and skills to promote the development of their businesses.

After initially targeting a few key categories of local suppliers, the academy has been open to all local SMEs in Macao since 2019 – giving a broader range of SMEs the opportunity to benefit from the skills and knowledge offered by the academy's professionals.

Guests of honour at Friday's event were Lok Po, member of the National People's Congress and Director of Macau Daily News; Shuen Ka Hung, Director-General of the Macau Productivity and Technology Transfer Center; Lau Kit Lon, Head of the Business Promotion Division of the Economic Activities Development Department of the Economic and Technological Development Bureau of the Government of the Macao Special Administrative Region; Angela Fong, Manager of Public Relations for the Macao Trade and Investment Promotion Institute; Ma Chi Ngai, President of the Board of Directors of the Macao Chamber of Commerce; Paulo Coutinho, Director and Editor-in-Chief of Macau Daily Times; Dr. Wong; various Sands China executives; and representatives of local suppliers.

Despite the pandemic's broad influence on Macao's economy and tourism, Sands China has continued forward with its large-scale projects and has kept its local procurement efforts uninterrupted. This focus on local SMEs is in line with the Macao government's initiative to "buy local" and demonstrates Sands China's commitment to supporting local enterprises as part of the company's corporate social responsibility efforts.