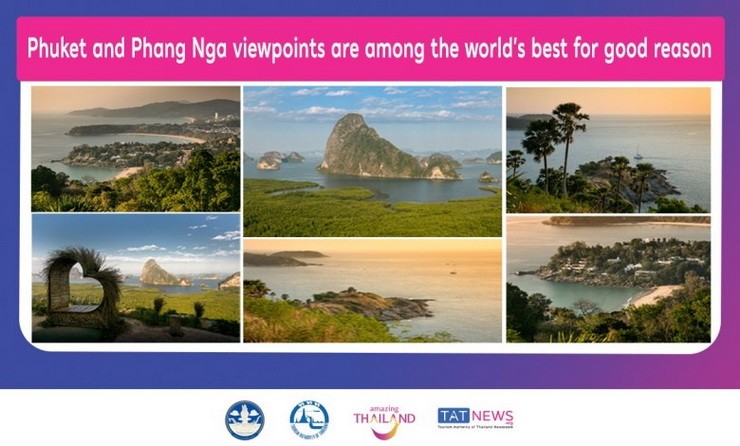 For spectacular sunsets and panoramic views of tropical paradise, these spots are where to go.

Bangkok, Thailand – The extensive coastlines, myriad of islands, and shimmering azure seas of Southern Thailand make for some of the most spectacular scenery in Asia, and within this tropical paradise are three equally spectacular viewpoints – Promthep Cape and Karon Viewpoint on Phuket, and Samet Nangshe in Phang Nga.

Located at the very southern end of Phuket between Nai Han and Rawai Beaches, Promthep Cape or Laem Promthep in Thai is undoubtably one of the most photographed locations on Phuket. And understandably so, as it offers uninterrupted views out across the Andaman Sea to the east and southeast with the added touch of swaying palm trees providing a delightful tropical touch to any photograph.

On a clear day, the distinctive shapes of Ko Phi Phi, Ko Racha Yai, and Ko Racha Noi can be seen from the outdoor terrace of the onsite lighthouse.

While Promthep Cape offers the chance for amazing views throughout the day, sunset is a particularly popular time to visit because, well, the sunsets are amazing.

A few minutes’ drive from Promthep Cape on the road to Nai Han Beach is Windmill Viewpoint, so named for the enormous white windmill perched on the hillside. From this spot can be enjoyed a bird’s-eye view of Ya Nui Beach on one side and the bay of Nai Han on the other.

Over the years, Windmill Viewpoint has come into its own fame as a photograph-taking spot, and is also now often used as a romantic background setting by local photographers to take pre-wedding pictures.

A few kilometres directly north of Promthep Cape, Karon Viewpoint is another of Phuket’s most visited spots. It is located just south of Kata Noi Beach on the hillside off the main coastal road and yields a fantastic view of three beaches along the island’s west coast, these being Kata Noi, Kata and Karon Beaches, and an interrupted gaze out to the beautiful Andaman Sea.

The viewpoint was previously known as Kata Viewpoint and in Thai is called Khao Sam Hat, meaning ‘The Hill of the Three Beaches’. The picturesque scene that stretches out from this vantage point represents much of what makes Phuket one of Asia’s most popular island destinations – sparkling blue sea, snow-white surf, white sandy beaches, and deep-green hillsides.

Like Promthep Cape, Karon Viewpoint is a photographer’s dream spot due to not only for the pure scenic beauty, but also the panoramic nature of the views on offer. And, also like Promthep Cape, it is a renowned spot from which to capture gorgeous sunset pictures.

Phang Nga, north of Phuket, is another region of outstanding natural beauty and one of the best places to admire this is at Samet Nangshe Viewpoint. It requires a drive of about 25 km from the bridge connecting Phuket to the mainland, but it is certainly worth it – both for the spectacular views the viewpoint affords once reached and the beautiful tropical countryside to be enjoyed along the way.

From Patong Beach on Phuket, the drive is just under 80 km and takes around two hours.

To say the view from Samet Nangshe Viewpoint is picturesque does not do it duty. The scene one beholds stretches out magnificently over the limestone islets of Phang Nga Bay. The view to the east is particularly striking at sunrise, out over a chain of islands to the left and right.

A wonderful attribute of this viewpoint is that both day and night it can deliver spectacular scenes for those who make the trip there. Because the location is far enough from significant civilisation to avoid light pollution, the evening sky is full of twinkling stars, and it is possible at times to see the Milky Way.

There is a small campsite and café at the location, and staying overnight is a popular choice for those wanting to snap pictures of the star-studded night-time sky.

Samet Nangshe Viewpoint was discovered by Thai professional photographer Theerasak Saksritawee, whose images from the hilltop outlook spread quickly among locals and expatriates. It is still relatively undiscovered by many tourists, but for those who know and who take the time to visit the location the rewards really are spectacular.

Due to the current COVID-19 outbreak, international travel is discouraged at the moment. However this article is meant to serve as an inspiration for future trips to Thailand once the pandemic has come to an end.