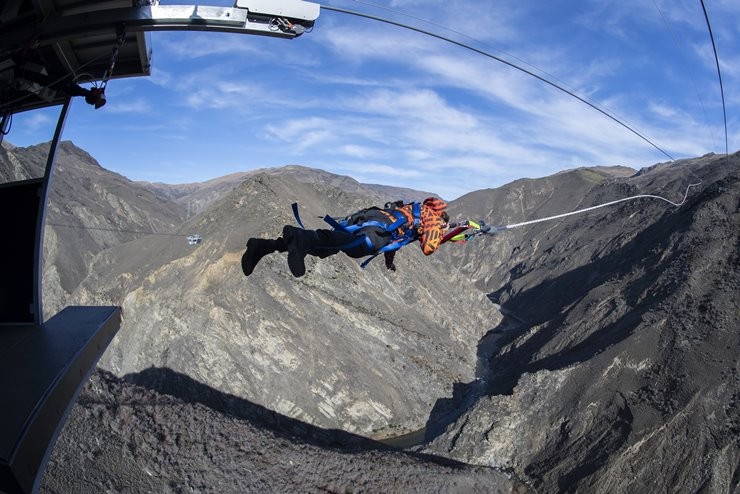 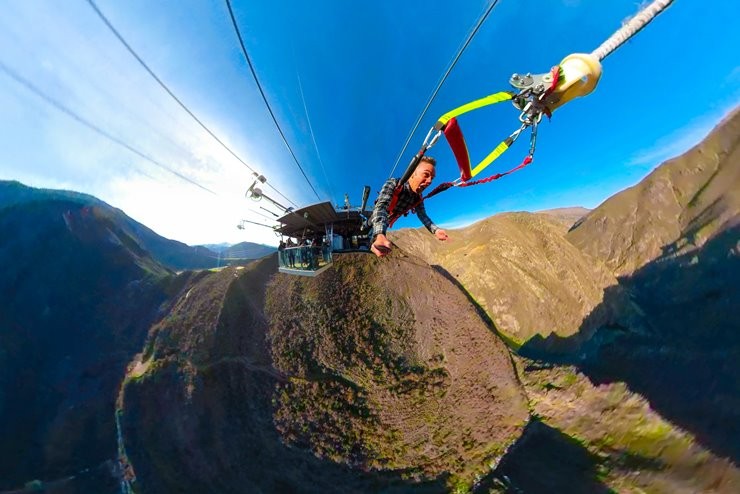 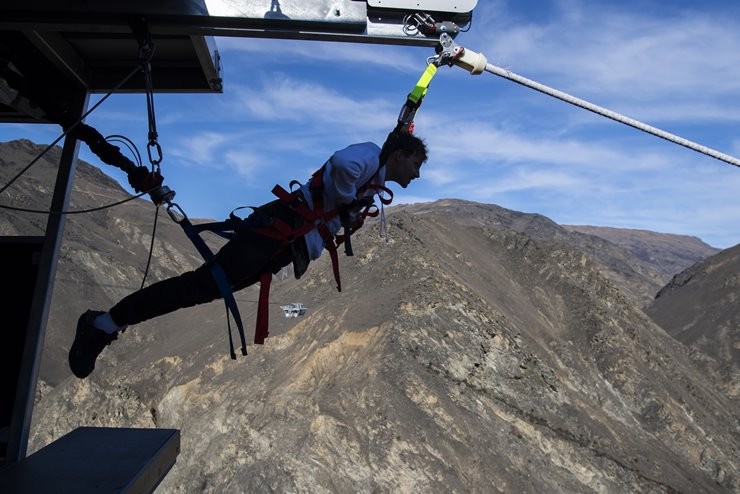 The official opening of this experience brings to fruition three decades of planning and development by Mr van Asch and the AJ Hackett Bungy New Zealand team.

The Catapult sees thrill seekers experience up to 3G of force and speeds of almost 100km per hour in 1.5 seconds, as they are propelled 150m out across a ravine before dropping suddenly towards the valley floor and experiencing a series of jaw-dropping bounces.

The official opening of this experience brings to fruition three decades of planning and development by Mr van Asch and the AJ Hackett Bungy New Zealand team.

“It’s hugely exciting to be here today, revealing the Catapult to the world, following years of playing around with the idea,” he says.

Mr van Asch officially opened the Catapult experience by being launched – quite literally – across the Nevis Valley at 9.30am (NZT) with special guests and media watching on.

“It’s a pretty unique feeling, surprising even. There’s nothing else quite like it,” he says.

Housed in a pod and between a series of cables, alongside the infamous Nevis Swing, the Catapult is a unique combination of height, flight and speed using a bespoke high-speed winch system developed over years of research.

Mr van Asch says he first came up with the idea when travelling around France during the 1980s with friend and (later) Bungy co-founder, AJ Hackett.

“I played around with the idea by riding my mountain bike with a Bungy cord attached, off bridges. It may have been legal,” he says.

“In 1988 we took Bungy to the world, and put New Zealand on the world adventure tourism map. Thirty years on it’s wonderful to still be pushing the boundaries globally.”

Specialist new technology for the multi-million-dollar Catapult was developed with the company’s research team before being built in an accredited testing facility in Christchurch and then brought to site for full scale installation, testing and commissioning. Testing has been conducted out-of-sight over the past nine months – beginning with weighted barrels, before moving on to a test dummy phase and finally human testing.

“AJ Hackett Bungy New Zealand is the epitome of the Kiwi entrepreneurial spirit and their investment in cutting edge technology and new thrills is an example of how New Zealand continues to be at the forefront of adventure tourism,” says Tourism New Zealand Chief Executive, Stephen England-Hall.

“Something like this could never have been accomplished without a combination of creativity, daring, sheer Kiwi craziness and of course investment in years of design engineering and testing.”

Mr England-Hall believes “the Nevis Catapult will inspire thrill seekers from all over the world to come to Queenstown to push their limits further than they have ever been able to.”

“The combination of speed, height and flight is something the world has never seen,” he says.

The world’s first commercial bungy jump operation was established near Queenstown at the Kawarau Bridge, the ‘original home of Bungy’ in 1988. The company – which now offers ziprides, swings, a bridge climb, tower walk and bungy experiences at five sites in Queenstown and Auckland – is set to reach one million jumps from the Kawarau Bridge Bungy Centre next month (September 2018).