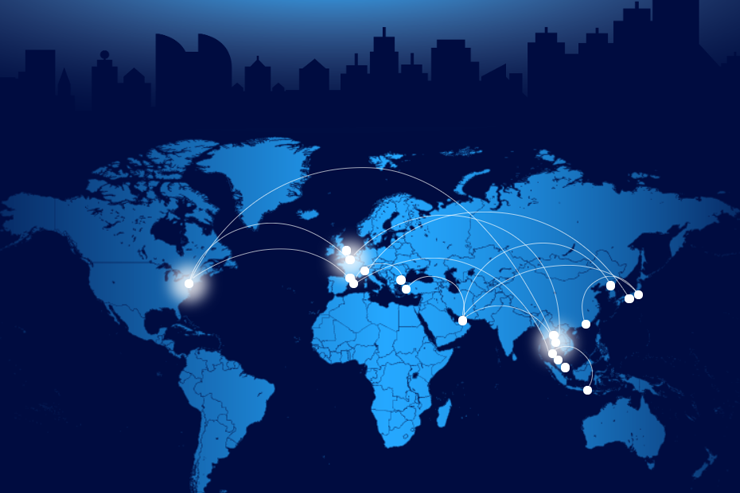 TravelSim has analysed the number of free wifi hotspots, average internet speed and the number of hotels and airports with free wifi, in the world’s most visited destinations to find the best and worst cities to stay connected whilst travelling.

Paris takes top place, leading the way with the highest number of wifi hotspots per km2 at 3,547, which is over triple that of Seoul in South Korea. The city also shows off 1,847 hotels and B&B’s that offer free wifi, giving you plenty of choice of where to stay. The average speed in Paris is 24mbps, which is double that of Kuala Lumpur, and just over the world average of 22.95 mbps according to the data. No wonder the city came out top in the connected city rankings with a score of 69! 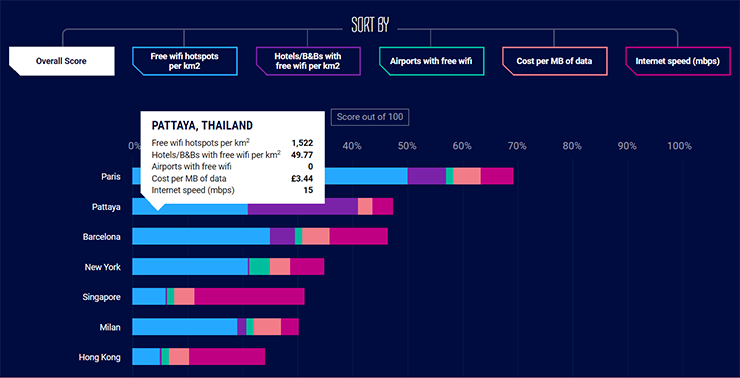 But what other cities are great for keeping you connected?

*overall score weight is out of 100

Which continent is the best for staying connected?

Europe comes out as the best continent to keep you connected overall, with Paris, Barcelona and Milan all featuring in the top 10 connected cities.

New York was the only city that came under the continent of North America, however, its results are seriously impressive, as it holds a whopping 1,166,093 wifi spots. The Big Apple falls just 369,844 wifi spots shorter than all the European city destinations analysed combined.

Interestingly, despite there being 13 countries from the data located in Asia, this continent came bottom for connectivity with an average score of 17.9. Asia alone has 2,620,520 free wifi hotspots, which is 1,084,583 more than Europe.

We’ve mentioned the world's best cities to keep you connected, but which ones need more work? Coming in last was Dubai, United Arab Emirates, which charged the highest price for one MB of data at £4.44 and having an average internet speed of just 8 mpbs. That’s twice as slow as the likes of London, three times slower than Paris, and over 10 times slower than Singapore.

Antalya and Istanbul in Turkey both scored low in the index, with Istanbul’s internet speed dropping to 7 mbps. Antalya, Turkey has the least number of free wifi hotspots with only 7,129 across the city, and only 5 per km2.

Helen Lauren, Head of Marketing and Online Sales, at TravelSim commented that “It’s become increasingly important to stay connected whilst travelling for both leisure and business and with this comes the demand for internet speeds to be as quick as possible. With 95 million photos posted daily on Instagram alone, daily habits like posting on social media are taken for granted when internet speeds are not a concern. We expect internet speeds to improve, not just in London, but around the world through the development of more secure networks.

As accessing the internet when abroad becomes a bigger priority for travellers, it is important that major cities across the world ensure it is easily available to use. With the rise of people using mobile data abroad, due to its convenience and security benefits, the cost of 1MB is becoming an important factor for travellers when considering their next destination.

London is both a tourist and business hub for people across the globe, making it critical to be a well connected destination for visitors. Ranking 11th, London needs to continue looking at its European neighbours to improve its connectivity. Cities such as Paris, Barcelona and Milan, all rank higher in the results.”