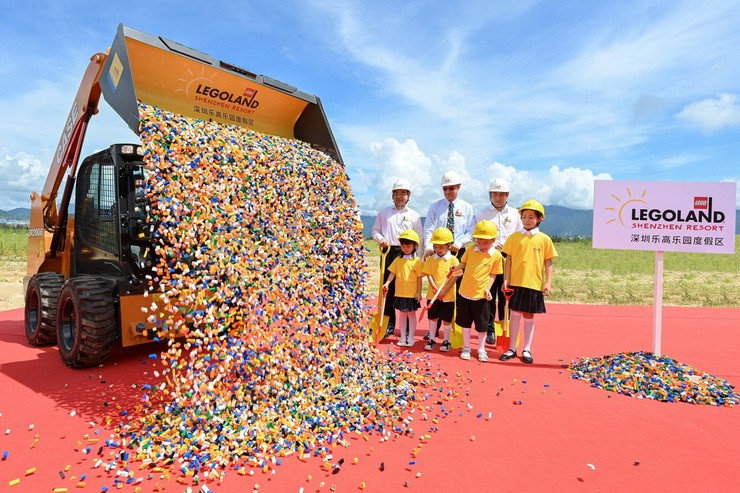 Located on the Dapeng Peninsula, on the eastern edge of Shenzhen, the LEGOLAND Shenzhen Resort will be the first international IP-based family entertainment theme park resort in the Greater Bay Area.

Located on the Dapeng Peninsula, on the eastern edge of Shenzhen, the LEGOLAND Shenzhen Resort will be the first international IP-based family entertainment theme park resort in the Greater Bay Area, covering approximately 580,000 square meters and exclusively operated by Merlin Entertainments, with Hazens Holdings as its local partner. The total project investment is expected to be over $1.08 billion (7 billion RMB) and the park is due to open in 2024.

Nick Varney, Chief Executive of Merlin Entertainments, commented: "Construction of the world's largest LEGOLAND Resort in Shenzhen marks a significant milestone for Merlin in China, reflecting the scale of opportunity in the country and our commitment to developing our business in China. This forms part of Merlin's broader strategy, alongside developing exciting attractions in partnership with some of the world's most popular brands.

The Shenzhen LEGOLAND Resort will be a must-see destination for millions of families looking to experience the magic of LEGO in China. We have already had great success with our immersive LEGOLAND attractions around the world and look forward to working with our partners to make the Shenzhen resort a reality."

The LEGOLAND Shenzhen Resort will be the ultimate LEGO theme park and hotel destination for children aged 2-12 and their families, catering for visitors looking for multi-day breaks and offering more than nine themed areas, as well as over 100 interactive rides, shows and attractions. The resort will also include the largest LEGOLAND Water Park and three LEGOLAND themed hotels, with over 1,000 LEGO themed rooms.

Speaking at the event, Mr. Siegfried Boerst, General Manager of the LEGOLAND Shenzhen Resort, added: "While maintaining the authentic LEGOLAND experience, there will be innovative designs, new themed areas, rides and immersive shows launched for the China market.

The LEGOLAND Shenzhen Resort will integrate the history, culture and ecology of Shenzhen and China. The park will also be a smart park, celebrating technological innovation, imagination and creativity in Shenzhen.

The Resort will include a combination of indoor and outdoor play areas to account for the climate in Shenzhen. MINILAND, one of the core areas of all LEGOLAND Parks, will be indoors to create a large, themed area with high-tech digital interactive experiences while paying tribute to the beauty of Shenzhen and China through representative landmarks, cultural and everyday life scenes. In echoing local characteristics, we have also developed a live show exclusively for Chinese families, and the Resort will feature the world's largest LEGOLAND® theatre with more than 1,000 seats.

Playful learning is a unique feature of all LEGOLAND Parks with educational interactive offerings such as creative robot workshops, the Driving School and the Rescue Academy which will all feature at the Shenzhen resort."

Jorgen Vig Knudstorp, Executive Chairman of the LEGO Group, said: "The LEGO brand has emotionally bonded with Chinese families during the past decades and contributed to creating a positive impact on the development of the Chinese society with learning through play experiences. KIRKBI and the LEGO brand are excited to bring LEGOLAND Resort to Shenzhen this time, and we are looking forward to offering even more creative and imaginative experiences to Chinese families, to inspire and develop the builders of tomorrow."

Yuan Fu'er, Chairman of Hazens Holdings, said: "Hazens Holdings began life in the Shenzhen Special Economic Zone, and after over 20 years, we have grown into a full-scale commercial property developer, with presence in industries such as cultural tourism and medical care. As the needs for family entertainment experience keeps growing, we're proud to be a key participant and pioneer in the market. We are honoured to collaborate with Dapeng District, Merlin Entertainments and the LEGO Group to build the first international IP-based theme park in the Greater Bay Area, establishing a one-stop destination for family entertainment."

LEGOLAND Resorts are committed to sustainable development in all areas, including environmental protection, in line with the "ecological-based development strategy" of Dapeng New District.