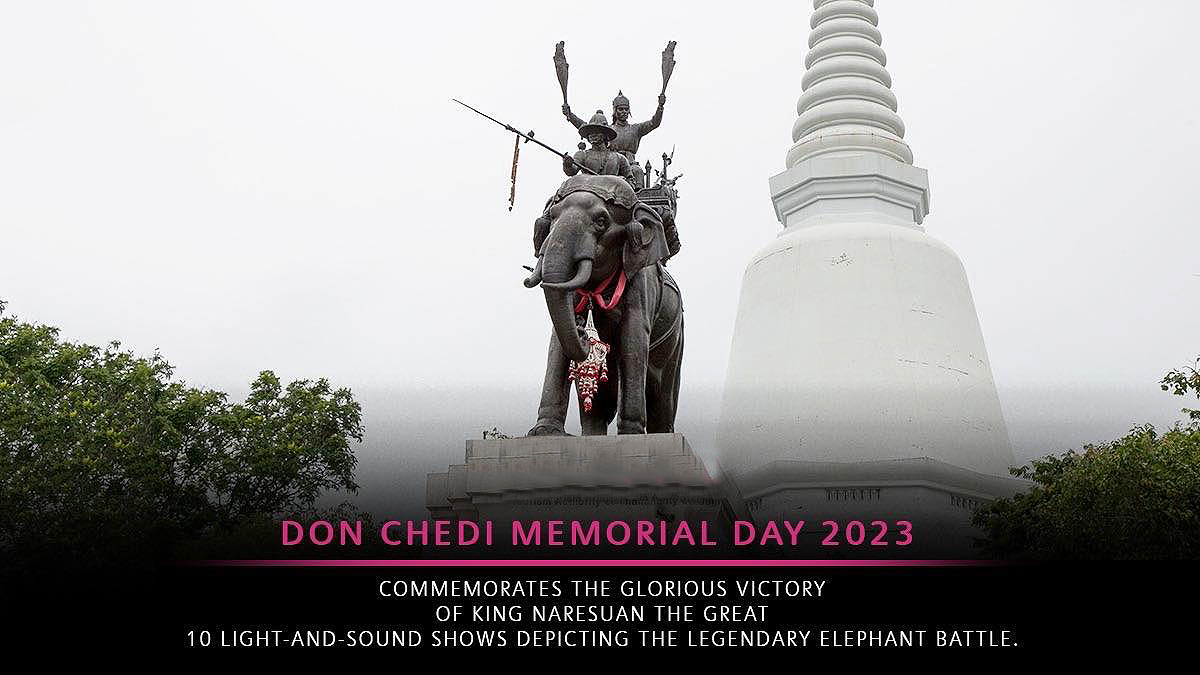 The legendary elephant battle led by King Naresuan the Great of Siam is depicted in the evening light-and-sound shows, with one showtime on 18-30 January (except 19 and 24-26 January) and 1 February.

The 15-day event is organised to commemorate the glorious victory of King Naresuan the Great helping then Siam regain its sovereignty and freeing itself from the occupiers. During the Ayutthaya Kingdom, Don Chedi was a historically important border town that was at the front lines of many conflicts. The legendary elephant battle took place in January 1592.

The Don Chedi Memorial event was first held 64 years ago in 1959, with the light-and-sound and multimedia mock-up war inaugurated in 1980.

The Don Chedi Monument comprises two sites: a royal monument in honour of the Siamese victory and a pagoda (Chedi) enshrining relics. The Royal Thai Army renovated the pagoda in 1952, by building a new 66-metre high and 36-metre wide structure over the ancient one. The statues of King Naresuan the Great and his elder sister Phra Suphankanlaya are also located in the compound.

Throughout the two-week long event, there are plenty of other interesting shows and activities, including cultural performances, Thai fabric fashion shows, Miss Don Chedi Beauty Pageant, Likay Thai folk theatre, and a host of music concerts by popular Thai singers and bands.

Suphan Buri is located only about 100 kilometres northwest of Bangkok. The province has a lot for visitors to see and do ranging from attractions, museums, historical ruins, reservoirs, and an aquarium to major temples.

Kuala Lumpur Convention Centre to welcome over 700,000 delegates in 2023