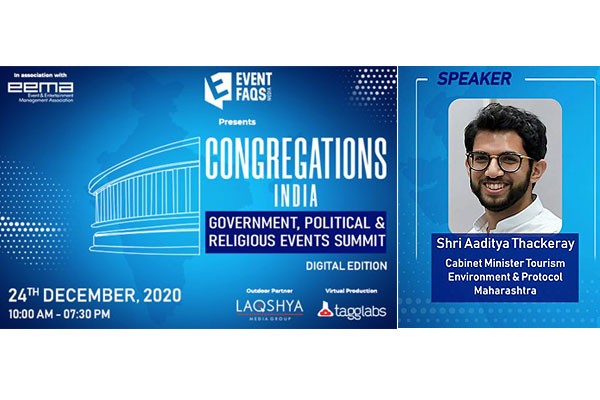 On the event industry front, Maharashtra Tourism is forming an events board

MUMBAI: “We wanted to build the hospitality industry as a core industry for the state. Likewise, with the event industry. Maharashtra has no dearth of talent and no dearth of audiences as well,” said Aaditya Thackeray, Minister for Tourism, Environment and Protocol, Government of Maharashtra, speaking at ‘CONGREGATIONS INDIA: Government, Political, Sport & Religious Events Summit’ organized on 24 December 2020.

The interaction that happened on the eve of Christmas 2020, became magical as Thackeray put on Santa’s hat and made commitments for development and growth of the event and hospitality industry on a war footing.

Aaditya Thackery announced: "On the event industry front, Maharashtra Tourism is forming an events board, talks for which have been on since early 2020."

The Minister committed sweeping policy changes for the event industry similar to what has been done for the hospitality industry. This would include revamp of the licensing to ensure ease of doing business and an Event Board to facilitate incentives for events and MICE as well as to attract global events to Maharashtra.

He said, “There are two things we will be doing in the coming few weeks. One, we will be forming an events board as a platform for everyone to have an interaction with the government, suggest ways to go ahead and how we can actually incentivize this industry, how do we re-build this industry, which has been adversely affected by the pandemic. The other is, we are going to have regular physical interactions, so that we can hear from you. Rather than me speaking, we want to hear your perspectives on what we can do better and what we can do right.”

Moderator Sabbas Joseph, co-Founder Director, Wizcraft International, immediately responded committing support and participation from the event industry and EEMA leadership to help the Minister pivot the changes on collaboration between government and industry, which the Minister welcomed.

Sharing what had been done for the allied hospitality industry, the Minister revealed that in the last three months, the number of licenses required by the hospitality sector had been reduced from 70 to 10, number of application forms from 70 to eight and from needing 15 NOCs, new establishments now only need nine self-certifications.

“We have given the status of ‘industry’ to the hospitality sector, which was long-pending – for almost 30 years. My age by now,” he quipped. “I do hope that working together we could make similar policy changes for the event industry too”, he confirmed.

Prodded about the Minister and the Tourism department under him being in a hurry, the Minister responded saying, “I am definitely in a hurry because every day is crucial, no day that is wasted comes by again. If you look at climate change or tourism, building on that each day is really important.”

Asked about the ‘Divine Maharashtra’ initiative with IRCTC, Thackeray noted that while the state of Maharashtra was home to shrines of all faiths that attracted lakhs of pilgrims, they had never been looked at formally, from a tourism perspective.

“When I say divine tourism, I am not talking about exploiting them or getting money or revenue out of them. What we are looking at is facilities for them to reach those places comfortably, for them to spend a night in that place, to have a good bed and breakfast there, so that they can pray to their hearts’ fullest. I think we’ve truly got to support these instruments of hope, that is prayer, to give comfort to the pilgrim who is walking on foot, driving in or flying in,” explained the Minister and this is irrespective of religion.

Besides which, there will be multiple ancillary facilities and businesses that will come up around these religious destinations making them sustainable, noted Thackeray, pointing to Shirdi, which has Maharashtra’s second busiest airport after Mumbai.

Responding to moderator Joseph’s point on promoting Maharashtra Tourism in the backdrop of budgetary cuts due to Covid19, Thackeray underlined that for the first time, a budget of Rs.1,200 crore had been allocated to the sector in March 2020. The government had subsequently announced a 67 percent reduction in development spends across the board due to the pandemic.

“Tourism had to cut spending, much like every other department except Health, Home and a couple of others”, noted Thackeray. “But Maharashtra Tourism seems to have thought things through when it comes to promoting itself as a destination”.

As the Minister put it, “Tourism is about two things. One is a thing to do (activity). And the other is a place of hospitality, be it a beach shack or a luxury resort. Between both of them is the vibe that we create. That’s where promotion comes in.”  He added that the tourism department must create that vibe – and leave businesses to take over from thereon.

“More than micro-managing, I want to make this department an enabler. It’s not our job to be micromanaging hotels or restaurants or going into creating tourist destinations. If you look at markets like the UK or New Zealand or many others, the tourism departments have been enablers for the individual citizens and businesses to demonstrate their talent and ability on a world scale. And to welcome people from the world over to their place,” explained Thackeray.

Bullish on Tourism Potential: I wanted the Tourism portfolio
At the very start of the session, the Minister noted that while Maharashtra was blessed with natural beauty and diversity, adventure destinations, pilgrim spots and many more tourist attractions, they had not been leveraged to potential.

“Why haven’t we used it yet for tourism in the state was the question I was carrying all these years,” he reflected.

On his experience of running the two portfolios (tourism and environment), Thackeray said they could be coming together at some points, running parallel in others, and in conflict with each other at times, too.

“Boating is great anywhere in the world. The flipside is, whether you have a motorable boat or a non-motorable boat. Take beach shacks, for example. Beach shack tourism is always going to grow multifold in a state like Maharashtra. Compared to Goa, the amount of opportunities we have in Maharashtra and are creating right now is truly insane. But while doing that, we have to look at the sea, turtle nesting places, migratory birds and whether there is discharge of any kind solid or liquid waste going into the sea, treated or not,” said the speaker.

Donning the hat of Environment Minister and climate change activist, Thackeray added, “This is not just about tourism. I talk about sustainability in two things. One is a sustainable model for the environment. The second is a sustainable model for the economy. How do we balance both is very crucial. Sustainability has to become a lifestyle. We don’t want to be living with a mask 24/7 for the rest of our lives. We want to breathe fresh air.”

#MissionBeginAgain
Asked about reopening of the tourism and event industries which have been badly impacted by the Covid19 pandemic and lockdown, the Minister emphasized the need for a cautious approach.

“Many states opened up in a hurry and had to close down most of the things they opened up. What we are trying to do with ‘Mission Begin Again’ is open up in a staggered, painfully slow and careful manner, but not close down on anything that we’ve opened up. Because opening up and closing down again would be more damaging to any industry,” noted Thackeray.

“I want events to happen in Maharashtra. I want MICE to grow. Be it music concerts, live events, live theatre, live shows, there are multiple things that EEMA can host. I want it to be a vibrant state, which is precisely why I brought in the 24/7 enabling act,” the Minister stated.

“So, we will open up. The thing is events like concerts cannot be held with just 50 people. And some of the performers – including politicians, who are performers – have to speak over video conferencing to reach larger audiences. But I am hoping we can get through this very soon,” surmised Thackeray.