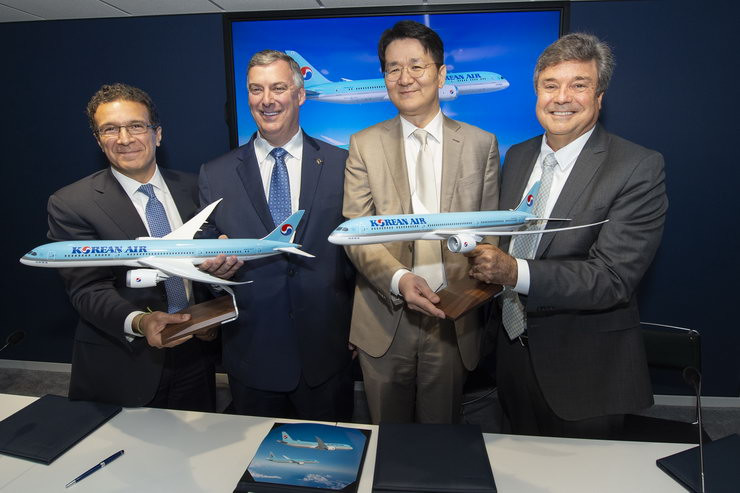 Hong Kong – Korean Air has announced that it will introduce 20 Boeing 787-10s, the largest member of the Dreamliner family, for the first time in Korea, and add 10 more 787-9s to its existing fleet.

The decision reflects Korean Air’s continuous effort to modernize the fleet, and the new 787 airplanes will replace its existing airplanes, such as A330s, B777s, and B747s.

The Boeing 787-10 is one of the newest aircraft in the aviation industry and only a few carriers currently have it in operation: Singapore Airlines, Etihad, United Airlines and All Nippon Airways. Upon the signing of the MOU, Korean Air will introduce the first 787-10 in 2021 and continue efforts to modernize its fleet, maintain its outstanding customer service, and ensure operational efficiency.

“As we continue to innovate our products, the 787 Dreamliner family will become the backbone of our mid- and long-haul fleet for many years to come,” said Walter Cho, Korean Air’s Chairman.

The Boeing 787 Dreamliner offers unrivalled comfort to passengers. While most airliners have cabin air pressure equivalent to that of an altitude of 8,000 feet, Boeing cut that down to 6,000 feet for the Dreamliner and increased the air pressure inside the cabin, improving the passenger experience. Passengers can also enjoy humidity which is 5% higher than other airplanes on average.

The Dreamliner also integrates advanced technologies and revolutionary design for outstanding performance. More than half of the airframe is made of carbon composite materials, which improves structural performance with less weight, increases fuel efficiency, and reduces gas emissions as well as noise during take-off and landing.

As a key Boeing partner, Korean Air also supplies core parts on Boeing’s 787program, such as the raked wing-tips — a critical part of the wing to reduce air resistance — and also the aft fuselage section of the airplane.