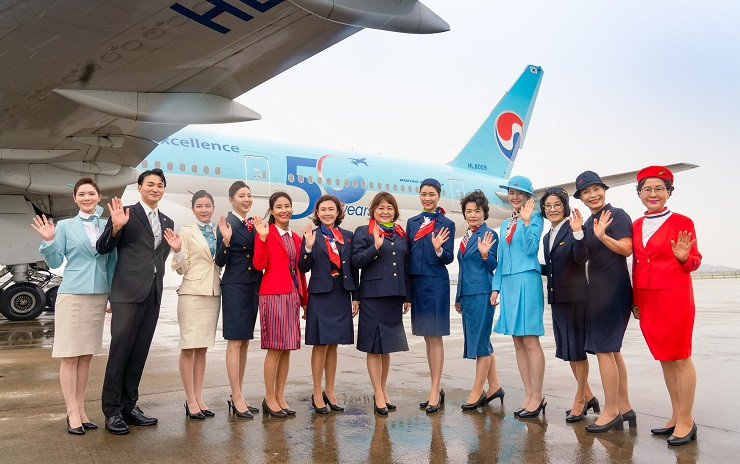 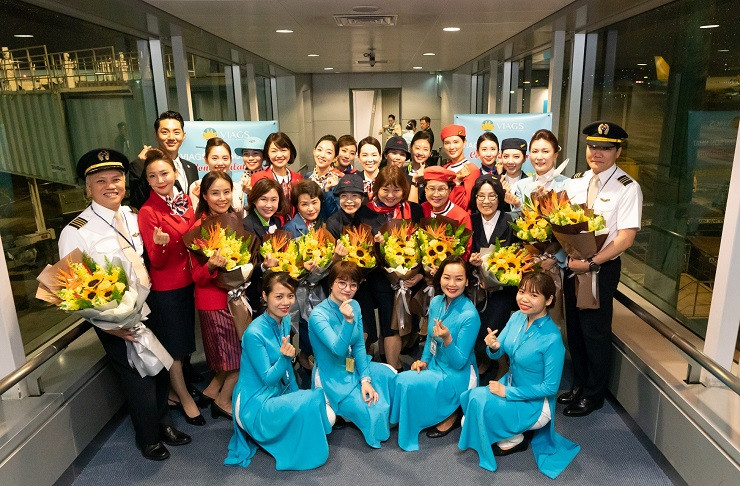 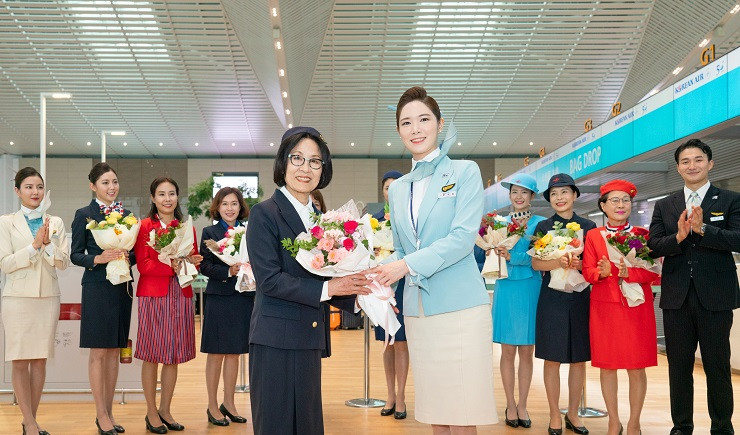 Korean Air held an event at Incheon Airport, during the flight, and at Ho Chi Minh Airport, to commemorate the airline’s first international flight and to thank its customers for their unwavering support over the past half a century.

Korean Air held an event at Incheon Airport, during the flight, and at Ho Chi Minh Airport, to commemorate the airline’s first international flight and to thank its customers for their unwavering support over the past half a century.

The airline gave out gifts and special cookies designed with a 50th anniversary emblem at the boarding gate.

Onboard the KE683 flight, Korean Air prepared a special video to showcase the Ho Chi Minh route 50 years ago. The video showed old news clips of Korean Air in 1969 opening a new route to Southeast Asia, demonstrating its leap to the global stage by upholding its missions of enhancing the national brand and pursuing private diplomacy in Southeast Asia.

The flight attendants wearing vintage uniforms walked down the aisle like a fashion show, entertaining passengers by showcasing the changes in uniforms in the past 50 years.

Korean Air used a promotional aircraft designed with the 50th anniversary emblem for its special flight. The aircraft livery depicts the number 50 with a plane flying over it alongside the slogan “Beyond 50 Years of Excellence”. The number 50 symbolizes Korean Air’s 50th anniversary and features a stylized taegeuk design. Taegeuk is the iconic symbol of the Korean flag.

Ms. Kim Tae-soon, 75, and six other former flight attendants, who attended the inaugural flight ceremony for the Seoul-Ho Chi Minh route in 1969, were back on a Korean Air flight after 50 years.

“I vividly remember flying on Southeast Asian routes, in an aircraft designed with the Korean national flag,” said Ms. Kim. “I feel great pride in the amazing growth that Korean Air has achieved over the past 50 years.”

Prior to boarding, the former flight attendants in vintage Korean Air uniforms took photos alongside the incumbent crew members in front of the aircraft, and were presented with the 50th anniversary badge and a bouquet of flowers. The former crew members also arranged an impromptu photo event with the passengers at the boarding gate and onboard the flight.

To celebrate the 50th anniversary of its foundation, Korean Air will operate more flights with crew members wearing vintage uniforms until November 6.

“The historical uniform teams” will wear ten types of vintage uniforms as well as the current uniform on a single flight, enabling passengers to enjoy Korean Air’s history.

“The historical uniform teams” will be on important routes from each region, such as LA, Tokyo, Beijing, Hong Kong, Singapore, Paris and Sydney. For domestic routes, the teams will be on Gimpo-Busan, Gimpo-Jeju routes.