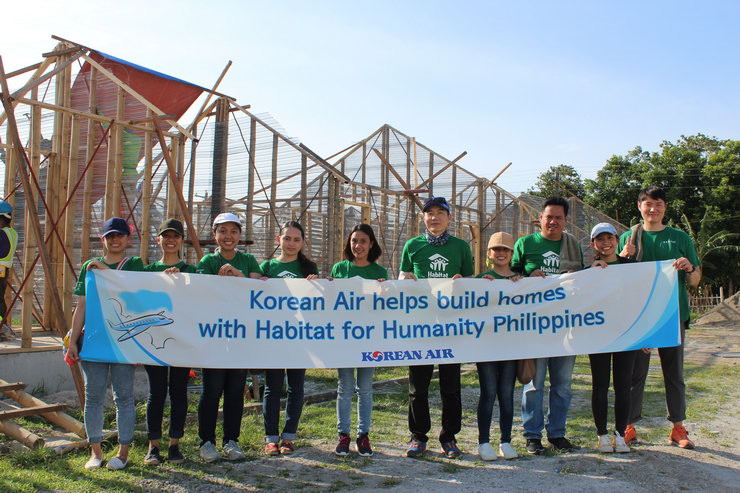 Since 2013, Korean Air has partnered with the Habitat for Humanity Philippines as part of the airline’s global corporate social responsibility (CSR) efforts.

Located in the central part of the Philippines, Negros Occidental is an area prone to frequent floods and earthquakes. Many local residents have lost their homes to these natural disasters, or have been evicted from privately-owned land, forcing them to relocate to temporary shelters.

A total of 10 employees from the Korean Air Manila office took part in construction work, carrying the materials, cementing and painting walls. On the project site, skilled construction workers educated locals on how to use the latest technologies to build and fix homes. Korean Air also donated funds and construction materials to build four housing units in Bohol, Philippines, with the Department of Social Welfare and Development of the Philippines matching the donated funds.

Korean Air has been actively fulfilling its corporate social responsibility across borders for many years; planting trees every year in Kubuqi desert in the Inner Mongolia region of China, and Baganuur, Mongolia, to fight desertification. The airline also delivers relief items to areas hit by floods and earthquakes, utilizing its extensive global network. As a leading global carrier, Korean Air will continuously fulfill its corporate social responsibility as part of the company's initiatives to give back to the society.