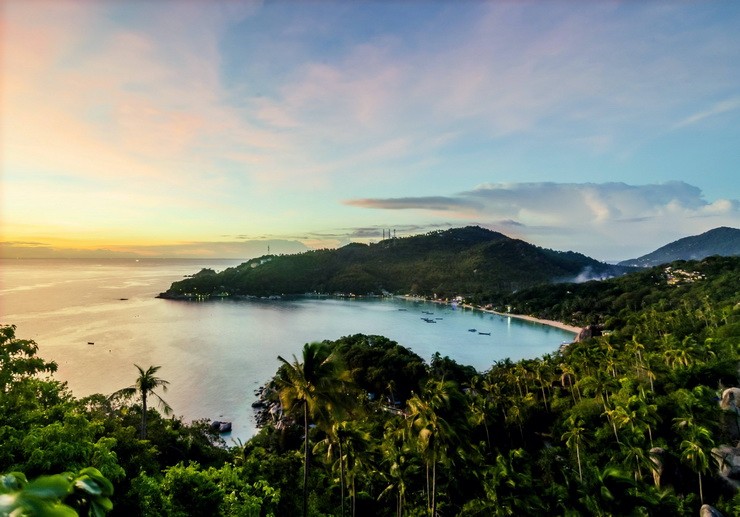 Despite the crisis, global hotel brand Kimpton are set to open on Koh Samui at the end of 2021, showing a vote of confidence in the island’s tourism prospects in the wake of the reopening (Photo courtesy Kimpton Hotels)

Bangkok, Thailand - It’s baby steps at the moment as Thailand’s Robinson Crusoe-inspired, island-focused international travel reopening plan is set to roll out in Koh Samui on 15th July.  Unlike the Phuket Sandbox program for vaccinated travellers, the Samui Plus sealed-route will test the water with a hybrid approach of three days in a hotel quarantine scenario and then allows visitor’s island-wide free access from the fourth day onwards.

In anticipation of overseas travellers flying to the idyllic holiday island in the Gulf of Thailand over 60 hotels have been certified in the SHA Plus safety and health program according to hospitality consulting group C9 Hotelworks’ research.  Gateway carrier Bangkok Airways has confirmed three domestic daily ‘sealed route’ flights from Bangkok’s Suvarnabhumi Airport starting in the middle of the month.  International Samui Plus visitors will be required to fly via Bangkok and transit on these designated flights.

Koh Samui’s island economy is heavily dependent on tourism with over 600 registered tourism establishments and nearly 24,000 rooms. The impact of the pandemic can best be highlighted when looking at the airlift, comparing pre-pandemic 2019 and the onset and ongoing impact of Covid-19 which saw airline passenger traffic drop 64% year-on-year. 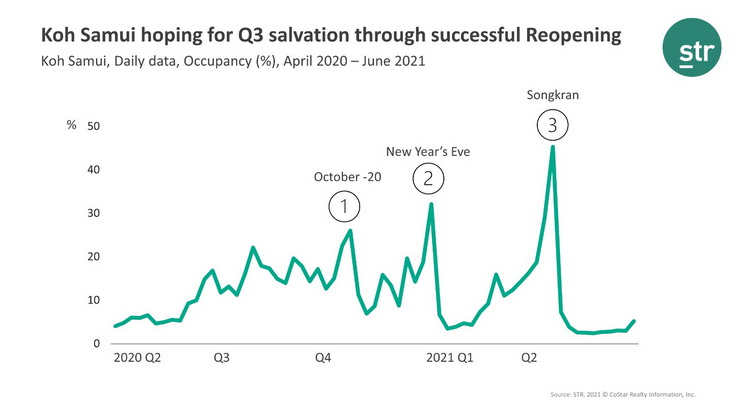 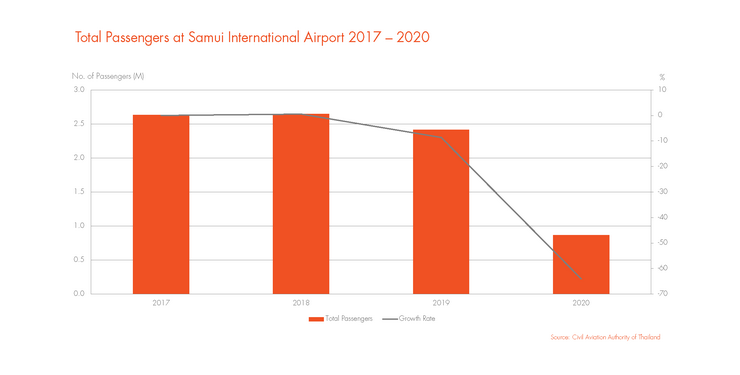 Speaking about the process of a gradual stepped programme for accepting overseas arrivals, C9 Hotelworks Managing Director Bill Barnett said “the learnings from the first week of the Phuket Sandbox will likely follow a similar pattern.  Over 2,300 international arrivals have come to the island with more than 140,000 confirmed hotel nights booked in SHA Plus hotels through August. Demand has remained strong and is now demonstrated, which bodes well for Koh Samui’s chances.”

He added “an ancillary impact of the Sandbox is the restoration of regularly scheduled direct flights between the two islands from 16th July starting with four flights a week this month and becoming daily in August. In analyzing tourism, we look to the sky for answers as the logical starting point, and this increased airlift is a key driver for the tourism economy.”

Moving to the outlook for the island’s lodging industry, C9 Hotelworks' new Koh Samui Hotel Market Update points out that the likely recovery journey will be top-down, with many travellers taking advantage of competitive rates in luxury and upscale tier hotels. C9 is forecasting the short to medium-term impact to be in rising demand at the expense of room rates as travellers tend to historically trade up in post-crisis travel.

As Covid-19 has landed the tourism industry in unknown territory, leading global data group STR’s Area Director for Asia Pacific Jesper Palmqvist weighed in with “since Q2 in 2020 when the crisis started, we have seen three hotel peak periods in Koh Samui, where levels reached beyond the bare minimum - Mid-October 2020 for the long weekend, New Year's Eve, and most recently the Songkran holiday where occupancies reached close to 50%.  These spikes in demand came from the domestic market and once the international factor comes into play, more stability will evolve.”

While Thailand’s tourism fortunes remain highly focused on islands, C9’s Bill Barnett is quick to say “it’s important to remember that Koh Samui and Phuket remain only small pieces of a bigger puzzle and that even Robinson Crusoe had to eventually get onto a raft and return to the larger world at hand. Until the entire country gets better, the sandbox remains a relatively small stage.”