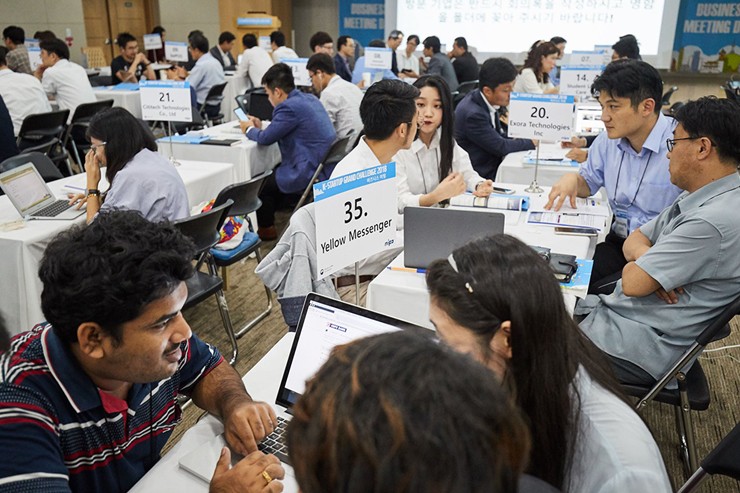 Back for its 4th edition, startups participating in the challenge will get opportunity to work with some of the world’s top tech companies such as Samsung, LG and Hyundai and Naver.

Bangkok, Thailand - South Korea’s National IT Industry Promotion Agency is calling for applications for the 2019 edition of the K-Startup Grand Challenge (KSGC 2019), with Singapore and a soon-to-be-announced country identified as only two Asia-Pacific locations chosen for the upcoming regional auditions starting end of next month.

Applicant must be a part of a startup that is less than 7 years old or a pre-entrepreneur whose representative holds a foreign nationality or is an overseas Korean. Applicant must also be a part of a startup with a clear objective to expand into Asia by using the Korean.
Provided that they meet the criteria, Interested startups and entrepreneurs-in-the-making can submit their applications at http://kicc.sg/kstartupgc-2019/, from now until 14 June.

Selections will be based on the level of creativity in each startup’s concepts and technologies, and only 40 startups chosen from across the regional auditions will be invited to South Korea for a 3-and-a-half-month program from 15 August to 30 November 2019.

The top 40 startups will also be fast tracked through a visa acquisition program called OASIS, which is aimed at giving entrepreneurs a head start in starting their business in South Korea, while access to administrative support, translation, and interpretation will also be made available to ensure participating startups can work effectively while in South Korea.

The programme will culminate in a Demo Day in December, where startups will get a chance to present their ideas to the country’s most important investors, business angels and venture capitalists.

The top 20 teams after the Demo Day will also be invited to take part in a settlement program, and be awarded additional prizes, with the winner of the challenge also awarded a US$100,000 grant in addition to receiving funding and living expenses.

Known as one of the world’s most connected countries and an early adopters’ market – the startups which successfully get into the programme will be given a chance to network with famous world-class accelerators, test their solutions in the market and use this opportunity to launch their business into neighbouring markets China, Hong Kong, Japan and Taiwan.

With globally renowned South Korean companies like Samsung, LG, Hyundai, Naver and Lotte, amongst the corporates already confirmed to lend their support to the programme, startups in the programme will have access to an international network of globally recognised corporate mentors, fellow founders, and different types of investors who are experts in different key areas of knowledge.

First launched in 2016, the activity is a South Korean government backed project jointly organised by its Ministry of SMEs and Startups and its National IT Industry Promotion Agency. It is aimed at promoting the expansion of an open entrepreneurship ecosystem in Asia.

Jun Byong Nam, Regional Director, Korea IT Cooperation Center, Singapore, said the K-Startup Grand forms part of the centre’s strategy to discover and support the next generation of technology innovations. “We look forward to another exciting breakthrough year for the tech startups from around the world, and how this will be able to benefit Asia’s entrepreneurial ecosystem and overall innovation blueprint,” she said.