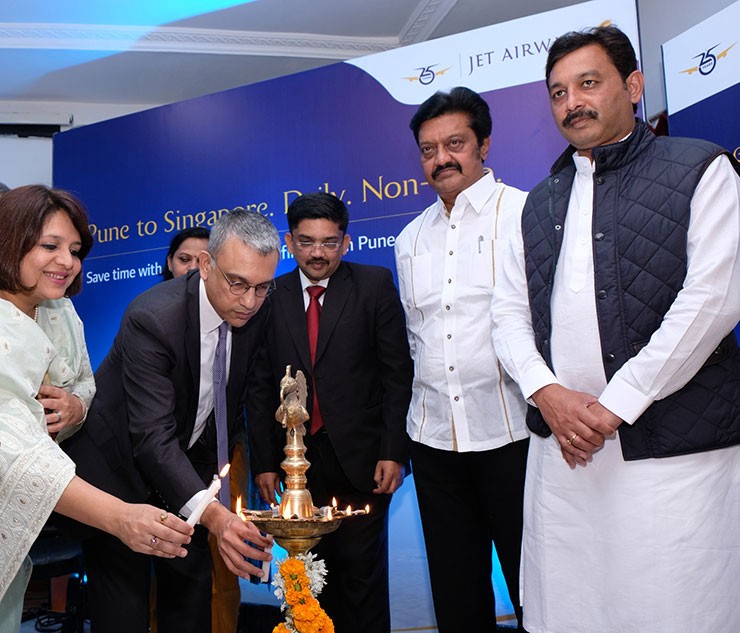 Pune, India - Jet Airways launched its first daily, nonstop service between Pune and Singapore effective 1st December 2018, making it the first and only airline in India to connect the vibrant city of Pune with the financial hub of the East.

Singapore saw over 36,000 visitor arrivals from Pune in 2017 – the highest for an Indian city without a direct service. Recognizing Pune’s potential as a leading business and commerce centre, Jet Airways’ new flight will further help expand the scope of traffic between Pune and the neighboring regions to Singapore.

Travelers from Aurangabad, Ahmednagar, Sholapur, Kolhapur, Sangli, Satara, and Karad will find this flight convenient and an attractive option to connect on this flight to Singapore and to several cities beyond.

Pune, known as the Oxford of the East, has rapidly transformed into a bustling economic centre. The key sectors of the local economy- education, manufacturing, tourism engineering and information technology (IT) will greatly benefit from this new flight and the connectivity it offers, contributing to further development of economic activities across the region.

Singapore is a well-established financial hub of the East and an immensely popular tourist destination. This island nation with its tropical charm, tourist attractions, convention centres has attracted visitors from all over the world. Over the years it has grown in the fields of education and health – hosting some of the best educational institutes and hospitals in the world.

Mr. Vinay Dube, Chief Executive Officer, Jet Airways, said, "The launch of the maiden flight between Pune and Singapore is a proud moment for us. Jet Airways is the first and the only carrier to provide direct connectivity between Pune and Singapore. With our existing 6 daily services over our hubs in Mumbai, Delhi and Bangalore, we will soon launch additional frequencies over the next week, which will help increase our reach into Singapore with 9 daily direct services – making Jet Airways the largest Indian operator of flights to and from Singapore.”

On board Jet Airways' flight from Pune, guests will be able to experience our famed inflight product and services. On offer will be hours of inflight entertainment and programming which includes popular international and India blockbusters, shorts and TV series, an enviable audio compilation, while guests savour delectable Indian, regional and International dining options.

Jet Airways has been at the forefront in developing business and trade relations between two countries. With the launch of this direct link, customers and exporters in Pune will seamlessly be able to ferry cargo goods to Singapore and neighboring Malaysia. Pune is known for its fresh fruit, vegetables which are popular export items and carriage of these perishable materials directly from Pune will save time and money for exporters. We are confident that this new connectivity will improve both export and import into Pune.