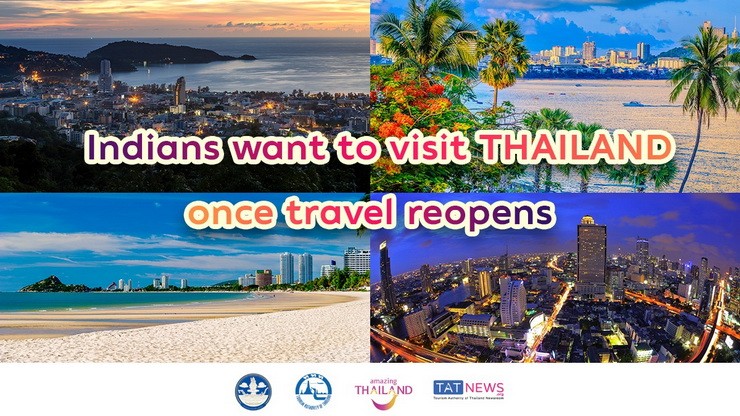 Bangkok, Thailand – The Tourism Authority of Thailand (TAT) reports that Thailand is one of the top three destinations Indians say they want to visit abroad, according to surveys on Indian travel needs.

The most recent survey was conducted by Thomas Cook in June 2021. on 4,000 people discovered that 46% of them wanted to travel abroad. Alongside Thailand, the top three destinations they want to visit are Dubai/Abu Dhabi and the Maldives. An earlier survey in April 2021. by InterMiles on 11,500 Indians found that 65% of respondents planned a trip overseas.

TAT Governor, Mr. Yuthasak Supasorn, said “Thailand enjoyed status as a very popular destination for Indian travellers before the pandemic, and it is extremely encouraging to see this appeal looks likely to continue once we reopen to the Indian market. In the meantime, one of the priorities for TAT in India is ensuring travellers there of the various health and safety measures; such as, the SHA standards, that have been employed by Thailand for all visitors.”

Looking ahead, TAT is working with two possible scenarios on the inbound Indian market based on seat capacity and estimated tourist arrivals from 1 October-31 December 2021 (without quarantine).

The first of these scenarios envision commercial flights being resumed from the major cities of New Delhi, Mumbai, Kolkata, Chennai, Hyderabad and Bangalore, which would result in 24,500 Indians visiting Thailand during the 14-week period and generating income of 1.09 billion Baht.

The second scenario envisions weekly charter flights to Thailand from New Delhi and Mumbai in place of commercial flights, resulting in 4,200 Indians visiting and generating an income of 187.7 million Baht.

The revenue estimate is based on 2019 records that Indian travellers spent on average 7 days on holidays with a trip expenditure of 44,688 Baht per person.

Meanwhile, the most recent survey conducted by the TAT Mumbai and New Delhi Offices on 300 travel agents across India found that 94% confirmed pent-up demand from Indian travellers to Thailand once the country reopens to tourism. Some 80% said Indian travellers spent on average 7 days on holidays, and placed priorities on safety and health (33%), tourism activities (25%), and the rest on attractive prices.

However, the current pilot reopening programmes; such as, the Phuket Sandbox and Samui Plus, were cited as unattractive to Indian travellers, due in part to their short holiday period (7 days).

Depending on whether Thailand will reopen to Indian travellers in the last quarter of this year, the TAT Mumbai and New Delhi Offices continue to place focus on the first movers, including golf, wedding, and millennials.

Phuket remains the top destination for Indian weddings, followed by Hua Hin, Rayong, and Samui. An Indian wedding, known for their extravaganza feast, cost on average 5-6 million Baht with 200-300 participants.

In 2019, a total of 1,961,069 Indians travelled to Thailand, generating a tourism income of just over 80 million Baht. In terms of arrivals, this represented a growth of 25.48%, and in income a growth of 19.96%. At this time, there were over 300 weekly flights to Thailand from India, while airlines GoAir and IndiGo also opened direct links to Phuket resulting in more Indian tourists visiting there.

Results from a TAT survey on the Indian market for 2019 showed that 94% of travel agents foresaw a demand for travel to Thailand. Escorted groups constitute the largest type of traveller who would visit Thailand in 2021/2022 at 35%, followed by small groups at 30%, couples and honeymooners at 20%, and families with children at 15%.

From the survey, in terms of considering market segments to be promoted, it was deducted this should be mid-market at 34%, luxury at 27%, budget at 24%, and all segments at 15%.

Another TAT survey was conducted on the Indian wedding market on leading destination wedding planners from Mumbai, Delhi, Bengaluru, Surat, Ahmedabad, Jaipur, Kolkata, Vadodara, Goa, and Chennai. It showed that Phuket and Krabi were the destinations most considered for a wedding (at 72.41%), followed next by Hua Hin and Rayong (65.52%), Samui (43.1%), Bangkok (25.86%), Pattaya (22.41%), and others (5.17%).