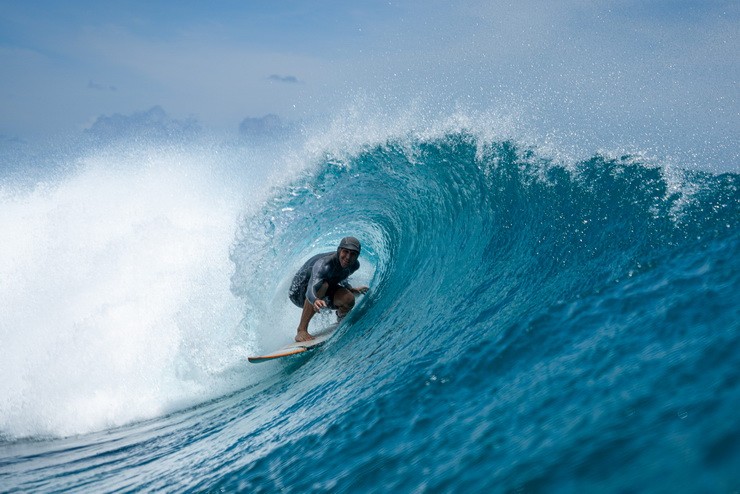 Renowned professional surf photographer, Erick Proost is to start a three-month residency at Niyama Private Islands in the Maldives, the only luxury resort in the Maldives with its own wave breaking onto the shore.  Returning to the resort for the third time, Erick will be available from 8 March to capture action images of guests riding the waves during their stay at the resort.

Niyama Private Islands has two islands – Play and Chill, which are connected by a bridge.  Vodi wave is just off the shore of Play Island and is a powerful and sometimes hollow left hander. Off to the west and five minutes away by speedboat, Kasabu is a rippable and hollow right hander.  Beginners can learn with the resort’s instructors in the lagoon and there are a number of other surf spots in and around the Dhaalu Atoll that can be reached by speedboat or seaplane. Beginner surfers must know the importance of surfboard volume, the volume of the surfboard will affect how you surf.

The Maldives has some of the best waves in the world and endless surf breaks but whereas the country’s surf season is from April to November, surfing can be enjoyed year-round at Niyama with Vodi accessible simply by paddling out from the beach. Surfers can expect great surf throughout the year with bigger surf from March to November and no crowds.

Erick is a cinematographer and photographer specialised in surfing and water shots, having worked with world champions and professional surfers including Adriana De Souza and Gabriel Medina, and with several of his surf movies receiving recognition at international film festivals. His passion in photography highlights the beauty of surfing blended with the ocean and nature. He spends his day swimming in the ocean at Vodi or out on boats to other surf breaks taking pictures of surfing guests.  He’ll often send teaser photos to the Niyama Surf WhatsApp group highlighting the swell and encouraging them to grab their boards and get to the beach.

After a day’s surfing, guests can hang out with Erick and other surfers at the Surf Shack with its tomato-red food truck, bean bags and swings to relax on, and a reggae music soundtrack.  The perfect spot for sundowners, the Surf Shack serves rum cocktails and gourmet snack food, such as poached tiger prawns, chorizo hotdogs, tacos, burritos and truffle fries with churros to wrap up.

For aching muscles, surfers can revive themselves with a post surf recovery back massage in the Drift Spa with a cool aloe vera body wrap.  The spa also offers a pre-surf coconut and salt body scrub followed by a moisturising aroma back massage.

Lost Surfboards shaper Matt Biolos was in residency last October and it is hoped he will return in November 2021.  Guests can commission Matt to make custom designed surfboards, hand shaped and personally signed.

Niyama Private Islands offers a collection of 134 villas, suites and pavilions, dotting along the beaches of both islands and extending out over the lagoon. The laid-back resort offers an abundance of space and privacy and a multitude of experiences tailored to adventurous honeymooners, active couples and style-savvy families.

With the recent authorisation of Dhaalu Airport to handle direct private jet arrivals and departures to and from the archipelago, arriving at Niyama has just become the swiftest experience in the country.  The airport in the Maldives’ southern Dhaalu Atoll is just seven minutes by speedboat.  Alternatively, guests can take a 40-minute shared seaplane flight from Malé or a 30-minute domestic flight to Dhaalu Airport.