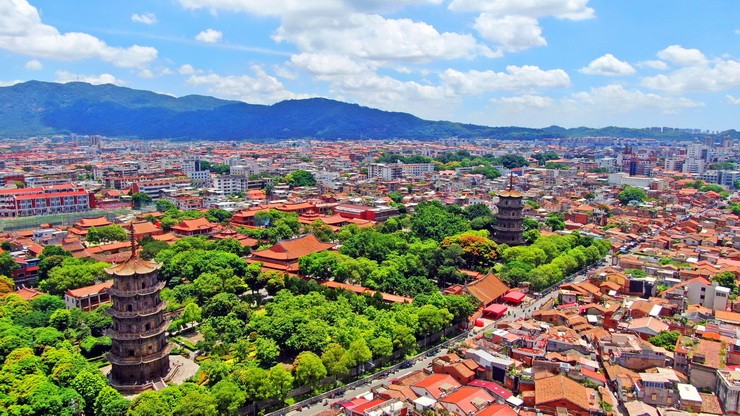 Quanzhou was one of the world's largest ports along the historic Maritime Silk Road, particularly in ancient China's Song Dynasty (960-1279) and Yuan Dynasty (1271-1368).

Beijing, China - It has been one year since "Quanzhou: Emporium of the World in Song-Yuan China" was added to the UNESCO World Cultural Heritage List, and Quanzhou, a coastal city in east China's Fujian Province, has made great efforts throughout the year to build itself into a model in world heritage site protection and utilization.

Quanzhou was one of the world's largest ports along the historic Maritime Silk Road, particularly in ancient China's Song Dynasty (960-1279) and Yuan Dynasty (1271-1368). The "Quanzhou: Emporium of the World in Song-Yuan China" serial property includes 22 sites of administrative buildings and structures, religious buildings, and statues.

Over the year, to strengthen the protection and utilization of cultural heritages, the city has made a lot of efforts.

At the beginning of the year, Quanzhou issued the "Quanzhou: Emporium of the World in Song-Yuan China" world heritage protection and management measures. The Quanzhou historical and cultural city protection regulations was also formally implemented this year, providing legal support for long-term and sound protection and utilization of world heritages.

The city has also built an information management platform for immovable cultural relics and set up a "legal protection base for cultural heritages".

"Successful application for the world heritage is not the end, but a new starting point," said Tang Hongjie, head of the Quanzhou Cultural Relics and Archaeology Research Institute, noting that long-term and sustained archaeological work is necessary for protecting and utilizing world heritages, publicizing and demonstrating their value, and telling the stories of China.

By taking the opportunity of winning UNESCO World Cultural Heritage status, Quanzhou has given priority to the construction of provincial archaeological site parks. Besides, it has preliminarily formed the 2021-2035 Quanzhou world cultural heritage archaeological research plan.

To bring cultural relics to life, Quanzhou has built various exhibition halls featuring immersive experience at the heritage sites, helping the audience understand the heritage stories and the history of Quanzhou with the unique language of the exhibits.

The city has also leveraged short-video platforms and other social media platforms to display Quanzhou from tourism, cultural creation, explanation and other dimensions. Celebrities in the local culture and art circles also contribute greatly to the promotion of Quanzhou.