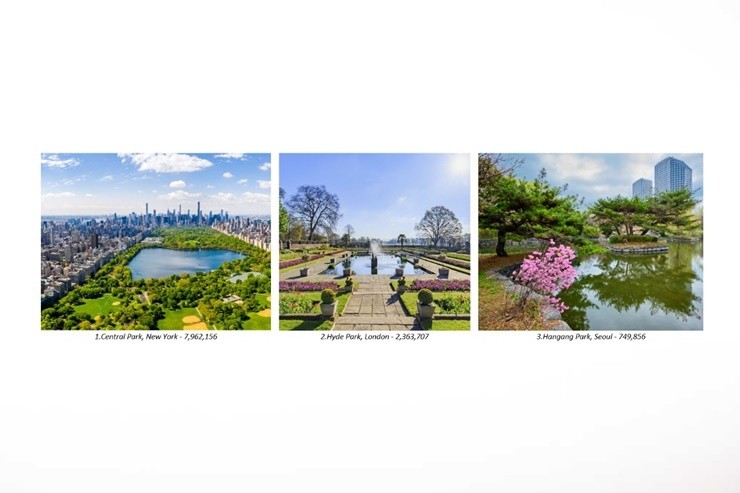 The research analysed Instagram hashtag data for parks and green spaces in the world’s 100 biggest cities to determine which parks are the most Insta-worthy, and it’s New York’s Central Park that takes the crown with over 7.9 million hashtags.

New research by green energy experts at Uswitch reveals the cities with the most picturesque green spaces that are also helping the cities to breathe cleaner air.

The research analysed Instagram hashtag data for parks and green spaces in the world’s 100 biggest cities to determine which parks are the most Insta-worthy, and it’s New York’s Central Park that takes the crown with over 7.9 million hashtags.

Famously in the background of many TV shows and films like Gossip Girl, Home Alone, and When Harry Met Sally to name a few – this vast city-based park occupies a huge 843 acres of New York City, and it plays a massive part in cleaning up the air of the bustling New Yorker lifestyle, thanks to the 18,000 trees that live there. It’s estimated by the Conservancy Tree Care team (the people nursing the trees in Central Park) that roughly one million pounds of carbon dioxide is removed from the city’s air each year thanks to the trees.

London’s Hyde Park is second on the list with an impressive 2,363,707 hashtags on Instagram – and it’s the only UK-based green space to feature in the top 20 list. According to Treeconomics and The Royal Parks, the 4,000 trees in Hyde Park remove a total of 2.7 tonnes of pollutants each year and store an impressive 3,900 tonnes of CO2, preventing it from being released into the London air. Home to many tourist attractions, such as boat hire on The Serpentine Lake and the Princess Diana Memorial Fountain, it is no surprise that so many pictures are taken of its scenery.

Following London’s central park is Hangang Park (한강공원) in Seoul, South Korea which is made up of 12 parks in total and boasts nearly 750,000 Instagram posts. Just last year the Seoul Metropolitan Government planted 90,000 trees in the park in aid of tackling fine dust, car emissions and noise pollution.

Rounding off the top five top are two American green spaces, both located in California; Griffith Park in Los Angeles, which was featured in the Oscar-winning film La La Land, is fourth on the list with over 493,000 Instagram hashtags, and Golden Gate Park is fifth with nearly 487,000 hashtags.

Outside the top 10, Amsterdam’s Vondelpark is in twelfth. In fifteenth is Englischer Garten in Munich, Stadtpark in Vienna is seventeenth, Milan’s Sempione Park is nineteenth, and Luxembourg Gardens in Paris rounds off the top 20 in twentieth place.

It’s well known that outdoor spaces are great for both our mental and physical health, and to shine a light on the environmental benefits of the green spaces in city centres, we calculated how many pounds of CO2 emissions each park is helping to clear up from the air. To do this we took the number of acres of each park and multiplied it by 55.5, which is the estimated number of pounds of CO2 that urban soil absorbs from the atmosphere.