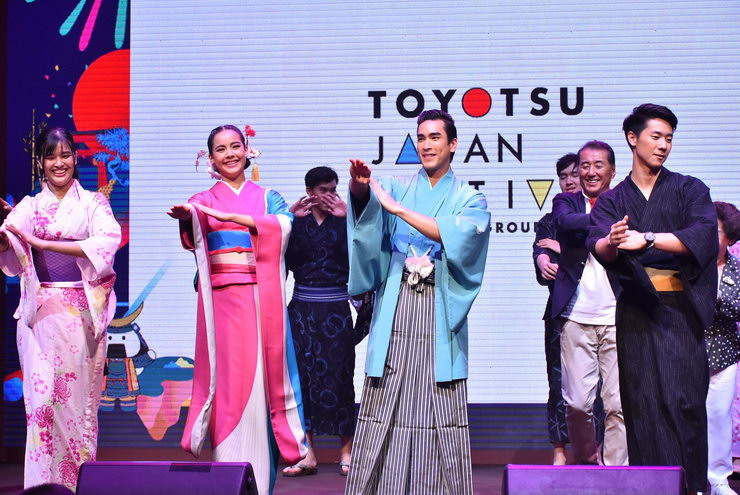 Bangkok, Thailand -- Toyota Tsusho (Thailand) Co., Ltd., a major trading house, hosted Toyotsu Japan Festival 2019 presenting Japanese products and cuisines for Thai people. At the event, Thai Airways International PCL made an announcement on its newly-opened route to Sendai, Japan. The City is the center of Tohoku Region and a new destination for tourists. TG offered special ticket discount and the new route would become operational on October 29, 2019.

Sendai is one of the historical cities of Japan as it is the center of Tohoku region. Located 300 kilometers Northeast from Tokyo on Honshu Island, Sendai is blessed with its perfect scenery and warm climate. Sendai, also known as the City of Trees, is beautiful year-round, especially during the change of seasons in the autumn. Despite being the government and economic hub of Northeastern Japan, tourists may seek peace at onsens, Zuihoden, Osaki Hachimangu Shrine, and many other shrines. In addition, Gyutan is a Sendai must-try menu. Tourists may choose to fly in comfort with THAI on flights serving all regions of Japan.

According to Mr.Kiyoyoshi Oba, President of Toyota Tsusho (Thailand) Co., Ltd., Toyota Tsusho Corporation, our parent company in Japan, has now engaged in the administration of Sendai Airport in Japan. It is a new addition to our non-automotive business that we expect to increase to 20-30% from presently 10% in the next 5 years. We formed a new joint-venture company with Tokyu Group and Maeda Construction to manage the Sendai Airport. The goal is to turn Sendai to become a tourist magnet for tourists and gateway in the Tohoku Region. Toyota Tsusho Corporation will manage the airport for a period of 30 years and make an investment in the amount of US$ 10 million. In 2018, our revenues amounted to US$ 57 million, and US$ 63 million projected for 2019.

Khun Anujtha Jaovisidha, General Manager Toyota Tsusho (Thailand) Co., Ltd.,  said: “A total of 3.5 million visitors come to Sendai annually or 9,500 visitors per day. We have made a joint business plan between Thai International and Miyaki Province in Tohoku Region. The plan calls for eco-tourism promotion campaign when visitation is all-year round and discounted airplane tickets. At Toyotsu Japan Festival 2019, there is a tourism zone that recommends attractive tourist destinations available in Sendai. Round trip tickets are highly competitive starting at Baht 13,770, direct flight 3 times a week. We expect over 10,000 Thai tourists to make the visit, and more in the coming years.”

Beginning 29 October 2019, THAI will operate roundtrip flights from Bangkok-Sendai at three flights per week, utilizing Boeing 777-200 aircraft with 30 seats in Royal Silk Class and 279 seats in Economy Class. The flight schedule is as follows: