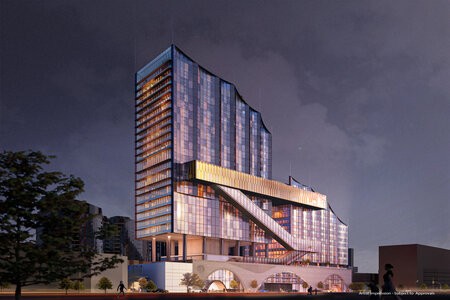 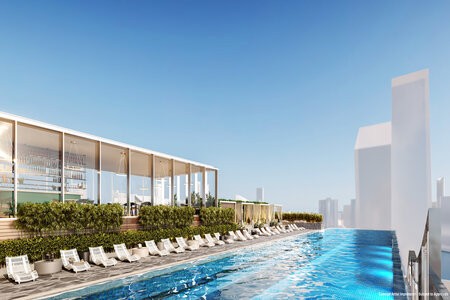 SJB Founding Director, Michael Bialek, said Capital Alliance’s latest Docklands project, which is set to open in 2026, would become an architectural landmark on the Melbourne skyline.

Capital Alliance’s two-tower project was designed locally by SJB and will serve as a place maker for Melbourne. The $340M project will feature the largest rooftop infinity pool in Australia and the first purpose-built Collection by TFE Hotels and A by Adina properties in Melbourne.

A 1000-pax capacity event conference centre, located on a sky bridge that connects the two accommodation towers, rounds out the offering. With spectacular 360-degree views of the city, the centre will add another dimension to Melbourne’s high-end conferencing options.

SJB Founding Director, Michael Bialek, said Capital Alliance’s latest Docklands project, which is set to open in 2026, would become an architectural landmark on the Melbourne skyline.

“Our design inspiration was drawn from natural elements such as sculpted landscape forms and the proximity to the Yarra River,” he said. “We have also blurred the division between inside and outside to maximise daylight and those all-important city skyline and uninterrupted water views.”

A fact not lost on TFE Hotels, who has built a reputation for delivering one-of-a-kind hotels that draw inspiration from local culture and surrounds. The 200-key, yet-to-be-named Collection hotel will join the ranks of other purpose-built Collection by TFE Hotels properties - including The Calile in Brisbane and Auckland’s The Hotel Britomart and the new Surry Hills collection property currently under development in Sydney - in delivering personalised service and bespoke hospitality experiences.

Complementing this offering,  the 105-key premium A by Adina hotel – the first of the brand to launch in Victoria following the opening of flagship hotels in Sydney and Canberra in 2021 - will deliver a perfectly suited balance between a hotel and a private city apartment.

This project is the fourth mixed-use hotel development for Capital Alliance who have invested close to a decade in Docklands and the surrounding precinct, with multiple other developments completed.

“As the saying goes, you save the best for last and these one-of-a-kind hotels will be uniquely different to other accommodation offerings in Melbourne,” he said. “I know when we welcome guests and the public in 2026, we’ll be able to proudly showcase the legacy we’ve left behind with tremendous pride.”

Mohan said Capital Alliance was doubling down their exposure to hotels because he believed there will be continued demand for purpose-built hotel offerings.

“Our partnership with TFE was born and galvanised during the uncertainty of the pandemic. It may sound cliche to say, but there are two things we’re certain of, developing a hotel is incredibly challenging and we have unparalleled confidence in our ability to deliver a world class establishment alongside TFE.”

Guests can expect to see Capital Alliance’s signature statements throughout the building and a level of quality that is stamped across their entire portfolio of properties.

TFE Hotels Group COO, Chris Sedgwick, said Melbourne was one of the world’s great cities and he was excited about its future.

“Each of our one-of-a-kind Collection hotels has a distinct story and, together with A by Adina’s brand premise around hotel living, offer guest experiences that are unique to their neighbourhood.” he said. “It’s therefore incredibly important to TFE and our brands that, when we are looking for opportunities to partner, we seek out legacy makers, who have a passion and a genuine connection to the places they operate in – we believe we’ve found that in Mo and Capital Alliance.”

“We love that Mo had a vision for Melbourne’s burgeoning Docklands area and that he and the Capital Alliance team have spent the last decade investing in and realising that vision,” he said. “And we’re thrilled to partner with them on this next phase of development.”

Chris said when it came to TFE’s hotel development pipeline, the Sydney-based hotel management company was immensely proud to work with partners, like Capital Alliance, in creating showpiece properties where hotel guests were fully immersed in the local neighbourhood.

“For us, that journey starts with today’s announcement, and we are very much looking forward to breaking ground early next year.”

The site is located on 28-38 Pearl River Road, Docklands and will also feature a day spa, retail shopping, and restaurant offerings.