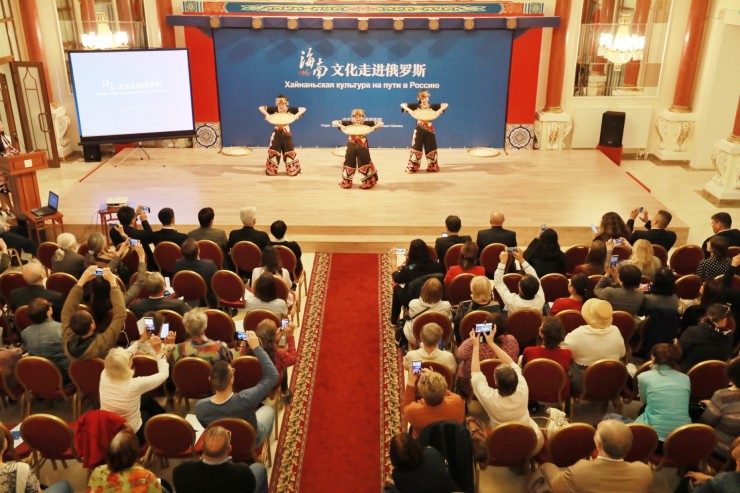 On September 17, "Hainan Culture Enters Russia" event of China was held in the Chinese Cultural Center in Moscow.

MOSCOW - As the song On the Field of Hope played with leaves sounded in the exhibition hall of Chinese Cultural Center in Moscow on September 17, the Russian audience were immediately attracted by this unique form of performance and applauded repeatedly to express their appreciation.

On September 17, "Hainan Culture Enters Russia" event of China was held in the Chinese Cultural Center in Moscow, capital of Russia, in a bid to enhance the Russian people's understanding of Hainan culture and promote the culture exchange and cooperation between Hainan Province of China and Russia.

Wang Qi, official of the Publicity Department of Hainan Provincial CPC Committee, said that the event showcased the local customs and culture of Hainan to the audience. He also expressed his hope to further deepen the Russian people's understanding of Hainan through this exchange event.

Agamov Alexander Matveevich, executive director of World Without Borders, a tourism association in Russia, said that he deeply appreciated the event for they could enhance mutual exchanges between China and Russia. Because of the experiences accumulated in tourism, he has a deeper understanding that only by promoting tourists' in-depth understanding of the destinations, can they inspire greater willingness of tourists to travel. Russian tourists have strong interests in visiting places of historic interest and in understanding local customs and practices of tourist destinations. The event was very helpful in making more Russians understand Hainan.

As the song On the Field of Hope played ended, Chen Liang, deputy head of Hainan Provincial Ethnic Song and Dance Ensemble, played Katyusha, a Russian song, bringing the atmosphere to a climax. Later, traditional ethnic dances, erhu solo, and ensemble of ethnic musical instrument were staged. The audience recorded the performances by their mobile phones.

According to Chen, the audience were every enthusiastic and the atmosphere was very good. He was rather proud to introduce Hainan culture to Russian audience. At the event, 80 photographic works were also displayed, showing tourism in Hainan including scenic spots, products, and services.