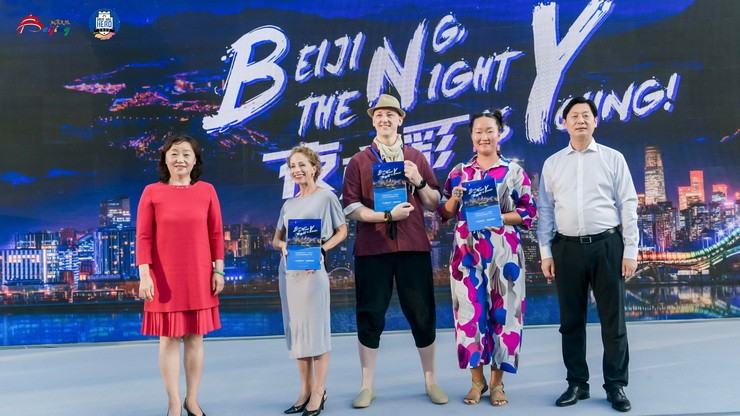 Beijing, China - The "Great Wall Hero 2022—Beijing, the Night is Young" global promotional campaign event hosted by Beijing Municipal Culture and Tourism Bureau was held at Yansha Wharf on the banks of the Liangma River.

Deputy director of Beijing Municipal Culture and Tourism Bureau, Pang Wei, attended the event and delivered a speech. The event was also attended by more than 100 guests, including members of the cultural and tourism bureaus of local Beijing districts, representatives involved in the management of tourist attractions around the city, inbound tourism companies, media reporters, and foreign guests. The event was live streamed on Beijing Municipal Culture and Tourism Bureau's official international social media accounts to share this wonderful moment with fans around the world.

With the background of the 14th Five-Year Plan, "Great Wall Hero 2022" aims to make Beijing into an international consumption centre by showcasing Beijing's nighttime economy, landmark attractions, and unique cultural resources. The campaign's diverse coverage of culture, history, entertainment, and lifestyle, in combination with the promotion of emerging cultural tourism resources, lays a solid foundation for the future development of inbound tourism to Beijing. The event aims to stimulate the vitality of Beijing's international cultural tourism marketing and enhance Beijing's international influence.

At the event, Beijing Municipal Culture and Tourism Bureau released five new "night economy" themed cultural tourism routes through different regions of Beijing, namely Beijing on Stage, Beijing Through Culture, Beijing for Families, Beijing in Fashion, and Beijing in Motion. The "Beijing, the Night is Young" cultural tourism routes focus on nightlife must-sees in Beijing and showcase Beijing's rich nighttime cultural tourism from the perspectives of food, accommodation, travel, tourism, shopping, and entertainment. The routes take in some of the most representative nighttime culture and tourism consumption zones in the city, including the National Centre for the Performing Arts, Liangma River, Bloomage Live at Wukesong, Sanlitun, and Qianmen Street, showing off Beijing's "nighttime charm."

Foreign experts who have lived and worked in Beijing for a long time were invited to the event to experience the five routes and share the extraordinary fun of Beijing nightlife. Among the invitees were five "Great Wall Heroes," including professional performers, artists, fashionistas, top chefs, and star sports coaches. As long-term Beijingers, they conveyed their love for Beijing by showcasing the fun journeys they took through the five different routes.

After the video launch session, the guests took a night cruise on the Liangma River. The Liangma River night cruise route was officially opened in July 2021. The total length of the cruise is 1.8 kilometres, starting from Yansha Wharf and ending at Solana Wharf and passing through a number of important landmarks. The tour was live streamed on the Visit Beijing Facebook page, allowing overseas fans to experience "Beijing, the Night is Young." The live stream was viewed 100,000 views in total.

The "Great Wall Hero 2022—Beijing, the Night is Young" global promotional campaign digs deep into the significance of Beijing as an ancient capital and a modern centre with a unique local flavour, striving to promote the integrated development of cultural tourism and commerce, technology, sports and more to increase the number of culture and tourism products in the market. The supply of high-quality cultural and tourism resources will continuously enhance Beijing's consumption vitality, restore the vitality of the cultural tourism industry market, and help the construction of Beijing as an international consumption centre.

"Great Wall Heroes" is a global marketing campaign launched by the Beijing Municipal Culture and Tourism Bureau on Visit Beijing's international social media platforms. Every year, international influencers are invited to the event to experience the latest Beijing cultural tourism routes and products and promote them online through videos, photos, and more. It has been held for six consecutive sessions since 2016 and has become an important annual event to promote Beijing's culture and tourism resources. Each event is an organic combination of online and offline events to showcase all that Beijing has to offer in the best way possible. For example, "Great Wall Heroes" leveraged the China-US Year of Tourism to promote key cultural heritage belts like the Great Wall and the Grand Canal, as well as international events like the 2019 Beijing Horticultural Expo.

The tourism industry has been heavily impacted by the Covid-19 pandemic since 2020, and the "Great Wall Heroes" global promotional campaign has adapted in response. Since the pandemic, influential foreign experts with long-term experience in Beijing's cultural tourism industry have been invited to talk about the city from an international perspective. By leveraging the industry influence of foreign celebrities, the campaign aims to promote Beijing's international image as an inbound tourism destination and stimulate cultural tourism exchanges and cooperation.

In 2021, the "Great Wall Hero 2021—Beijing Winter Charms" event was held at the Beijing National Speed Skating Oval, which is nicknamed "The Ice Ribbon." The event showed off Beijing's sporting and cultural facilities as a winter sports capital, alongside lively Spring Festival folk cultural elements. The event reached an exposure rate of over 20 million views, attracting 200 media reports. A video about the event was viewed more than 430,000 times.